Lessons from a successful think tank 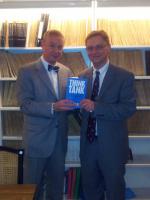 After discussing the specificity of the think tank as an independent influence on policy, and the nuts and bolts of policy-making during Thatcherism in the UK, Madsen Pirie offered the following conclusion.

“The proposals made by the Adam Smith Institute were successful, not because they had been intelligently conceived in order to be politically realistic and acceptable, but because they were right.

Experience teaches us that if you leave people free to engage in trade with minimal government constraints in terms of regulations and taxes, they will fare so much better than if the state tries to seize control of the economy.

Alexander the Great once made the journey to meet the great philosopher Diogenes, and found the wise man sitting under a tree outside the city. He asked him whether, with all his might, he could do something to help. Diogenes answered: “Yes, stand a little out of my sun.”

This is just what we ask from the state. Most policies that we propose are designed to get government out of the sun and let entrepreneurs do what they do best: create wealth and prosperity. As think tanks, our task is to find new ways of making this approach attractive, and thus encourage governments to follow.”

Madsen also published his own account of the Paris visit.

Individual responsibility and social preferences for redistribution: an experimental study