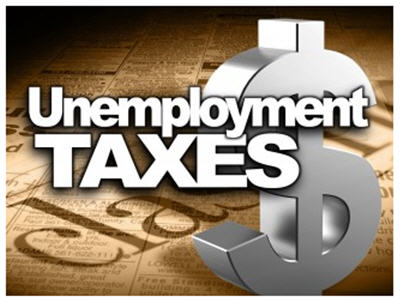 An age-old phenomenon: Some unemployment exists and politicians want to fight it by creating conditions for new jobs. The usual recipe involves expanding government spending and investment programs. Figures for OECD countries show that places with low taxation of labour tend to exhibit low unemployment low and high levels of individual annual work hours. For politicians this serves as a much more promising recipe for politicians: the best way of “creating conditions for new jobs” and lowering unemployment is to reduce the tax burden on labour.

Internationally there are large differences in unemployment

When one compares the unemployment record internationally, it becomes clear that the rates can differ very much from one country to the next. In 2014, countries like South Korea and Japan recorded relatively low unemployment rates of 3.5% and 3.6% respectively, while the US or Turkish rates were considerably higher at 6.2% and 9.9% respectively.

Combating unemployment: Agenda for many politicians

Politicians often argue about the best way of combatting unemployment and creating conditions for new job. Regularly this involves proposing and enforcing increases in government spending and new investment programs.

A good example is the EU investment programme promoted by the Commission President Jean Claude Juncker-investment package of the European Union. The Commission should function as a sort of bank to the tune of some 315 billion euros, and “make investments”. Member state taxpayers, who will ultimately have to finance the project, bear involuntarily the risk of failure of the project.

Unemployment is higher in countries with high labour taxes

Such conclusion may be drawn from the recently published OECD data for country-specific tax on labour in 2014, contrasted with the unemployment rates at the end of 2014. OECD examines annually in 34 countries the level of taxation of labour in the form of income taxes and social security contributions (which are essentially a labour tax). 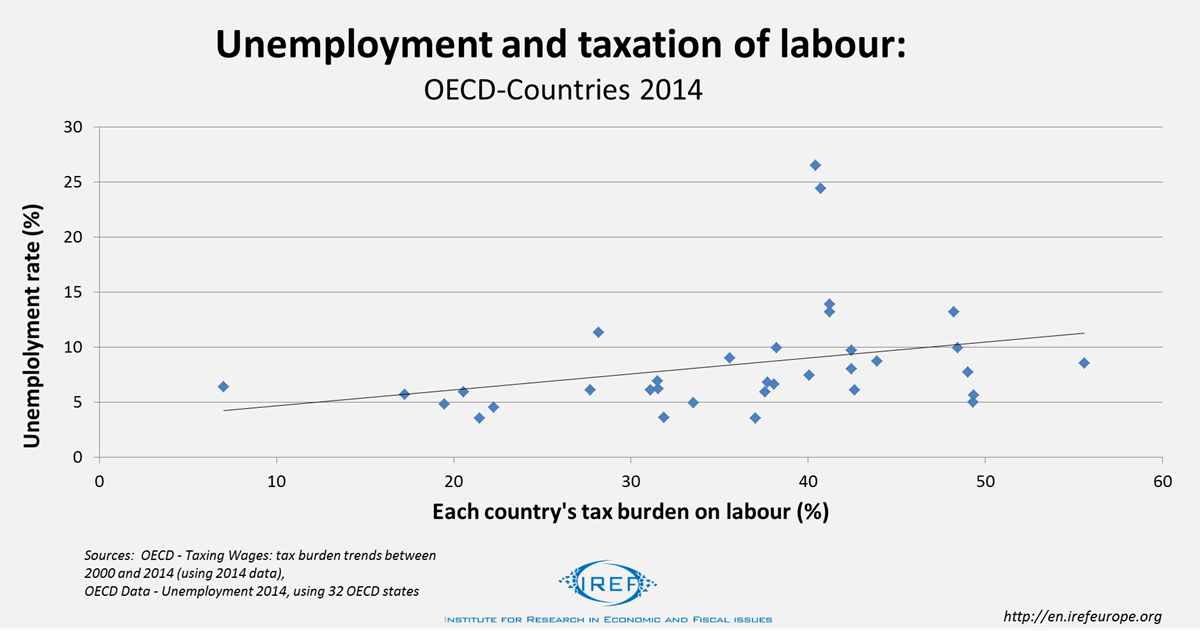 When we compare the OECD data on labour taxation with those measuring total hours worked provided for each country by organisation called “Conference Board” (2013 is the latest year available), we find that lower taxes are generally associated with high levels of time worked, both per employee and per member of working age population.
States with a lower rate of labour tax have on average higher working hours per person employed. More units of work measured in hours are recorded as exchanged between buyers and sellers. This insight is not new. The Nobel Prize winning economist Edward C. Prescott pointed it out in a famous paper which explains higher annual working hours in the United States by differences in tax rates between Europe and the USA. 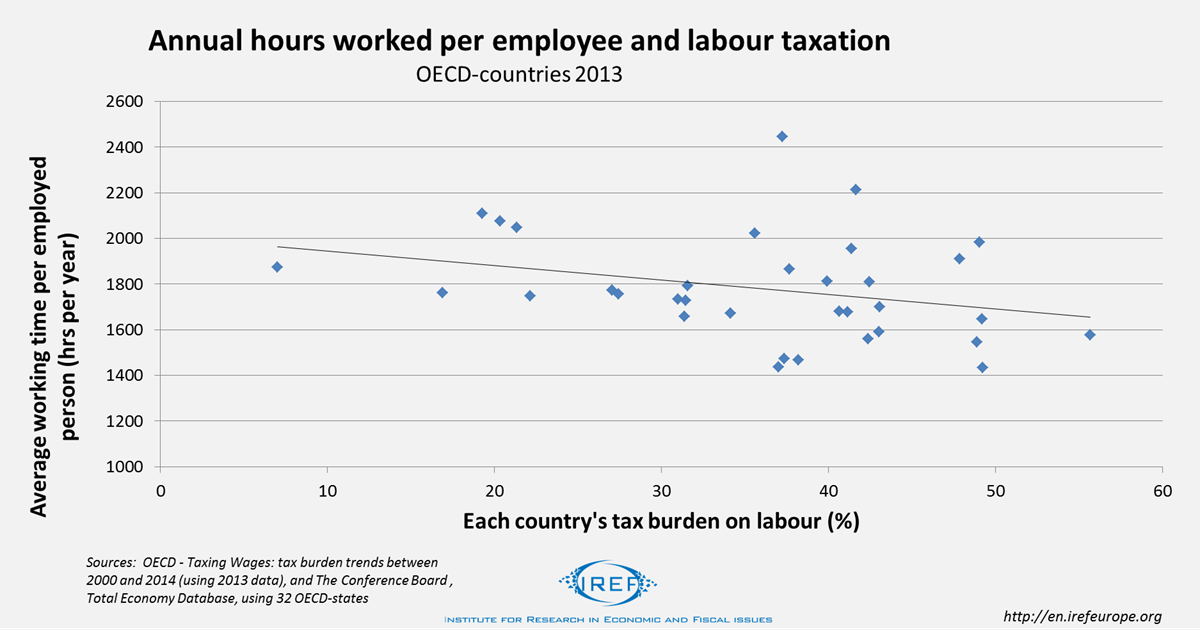 The differences both in terms of annual hours worked as well as of wage taxes are striking. An employed person, say in Israel, works on average 2075 hours per year. His wages are subject to a relatively low tax rate of 20.4%. In Sweden, the wage tax burden is considerably higher at 43.0%, and an average worker works only 1591 hours per year.

A similar picture emerges when the OECD data on work taxation are set against figures on average working time of 15-64 year olds (working age). Countries with lower taxes on labour have higher average working hours of the working age population. 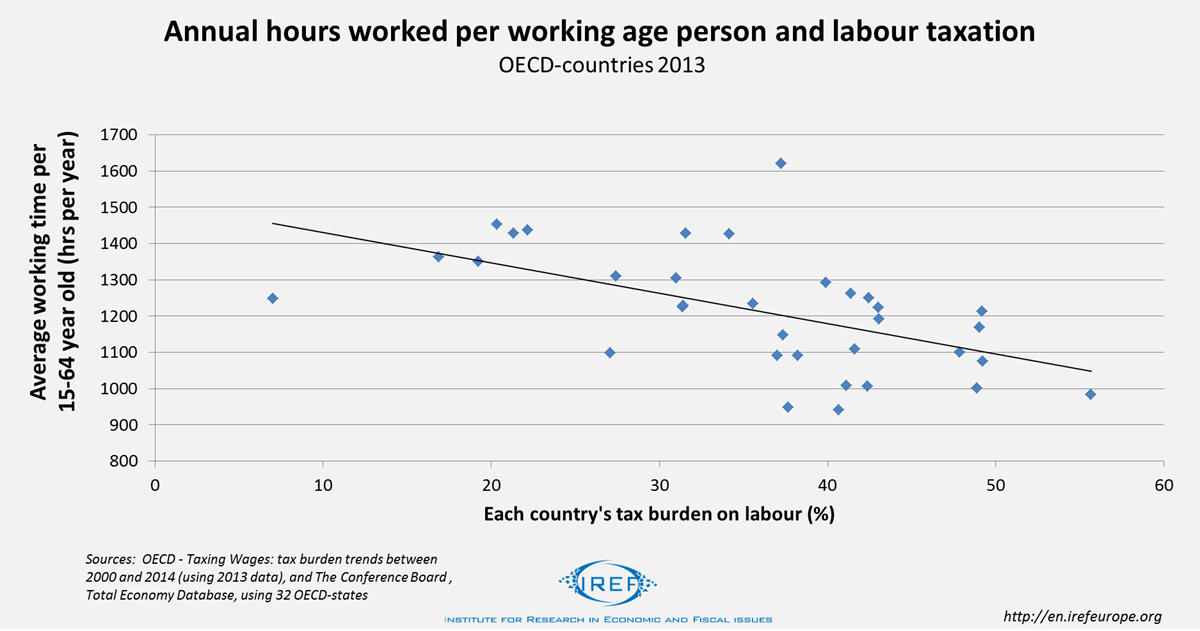 The fact that the link between lower labour taxes and higher annual work hours also holds for this category suggests one thing: faced with a lower labour tax burden, not only do the already employed sell more units of work, but also more people overall are drawn to sell their work hours on the market, and the unemployment rate falls.

These international data suggest that there is a simple remedy to successfully combat unemployment: Reduce the tax burden on labour. A reduction in the burdens of income tax social security tax would make it more attractive for employees (suppliers of labour) and employers (demanders of labour) to make an exchange.

When more labour is exchanged, there is a lower probability of each person finding themselves partly or fully involuntarily unemployed. As an additional benefit, of course, people spend more time in productive activities which result in additional goods and services. Nobody is forced to do any more work. People simply react to changes in (tax) incentives.

(This article has been translated from the German original by Petr Barton.) 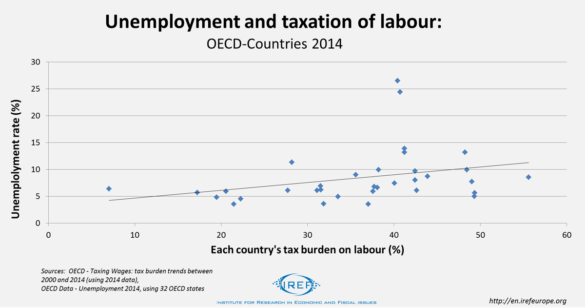 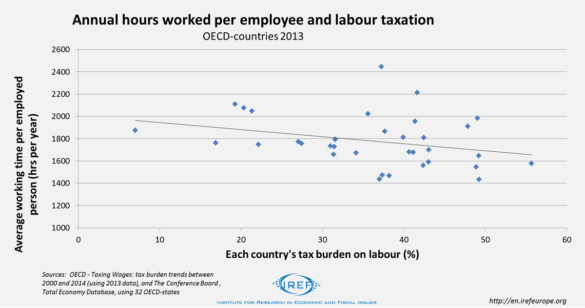 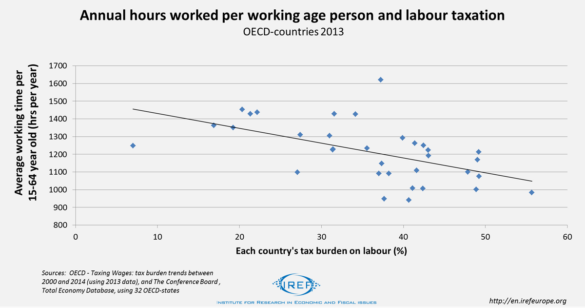