Just two and a half years after planning began, Tesla’s “Gigafactory” on the outskirts of Berlin went into operation at the beginning of April. Meanwhile, the construction of Berlin Brandenburg Airport (“BER”), just a few kilometers to the west, dragged on for 14 years until its opening in 2020. Bureaucratic hurdles and local activism hampered both major construction projects. But Tesla outperformed the predominantly state-funded “BER” in speed and cost effectiveness. A comparison of the Berlin construction projects illustrates the advantages of private-sector sponsorship.

At the end of 2020, the new Berlin Brandenburg Airport opened its gateways after fourteen years of construction. It has long been seen as an example of the chronic planning failure that afflicts many major projects and infrastructure schemes in Germany. The original opening date in November 2011 was postponed seven times after years characterized by  chaos and corruption. Initially estimated at 1.9 billion euros, construction costs grew to more than 6 billion euros. When “BER” finally opened in October 2020, the airport was technically at the level of the last decade, and in need of billions of euros in subsidies to operate. 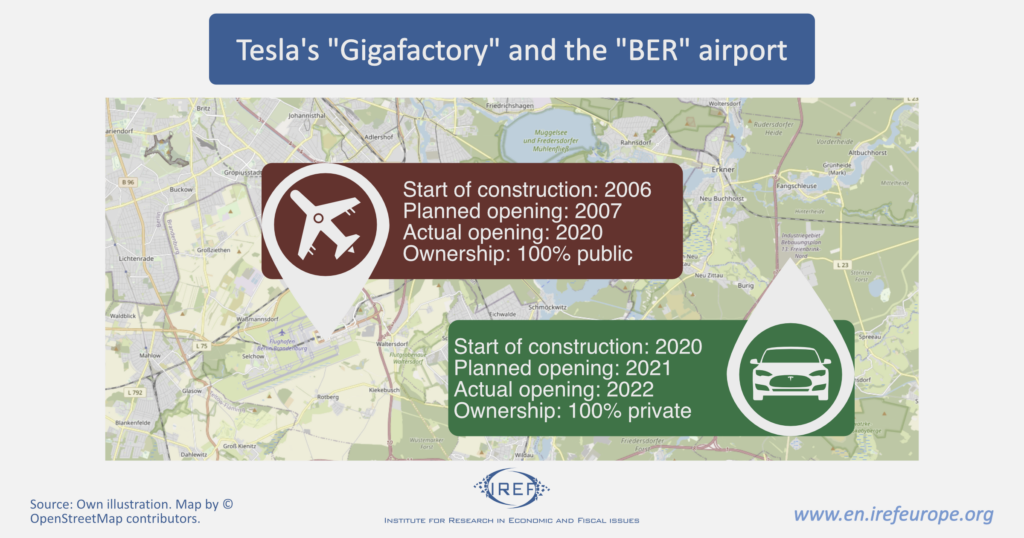 Meanwhile, about 25 kilometers away in the Berlin suburb of Grünheide, the new “Gigafactory” of EV manufacturer Tesla went into operation in April 2022. It took just two years from the start of construction to the beginning of production, after production was postponed by about a year due to delayed approval proceduresand a short-lived controversy over water use conditions. Little is known about construction costs, but they are likely to be in the low single-digit billions. Contrary to original speculation, Tesla is foregoing possible billion-dollar subsidies for the battery factory.

Major projects such as BER-Airport and Tesla’s Gigafactory are in the public spotlight because they can significantly boost regional economic development. The effects are in the form of direct employment and incomes. For example, Tesla’s plant will initially employ about 12,000 workers. But that is supposed to be just the beginning. Tesla CEO Elon Musk dreams of 40,000 employees in the area around the “Gigafactory” in the long term. According to the Brandenburg Economic Development Corporation estimates, up to 45,000 new jobs have already been created in the area surrounding the airport. These are only rough estimates, but the rapidly rising land prices and the ongoing construction boom in Schönefeld and Grünheide makes it clear that the regions mentioned have high growth potential.

The costs involved are of course significant, and part of them are financed by the taxpayers. Moreover, one should take into account the possible decline in economic activity suffered by regions competing with the areas involved in the mega-projects mentioned above. Last but not least, both projects ran the risk of failure even before the saw the light, possibly torpedoed by misplanning and corruption (BER), and by German planning law and the opposition by local activists (Tesla’s “Gigafactory”).

However, one fundamental difference stands out: “BER” is 100% publicly owned, whereas Tesla is a listed private company. Private companies exposed to competition and shareholder oversight have an incentive to make more realistic cost and risk assessments than their government counterparts. The financing of public projects, on the other hand, is not a matter of free choice. Taxpayers have little incentive to question the risk of major public projects. Not surprisingly, policymakers are likely to prefer unrealistically favorably valued investments, regardless of their costs. At the beginning of the planning process at the end of the 1990s, political leaders considered having a private consortium build the new Berlin airport. When private business withdrew because of the exceedingly high predicted costs, politicians decided to go along all the same, and let the taxpayers shoulder the risk and pick up the tab. They are still paying dearly today.

By contrast, the risks for taxpayers associated with Tesla’s “Gigafactory” are limited to the usual subsidies for improving the regional economic structure, around 100 to 270 million euros. Tesla’s risks were by no means small because when construction of the car factory began, Tesla was still waiting for the necessary permits. Failure to obtain the green light would have cost dearly to Tesla, but the taxpayers would have been spared.

The Eurosystem: a parasite serving only the needs of the Eurozone public sector