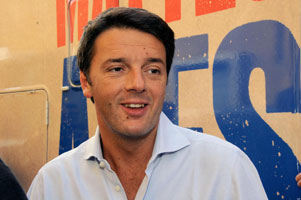 Of all the shortcomings of the Italian economy, youth unemployment (40%) is the most worrying. The new Prime Minister, Matteo Renzi, took up this issue through labor law reform since it was outdated and harmful. Will he succeed where Mario Monti failed? Yet what happened at Fiat’s may be hopeful.

The new Italian Prime Minister, Matteo Renzi, quickly announced a comprehensive reform program, including labor law, named in English: “Jobs Act”. The unemployment rate in Italy is slightly higher than in France: 12.7 % vs 10.5 %. Yet, in Italy, youth from 16 to 25 is badly hit with an unemployment rate exceeding 40%.

The situation of young people is quite dramatic and is confirmed by polls showing that more of 48 % of the Italian young people want to go working abroad. Facing this problem, Matteo Renzi wants to simplify the Labor Code in order to introduce more flexibility. For example, judges would lose the ability to force companies to rehire laid-off employees. Parallel contributions on wages should fall sharply.

In Italy as in France, the worst enemy of employment is the labor law. Thought out in the 1970’s, right in the middle of the Marxist period, the principles governing the labor market are so strict that it is virtually impossible for an employer to dismiss an employee.

There is even the famous Article 18 of the Statute of the worker that forbids an entrepreneur to sack an employee who would be acknowledge as incompetent. Dismissal can only take place if proofs of “negligence of the employee” are provided, as detailing in which matters “he has not achieved its goals.”

The dismissed employee may file a complaint to the Tribunal, and if the judges felt that he was unfairly dismissed, the entrepreneur must rehire unless he pays him at least pay 15 month salary! These very barriers were attacked in 2012 by Mario Monti and his labor Minister, Elsa Fornero, without much success. Yet, it should be acknowledge that Mario Monti introduced the liberalization of the Italian railways. The first Italian private high-speed train was launched in April 2012 on the Bologna -Naples line. The following month, the entire national rail network was liberalized. Many investors are now active on the Italian market, including… the SNCF that has taken shares (20%) on the high speed network.

Matteo Renzi should be in office till 2018 and has four years to enforce his reforms. However, it is difficult to believe that his government, which does not have a strong majority, will hold that long, especially as Italy is a country accustomed to fast changing governments. Furthermore, economic growth is vanishing: after 2.5 % in 2012 and 1.9 % last year, it is forecasted at only 0.6 % in 2014.

However, as regards the labor market, Matteo Renzi could be inspired by… Fiat. In January 2011, the Fiat factories employees in Italy have approved a plan that dramatically changed their employment contract. In exchange of wage increases (around 3.500 euros per year), the workers accepted more flexibility: schedules were extended without the unions agreement, breaks were reduced as well as holidays. Similarly, the right to strike has been drastically limited since it was a common practice in these union-controlled factories. But it is important to notice that this plan has been approved by four unions on five. Only Fiom, the left-wing union rejected the agreement. These changes in the Fiat factories, symbol of the Italian industry, could push the Italian economy towards the implementation of other needed liberal reforms.