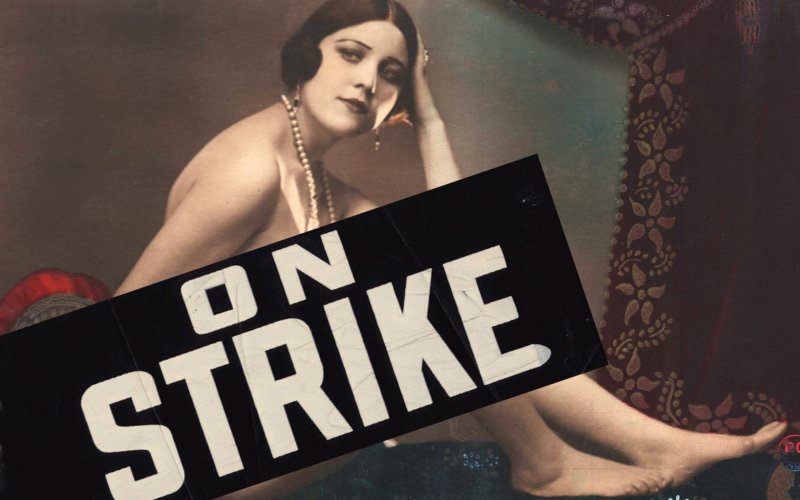 Summer temperatures bring new wave of strikes to France (not that they’re seasonal…). Two concurrent current strikes involve nudity. Fiscally, though, they have very different implications. It does not depend on what you do with your clothes, it depends on who is your employer.

What to do with your clothes when you strike

Suppose you are in France and you are unhappy with something. As the rest of the World knows, the stereotypical reaction to such situation is to strike. 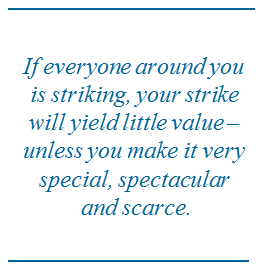 The Law of Supply, however, is very cruel. It applies even in France. “That which exists in abundance relative to demand tends to have low value.” It might not necessarily apply to French agriculture where low prices are no hindrance to increasing production (see: subsidies), but it does apply to strikes. Demand for strikes is low among customers, and their supply in France seems unlimited. If everyone around you is striking, your strike will yield little value – unless you make it very special, spectacular and scarce.

It no longer suffices, for example, to engage in the tradition of using farm animals to block Parisian streets. In these enlightened times you have to take your sheep to the Louvre museum, presumably to test how the Mona Lisa Staring Eyes Theory will hold up vis-à-vis a homogenous herd (apparently, it works because it doesn’t, according to scientists). Even if you are publicly spirited and want to help all your fellow citizens and not just yourself, you still have to dump a mountain of dung outside the Parliament. (And that’s all just from this year’s first quarter…)

However, there is no chaos in French striking strategies; they are governed by an inescapable logic. Here is a simple cut-out IREF guide for anyone contemplating striking in a striking way in France this summer:

Both strikes are of course about benefits that French workers are entitled to according to the very generous French labour market laws. IREF has recently reported – in French – on these benefits in the regulated private sector, in the public sector and on the union power in France in general.

And yet, however similar the two strikes may appear, there is a crucial difference between them. Only one of them involves state employees. And that matters.

On the one hand there is the strike of (clothed) performers and (hopefully clothed) technicians at summer festivals (who strike by going nude). That is a “simple” dispute over pensions and other benefits, all part of French fiscal policy. These workers are private sector employees, but due to a “special nature” of their profession they managed to lobby through in 1936 a special rule which classes them as “Intermittents du spectacle”. As such they get even higher benefits and pensions than other French private sector workers.

Now as part of austerity programmes the government is trying to “normalise” their status. They will not be made worse off than other workers, they will still get the lavish treatment of the French labour market.

Such standardisation is reasonable. While the intermittents pay in social security about €230m a year, five times as much is paid out to them. (That’s according to the official state auditors. The intermittents themselves claim that they only claim modest €320m, not the one and a quarter billion.)

This strike cannot easily be justified. The government in this case is doing two sensible things at once:
• it is reducing the fiscal burden that needs to be financed through taxes on current or future generations, and
• it is (slowly) getting rid of arbitrary privileges of special groups on the labour market.

These privileges have traditionally been justified by the alleged greater danger of unemployment faced by the intermittents. But that may only be true if other labour groups enjoy special shielding from unemployment.

Having equalised the intermittents’ benefits, the French government should now also equalise their exposure to the threat of unemployment by removing the arbitrary protection from other labour sectors. Unemployment is a terrible thing, but its power to send a vital signal to everyone about what works and what doesn’t is irreplaceable.

The situation is quite different in the second case, where nude models strike for their benefits. The crucial difference is not in nudity but in the fact that they are (for better or worse) public sector workers.

These models (male and female) are actually employed by the Ministry of Culture and/or by local governments to model for nude painting in the country’s art schools. They are paid near-minimum wages, €15/hour. They argue that this is not adequate since their job is both artistically and physically demanding (they have to hold a pose for up to three hours at a time, 9 hours per day).

That may be so, but there are also other “demanding” low-wage professions, such as waiters. Those have come up with a market solution to the low wage problem: through tips they can supplement their low wages. And the nude models in fact had traditionally come up with the same solution: le cornet, a paper cone would be passed round the studio to collect a little extra from the painters. Simple!

But now the government banned the use of le cornet. And that led to the current problems. Strangely, the government used fiscal arguments to justify the ban on the tip cone:
“We can’t let people collect money that’s not taxed while working in a state building,” the Guardian newspaper was told. 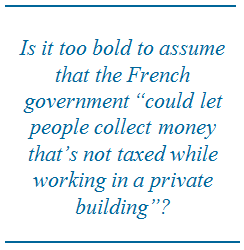 Of course, that does not make it clear what the government saw as the real problem – that some money went untaxed or that it happened in a state building. Is it too bold to assume that the French government “could let people collect money that’s not taxed while working in a private building”?

We hope so. But if they don’t, they should not hold wages for any state employees artificially low. The success of the tipping paper jar suggests that the nude models were receiving less than the market value for their work and acted to correct this situation in the same way as another profession does, quite legally.

After all, since the models are now paid less than their market rate, the government will have to replace le cornet with increased wages to their employees – and that will be fiscally costly! Instead of saving money the ban will end up costing the taxpayer more. (And the painters will lose their power to signal which models are in artistic demand.)

In most countries, income received through tips is taxable, just like any other income. If it works for waiters (and hairdressers, taxi drivers and others), why should it not work for nude models?

When the state treats some of its citizens quite differently than others, it is not living up to its creed Liberté, égalité, fraternité.
When such mistreated citizens are the state’s employees, it is an outright discrimination. Nudism is racism by another name.