Copyright 2022 IREF Europe
Home » Next tax on the menu in the EU: tax on meat.
Online Articles 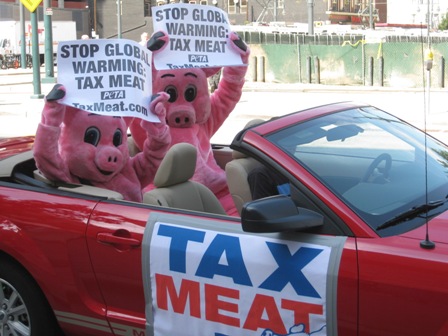 The imagination of EU governments to come up with new kinds of tax is apparently inexhaustible. Tax on meat is now being prepared, as an answer to alleged “problems” with meat production and consumption. But taxes are generally bad solutions to “problems”, especially when those problems are created by other government activities.

The EU now has now a whole menu of food taxes. Salty, fatty and sugary foods are newly subject to extra taxation in Romania (2010) or Hungary (2011). New soft drink taxes have been introduced in France (2012) or Finland (2011). Only this week, proving famous British pragmatism, the Prime Minister David Cameron indicated that it did not matter which ingested substance made you fat, you can have your benefits cut as punishment.

And now there is a new food tax fad. A Swedish minister has launched a working group tasked with designing an optimum tax on meat. The proposal is cloaked with a traditional patronising mixture of “meat is bad for you, and bad for the environment”. However, the meat food tax can also be a form targeted subsidy for the energy sector.

There are two basic environmental impacts of meat production in the EU.

1) Gas emissions. Beef (cattle) are especially bad on account of methane (emitted from either end, as a result of rumination), gas 20 times more powerful in trapping heat on Earth than CO2. Further greenhouse-gas emissions come from both intensive rearing of cattle through feed production as well as from extensive, mainly through deforestation. Worldwide, it can account for up to 18% of greenhouse-gas emissions.

2) Resource waste. Meat – and especially beef – is the least efficient way of producing protein. It needs
a) the most feed per pound of protein,
b) largest acreage, and
c) by far the most water.

Neither impact would pose a problem – if all resources used in the production were properly priced on the market. Then meat price would cover all its production costs and there would be no reason to impose a “corrective” tax similar to the carbon tax: there would be nothing a government could claim to try to “correct”.

The truth is, all costs are not covered. However, in many cases it is actually EU governments who are at fault.

We can take the above impacts one by one:

1) Gas emissions: The EU has created an emissions trading scheme designed to reduce pollution and emitting farmers were supposed to participate, eventually. However, the European Commission distributed way too many “free” pollution permits, so that the scheme is de facto useless..

2a) Cost of feed: Meat – and especially beef – have always been the most subsidized farm products under the Common Agricultural Policy (CAP) of the EU. Until the 1990s subsidies went directly for cows and milk. After popular opposition against “milk lakes” it then relabeled the money as subsidy “for pastures and grassland”, ostensibly to encourage “biodiversity”. But that is just a payment for cows by another name. Overall, the EU has one of the highest subsidies to livestock in the world, second only to former Soviet Union, China and Indonesia.

Furthermore, it is simply not true that EU has converted all outright livestock subsidies into implicit feed subsidies. Most countries continue to subsidize actual heads of cattle, under special provisions.

2b) Cost of land: agricultural land used for meat production has alternative uses, e.g. production of energy. Under normal circumstances, land would be converted to the use which fetches the highest price. However, this will not work when governments subsidize both agriculture and “alternative energy”.

2c) Cost of water: EU meat producers generally do not bear the full costs of the water they use. Governments subsidize meat by undertaking large irrigation projects, and often let farmers use both ground and underground water essentially for free.

EU governments therefore make European meat cheaper, which encourages its consumption. In such situation, it makes little sense to tax it to decrease consumption. Instead of employing an army of administrators who make something simultaneously cheaper and more expensive, it would be better not to subsidize meat in the first place. If governments are worried about income levels of farmers, they should do so by an incomes policy, not meat production policy.

This is echoed in the “Declaration by a Group of Leading Agricultural Economists”:

“Although in certain member states farm household incomes are below the average income in the non-agricultural sector, …agricultural subsidies are not an effective tool for social policy. Instead, public aid should be targeted at households with low income and wealth regardless of the sector they work in.“

The Swedish proposition for a meat tax may have, however, yet another motive, and an agenda. The proposing minister sees it as a way of making Sweden a “market leader” in innovation in bioenergy, as Swedish pastures are converted into growing biofuels, and conversion of pastures are seen as the way.

For this to work even theoretically, one would have to assume that increased tax will lower the demand for Swedish-produced meat. That assumption will not fully materialize, for two main reasons:

• Demand for meat is generally inelastic in rich countries (such as Sweden): People are sufficiently rich not to worry about financing the next slice of meat. A meat tax would have to be very high to affect on Swedish demand.

• Swedish meat is not produced only for Swedish demand. Faced with an extra tax at home, many Swedish meat producers will just export more to the (as yet untaxed) EU market, leaving Swedish land use largely unchanged.

Practically, however, the proposed tax policy lacks any sensible justification. Governments are pretty bad at picking “winning” or “future” technologies. But even if, against better judgment, the Swedish government wants to have a go, what is it about meat-eaters that it should be they who pay for it?