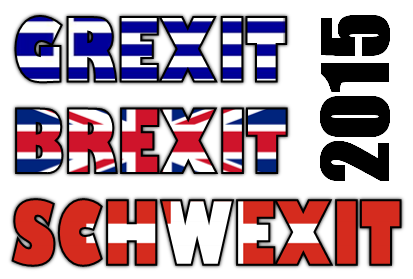 Switzerland may be known for low taxes, but that does not prevent it from redistributing them; richer regions subsidise the poorer ones. Now at least one paying canton is starting to protest against the arrangement. There really is a big difference between how much taxpayers in different cantons pay for (or receive from) others. But somewhat surprisingly, there is hardly any “freeriding”: subsidised cantons do not use the subsidy to lower their own tax revenues. “Race to the bottom” that most EU politicians like to fear is therefore little to be feared.

First was Grexit. Then Brexit has been the talk of the town. Now it’s Schwexit’s turn.

The one thing they all share is the idea of leaving a system of mutual governmental support. Though Grexit is technically about leaving the currency rather than the Union, last several years prove that the Euro itself is just as much dependent on cross-subsidies as the EU itself.

Schwexit, by contrast, is the vexing question whether the Swiss canton of Schwyz (one of the original three founding cantons from the year 1291, the one with apparently the catchiest name) should leave the inter-cantonal conference on financial equalization: it feels that the costs of membership are starting to outweigh the benefits. In mid-November, the Schwyz government voted against Schwexit. But the pressures continue and there are at least 5 other cantons interested in adding their prefix to the exit word-family. We explain why.

Economics tells us that fiscal transfers (subsidies between member governments) are the only way to keep a single currency (i.e. fixed exchange rates) functional if labour and capital are not freely moving between individual countries and regions to arbitrage market differences. (In the EU, these mobilities are still far from perfect, , and language barriers aren’t the only problem. Government labour market regulations make it difficult for a French company to replace its French worker with a Spanish one.)

Switzerland, like the EU, also has one currency, great regional differences and labour that isn’t completely mobile (on account of language and cultural preferences, and quite highly developed regional specialization). So it’s no wonder that the Swiss also have their own system of transfers which follow predetermined rules. The current set of rules was framed in 2008 and is called NFA (New Financial Equalisation). Its calculations of transfers for 2016 are the immediate reason for the Schwexit card being played.

The fund to be redistributed among cantons is financed partly by the federal government and partly by cantons themselves. The formula which calculates the sums each canton will receive or pay considers geographic, topographic and sociodemographic differences, as well as “ability to raise own tax revenue” and “infrastructure demands”. As can probably be expected, the sets of cantons who are net contributing to the fund – and sets who are net receiving – have been fairly constant across the years. In 2015 there are 19 receiving cantons and only 7 paying. Next year there will only be 6…

The following chart of cantonal payments (+) and receipts (-) demonstrates the size of the imbalance. The receivers (in negative millions of CHF) far outweigh the payers not just in number but also in volume – the difference, of course, being the federal contribution to the fund. In reality though, the payers pay more than shown – they are also the biggest tax contributors to the general federal budget from which the federal contribution is drawn. 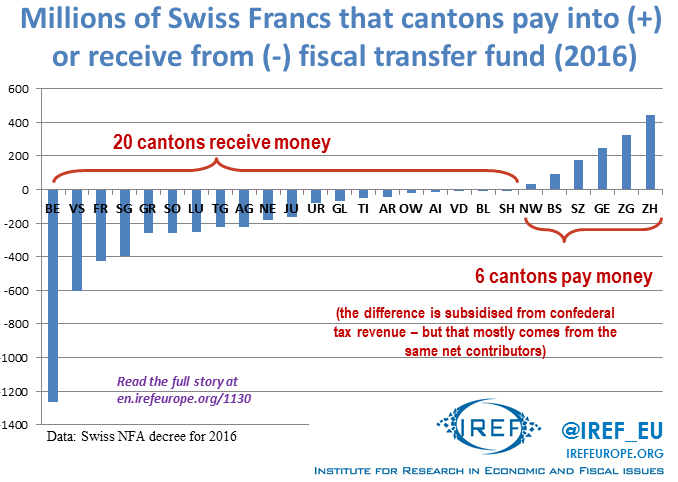 There is only one francophone canton (Geneva) in the paying group. The biggest recipient (Bern) and the biggest payer (Zurich) are also the largest cantons. If we recalculate the contributions per head, we get the following picture, both in chart and a map: 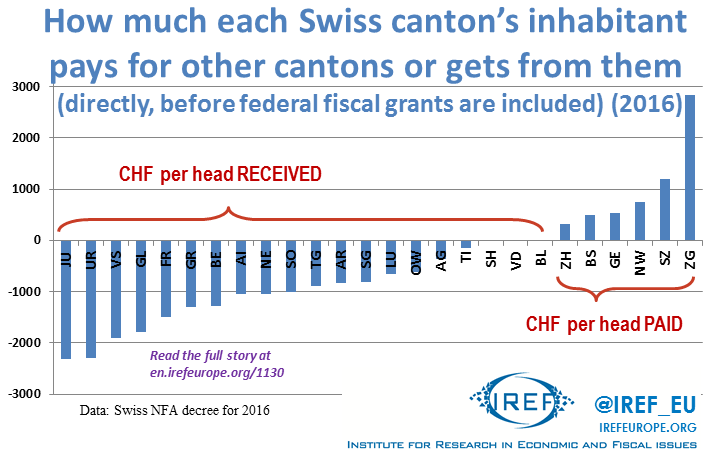 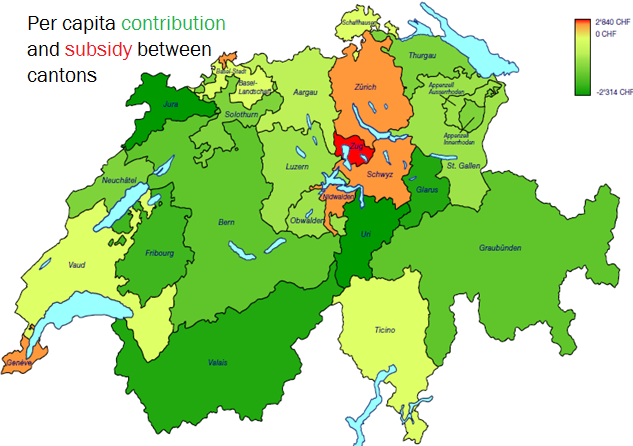 Canton Zug is by far the largest contributor per head while the francophone Jura, Valais and Fribourg are among the largest recipients. Interestingly, German-speaking cantons of Glarus and Uri are also among top recipients even though they are both just next to all the main payers. They are certainly more mountainous than Zurich or Zug but not that much more so than Schwyz or Nidwalden. This suggests that economic policies of cantonal governments also play a role, not just “natural” (or “cultural”) disadvantages.

That may be interesting for the Swiss, to see who subsidises whom, but what general lessons can be learnt?

In spite of redistribution, fiscal federalism leads to no free-riding

Switzerland is a textbook-perfect example of a reasonably well functioning fiscal federalism. Cantons (and local communities) compete with each other over the tax/spending mix they offer to their inhabitants. These regional differences are large both in tax rate as well as in volume (cantons collect 1/3 of total tax revenue, 1/3 is kept by the municipality and the federal government has to make do with only the remaining 1/3).

Some people, in spite of evidence, still argue that fiscal federalism and fiscal competition will lead to a “race to the bottom”, that governments will undercut each other’s tax rate until it is “unsustainably” low (whatever that means). Any system of transfers is then believed to only speed up the process, since the tax undercutting states would rely on the fund transfers to provide for spending. They would free-ride, it is argued, on the “Germanies, Frances and Swedens of this world” who have done the allegedly “honourable thing” and refrained from mutual tax-competition.

If that were the case, we would expect there to be a correlation between large transfer receipts and low tax rates. However, Switzerland shows the opposite. All the orange (paying) cantons are (perhaps with the exception of Geneva) well known for their low tax rates. They are net contributors to the system because these lower tax rates have attracted businesses (and individuals) to be economically active there (cantons make it difficult to fake actual residency).

The NFA formula does, however, retain one significant motivational shortcoming and the Intercantonal conference Schwyz was thinking of leaving is supposed to debate removing it. If the government of a receiving canton uses good economic policy to reduce the “disadvantaged” status, it does not mean that the payers will have to pay less, according to current rules. Only that the non-improved cantons will receive even more. This needs to change, and it is not technically difficult. Future system must provide a way for the overall amount of transfers to go down if disadvantaged cantons get better. 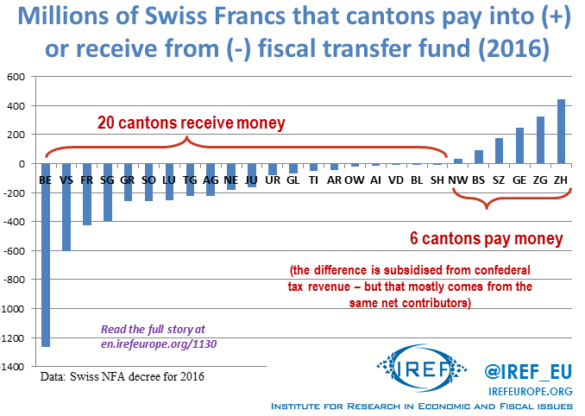 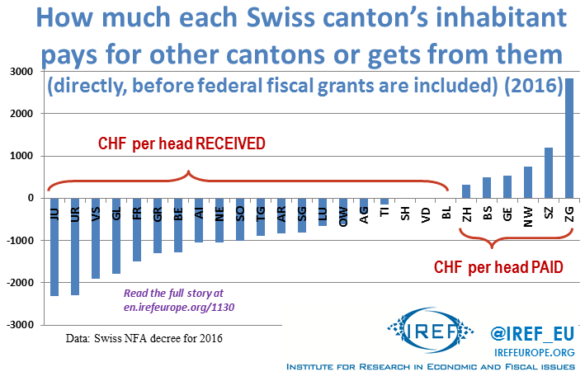 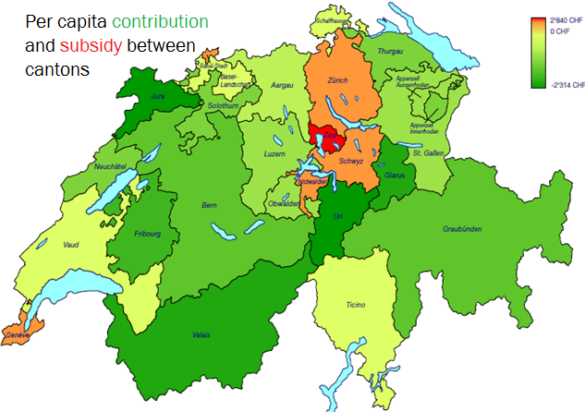