Nobelist plays poker. For a pound. 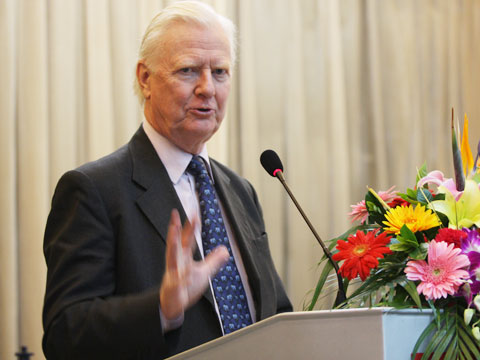 Scotland’s coming referendum is offering the country “independence”. Politicians cannot agree about what exactly it would mean, especially what currency the new state would have. Now an economics Nobelist has added his voice to the debate. At face value the question of adopting another country’s currency is very simple, but closer scrutiny reveals deep fiscal connotations which complicate things. IREF disentangles the debate.

Sir James Mirrlees is a Memorial Nobel Prize winning economist who has made his name in devising an optimal income tax: a system which would raise the maximum amount of tax revenue for the smallest overall cost associated with the system (in terms of people’s welfare).

However “handy” it may seem for the practical design of government policy, Sir James has generally adhered to the division of labour that exists (for better or worse) in academic economics: He wrote the academic papers and devised the systems, leaving it to others to “lobby” real world politicians to adopt some of its features. Recently he did, however, get his hands “dirty” in common politics when he added his voice for an independent Scotland for the forthcoming referendum.

The whole referendum saga is interesting in the amount of uncertainty that surrounds the independence option. Neither the referendum question itself, nor the official Westminster government itself are in any way clear as to what exactly independence would mean. (That was presumably intentionally so, since a “No” to one kind of independence would immediately roll over to new campaign for a slightly differently defined independence…)

Whilst the pro-independence Scots are, for the most part, content with sharing the central government’s accumulated fiscal debt on a per-capita basis, a big row developed over the question whether an independent Scotland would “be allowed to” keep the pound. The “Better together” campaign said no, Alex Salmond, Scotland’s First Minister and trailblazer for independence said yes. Arguments flared, until Sir James stepped in at the end of August and said that Scots would be within their right to refuse to share central government’s debt if the central government does not share the currency with an independent Scotland.

Before investigating the Mirrleesian idea of a debt/currency accounting system, let us clarify the misconception about the Pound Sterling in an independent Scotland.

Can anyone use the pound?

The Pound Sterling is a freely convertible currency. As such, any state can adopt it as a currency. End of story.

Those who have travelled in Scotland will know that there already are Scottish versions of the British pound in circulation, officially drawn by several Scottish banks. But for all intents and purposes these are just “Scottish pictures” on the banknotes, to make a souvenir for the tourist (which brings some profit to the central bank) and to give headache to corner-shop owners in the rest of the UK as you try to pay with these souvenirs. (They will generally accept them.)

The point is that it is the (confusingly named) Bank of England which determines the money supply of the fiat money for the whole of the UK. In determining the “optimal” money supply (it can effectively print any amount), it looks to the economic conditions within the British Isles, sans Ireland (since the 1920s). The only thing that would change post-independence is that it would start only considering economic conditions within the British Isles sans Ireland and Scotland. If the Scots are OK with it, there is little that the Westminster government, or the Bank of England, could do to prevent them from using the Pound.

In fact, many countries – generally those who have found it difficult to maintain credible currency – have given up their own currencies and effectively adopted another currency. Montenegro (of former Yugoslavia) adopted the Euro pretty much right since their independence. Argentina and some other Latin American countries have effectively “dollarized” at certain times, keeping the local currency pictures but fixing the convertible currency’s exchange rate to the dollar. Liechtenstein also used this strategy. Having freed itself from Austria after the Great War, it saw that the French-speaking Swiss cantons were blocking the addition of a new (German-speaking) canton of Vorarlberg (which voted 80% for breaking away from Austria and joining Switzerland), so it went for a safer association through a “monetary and customs union” with Switzerland. (But failing that it could have also adopted the Swiss Franc unilaterally.)

Funnily enough, a (sort of) independent Scotland did use the Pound Sterling in the past. Nay, for 11 years it even issued the currency! (It was OK, it was backed up by gold..) The practice started in 1696, while the Scottish and English parliaments only merged with the Act of Union of 1707!

It’s all about the denomination of taxes… Or is it?

Adopting another country’s currency (unilaterally) is easy but does involve fiscal policy: all that essentially needs to happen is for the government to acquiesce to accepting tax payments in that currency. A sensible government will want their taxes in a convertible currency that keeps its value, and sensible people will not generally find it in their interest to use another when exchanging among themselves.

Unless, of course, the government would have already signed treaties promising to adopt another (perhaps less sensible) currency. Then the government would have a problem. But that is precisely the situation that Scotland will find itself in if it has to reapply to join the EU. Nobody knows whether in fact it will have to. Scotland clearly wants to be a member (perhaps also hoping for greater EU subsidies on account of its lesser economic prowess than the UK). But no two lawyers can agree whether Scotland’s membership would lapse at the moment of independence, or whether it could carry its membership over.

Scotland surely hopes for the latter, since a re-application would likely be vetoed by the Spanish government fearing a precedent for its own regions. But re-application would also mean an obligation to adopt the Euro “as soon as economic conditions allow”. “Old entrants” (like UK or Sweden) are under no such obligation, but starting with the “Eastern enlargement”, all new members of the club are contractually pre-committed to adopt the Euro. So Scotland will be only allowed to “keep the pound” if it can also “keep the old EU membership card”.

Sir James knows all this. So why is he suggesting that Scotland won’t share debt if UK won’t share the pound? As he himself admits, it’s a bargaining chip. Technically, there is probably very little that the UK government can do to force the Scottish government to assume a share of its debt. It was the UK government that signed the I.O.U., and it will continue to be liable for repayment. Of course it is nigh unthinkable that in the land of birth of “fair play” the Scots would not take over their share in the end, but they want to get as much as possible in return, while still portraying the play as “fair”.

But what more can they get if they are already, as we have argued, free to adopt the pound unilaterally? Well, they could get the pound “with a licence”. They could make sure that the Bank of England (upon Westminster government’s instruction) could bear in mind also (independent) Scotland’s situation when setting the sterling monetary policy.

And above all they probably want to continue to enjoy that other service that central banks traditionally provide: not just the currency, but also being the “lender of last resort” to the private banking system, providing necessary liquidity. Technically, not even the healthiest of banks could survive “run on the bank”, perhaps malevolently initiated by a rumour spread by a competitor. Countries that use someone’s currency are not, of course, automatically afforded this “extra” benefit by the currency issuer. . But they don’t need to be, if they are clever about it. A recent briefing suggests that some reforms to the financial oversight system would allow for a pretty safe unilateral adoption of the Sterling without formal welcome from the English side.

We have seen that Scottish banks were not immune from the financial turmoil in recent years (partly precisely because they felt overly secure). At the same time, however, we have also seen that the “lender of last resort” was usually not the Bank of England but – the government.

Who knows what the future holds as to redefining the relative roles of central banks and governments, the respective monetary and fiscal policy makers, vis-à-vis insuring financial risks; the jury is still out.

Until (if ever) we know, UK government and its fiscal stance will continue to be a party also to otherwise purely monetary matters of a potentially new country. That’s why we will see this political brinkmanship to the last minute of the referendum. And probably beyond, whatever the outcome.

5 ways of responding to financial crisis