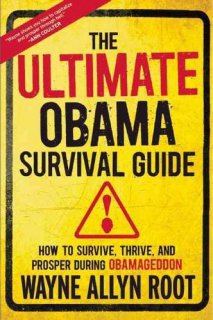 Ultimately, how to resist the Obamamania that is ruining the United States?

It is a true survival guide. Like the one distributed to scouts. With no less than 51 recommendations to deal with Obama’s policies. The author, a former reporter for CNBC, a member of the Libertarian Party, an analyst on Fox News channel, reviews – over 450 pages – all of America’s problems today: from economic problems to the restrictions on individual freedoms.

He started first with a figure. Obama promised to cut the deficit in half during his first term. On the contrary, he increased it by $4 trillion. The president promised to lower health deductions thanks to the Obamacare: but they increased by 60 % on average. Despite the economic recovery, the labor force continues to decline. And besides, the current recovery is less important than those of 1982-1983 or 2002-2003. By claiming higher taxes on the rich, it is the middle class and businesses which were hit. 77 % of Americans have actually experienced a tax increase. And 20% of the richest pay 94% of total taxes (the richest 1% pay 39% of the total!).

Detroit is showing the perfect example of Obama’s disaster. For decades Democrats ruled the city: it is now bankrupt (more than a third of the buildings are empty) and it is also the most dangerous in America.

So, how to survive? By trying to create his own company, without waiting for help from the Government, by defending individual freedoms and by being an activist in civil society. That is where still lie America’s strength. Gold should be bought and fossil fuels should be invested in. Also choose to live in the most welcoming states: Texas can be found among those which resist to the Obamania. Between 2000 and 2010, more than 500,000 Americans have left California to settle in Texas. Eight of the fifteen most prosperous cities in the United States are in Texas where more jobs were created in the last 10 years than in all other states combined. This led Governor Rick Perry State to try to ignore all measures coming from Washington: they are opposed by Texans since they penalize small and medium enterprises.

Finally, when a member of the Government offers assistance, remind him about Reagan: “The nine most terrifying words in the English vocabulary are: “I’m from the Government and I’m here to help !”