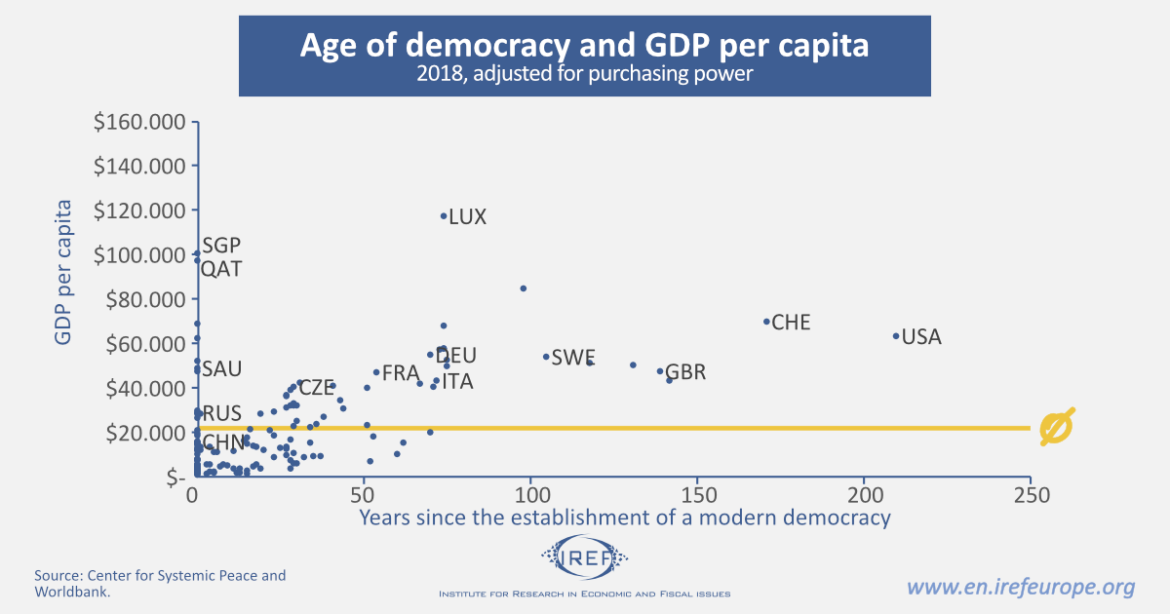 After the fall of the Iron Curtain, comparing political and economic system appeared to have become a futile exercise. Western democracies had outperformed the socialist-communist social systems. Yet, thirty years later we see that no “End of History” has occurred, and that the fundamental question of economic systems is back. Despite being an authoritarian one-party state, China has become a global economic and military superpower. During the COVID-19 pandemic, the rigorous action taken by the Chinese government is sometimes praised as effective and superior to that of the West.

Nonetheless, the data on countries’ political systems and the average income of these countries’ populations are eloquent. Data covering the past 200 years indicates that prosperity is only achieved in democracies, especially in the long run. There is not a single old low-income democracy. In this regard, the polity5 dataset by the Center for Systemic Peace includes years up until 2018, and considers for how long a country has been a democracy. A country is counted as democratic if it scores at least a 6 on a scale from -10 to +10. Germany, for instance, reaches 70 democratic years (1949-2018), Saudi Arabia remains at 0.

Data on GDP per capita in 2018, adjusted for purchasing power, is provided by the World Bank. The following graphic includes countries for which both data – democratic history and GDP – are available. 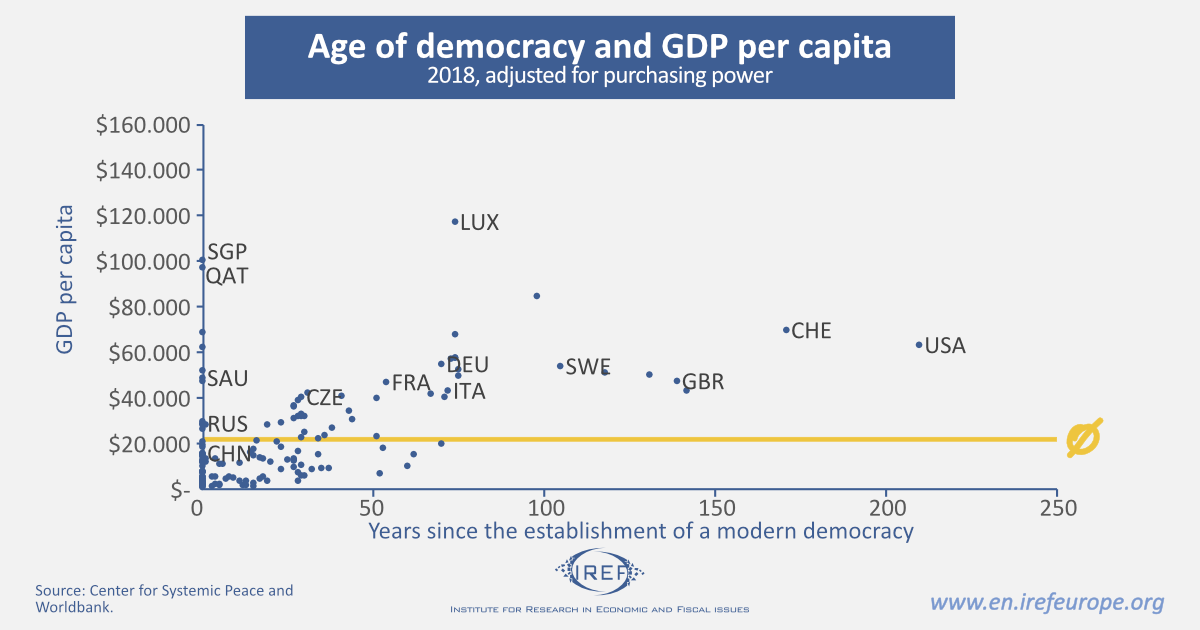 The graphic shows a positive correlation between economic prosperity and the number of continuous years of democratic political structures. Long-established democracies are all characterised by relatively high income per capita. By contrast, income levels in autocratic countries (with 0 years of democracy) varies significantly. Many present very low income levels. Yet, there are others with very high average income. The variation is largely related to the influence of natural resources such as oil.

If one drops from the sample those 20 countries with the highest annual oil production, the average incomes of autocracies falls significantly. The only notable exception is Singapore, a relatively young (55 years) city state and financial centre where GDP per capita is about 100,000 USD. 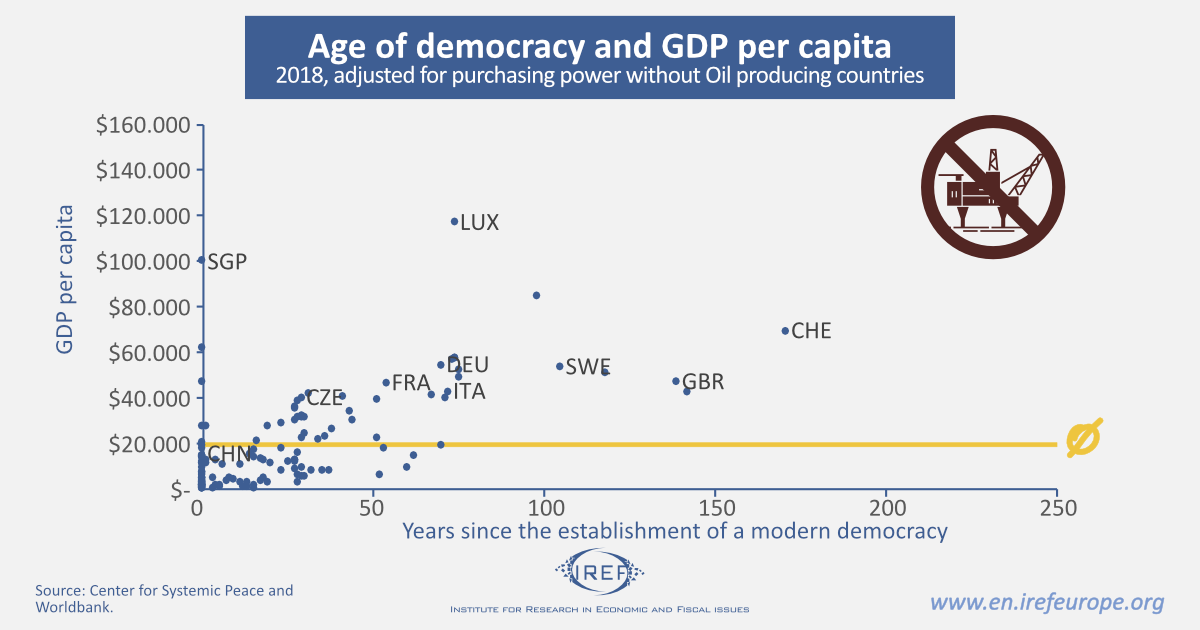 The significant positive relation between wealth and democracy is in fact a correlation. However, there are good reasons to suppose that a causal connection exists. While older empirical work did not find conclusive evidence for democracy having a causal effect on production levels, more recent publications do find such indications. Economists Torsten Persson and Guido Tabellini show, for instance, that support for democracy and economic growth are mutually reinforcing. Daron Acemoglu also hints at a positive causal effect of democratic structures on economic growth. Acemoglu and his colleagues trace this back to higher investment, better health care systems, and higher levels of education.

It hasn’t taken a long time for China to catch up, become a global superpower and develop close connections with numerous other economies by means of joint infrastructural projects. This strategy is now a challenge for the highly polarised EU countries and their currently not very reliable partner, the US. Moreover, the Chinese leadership has been able to take drastic measures to fight the COVID-19 pandemic, which seem to have been more effective than those taken in Europe or the United States.

Yet, trust in democratic systems remains justified. In the long run, democratic structures warrant prosperity and freedom. Democracy does lead to economic growth and social accomplishments like higher education levels and better health care, not to mention the importance of political participation. 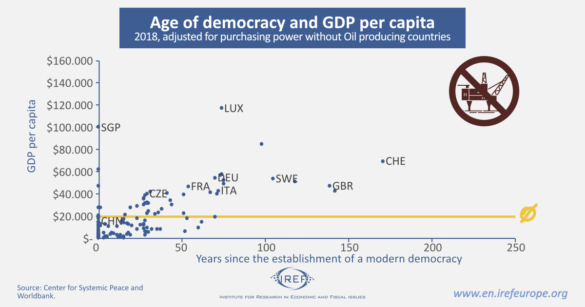 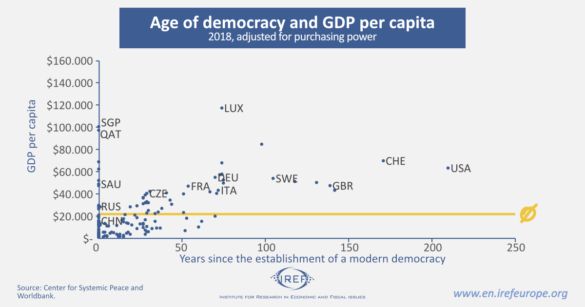