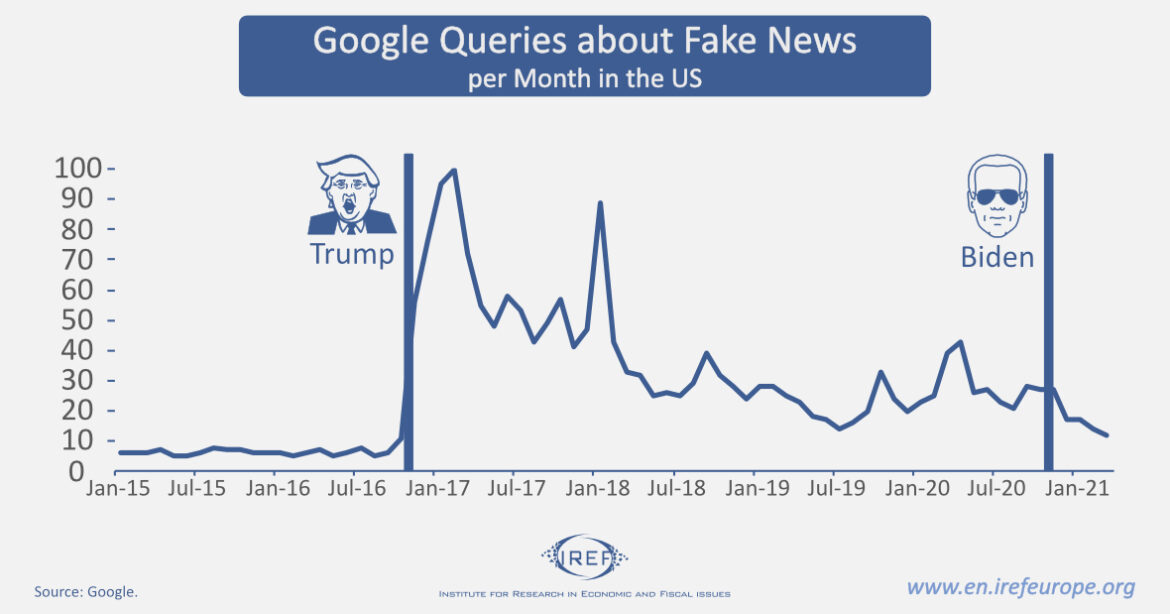 For some years, they have been the undisputed queens of political talk shows, the master key used by most commentators to explain the whatever. There was no election in which they did not make their triumphal appearance: The «leave» won at Brexit? Fault of fake news! Trump becomes president? The same! True, fake news, a catch-all term referring to intentionally fabricated information characterized by politically charged content, suffered a first backlash in conjunction with the 2019 European elections, where the expected populist tide ultimately failed to come about. But with Joe Biden at the White House the miracle seems to have materialised: all of a sudden, fake news and their thaumaturgical role in influencing the vote vanished (or almost did).

Some data in this respect. In the United States, Google searching about the “fake news” term decreased considerably since November 2020, and in March 2021 it reached the lowest level since October 2016 (Google trend is indexed to 100, where 100 is the maximum search interest for the time and location selected). It seems, therefore, that the American public is no longer much interested in such topic. 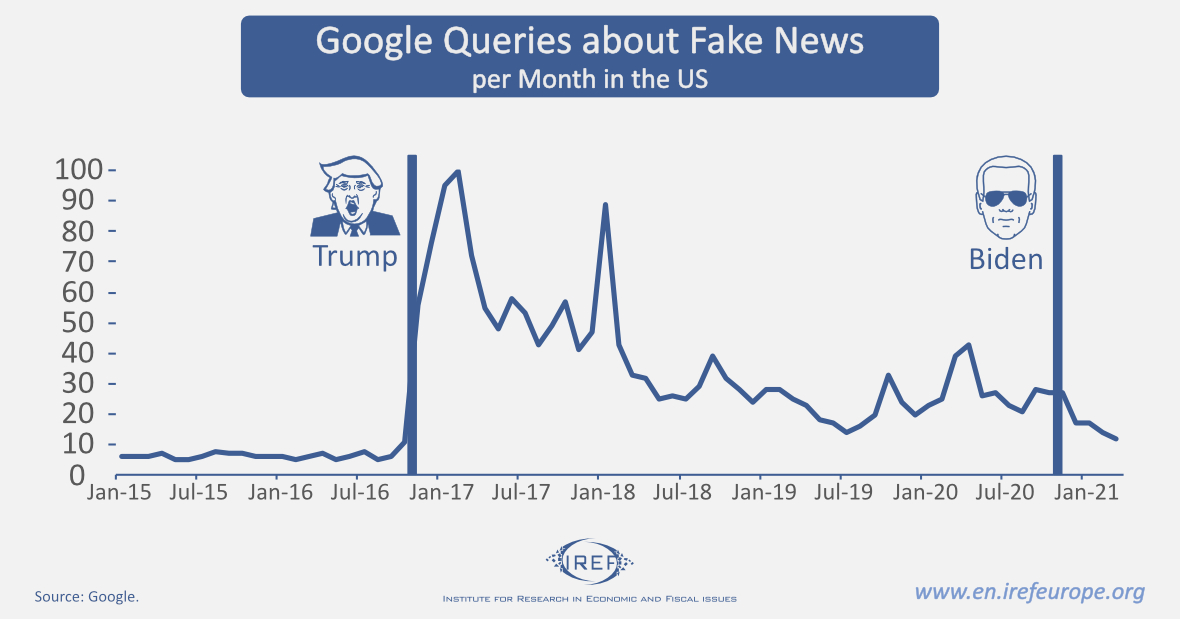 A query on Google Scholar shows similar results also with respect to the scientific articles having in their title the “fake news” term. If we extrapolate for the entire 2021 the data available for the first four months of this year, the expected decrease in the number of papers dealing with fake news would be 31% less than in 2020 (1,500 articles vs. 2,180). The drop is notable (-22%) even if one selects “misinformation” and/or “disinformation”, rather than “fake news”. The same applies to “post-truth” (-42%), the 2016 Oxford Dictionaries’ Word of the Year.

This trend is also interesting from a sociological point of view. In the scientific literature, people have often wondered whether fake news do affect attitudes and electoral results. Most statistics regarding the presence of fake news on Facebook and Twitter, however, should be taken with care. First, they neglect that these social media may reach a relatively small number of voters. Second, and most important, these statistics fail to take into account the existence of more typical mainstream news. For example, during the 2016 US presidential elections, it is estimated the 3 million people who shared various types of fake news were nearly 5 million times on Twitter. Although these are large numbers, fake news represented only about 1% of the intake of political news of a generic user of Twitter. Moreover, and most importantly, the circulation of false news was highly concentrated: 80% of the false news hit only 1% of the users. In other words, the results suggest that fake news have been a niche source of interest characterizing a small subset of voters. In particular, fake news were above all read by those who already have a very clear idea on how to vote and consume fake news simply to confirm those very ideas, rather than to change them. This is nothing new: people tend to prefer congenial information: the well-known ‘selective exposure’ attitude. Political news are no exception. The outcome is similar when one moves from Twitter to Facebook.

In other words, the impact of fake news has been (and still is) limited by the same mechanism that helps such posts find traction and spread: the algorithms and filter bubbles ensure that people see and share political views with which they were already inclined to agree. Those most likely to interact with “Russian trolls” or consume fake news were (and still are) those the least likely to be influenced by them – because of their more entrenched political views.

Put differently, the fact that large numbers of people read plenty of fake news on the social media does not necessarily mean that such messages influence their attitudes. If anything, the messages just reinforce prior political beliefs. This is not surprising for those studying the socio-economic, contextual and programmatic factors that influence the voters’ choices and are unlikely to change rapidly when exposed to fake news. Yet, this lesson is often underestimated and sometimes forgotten.

A question therefore remains. Why do fake news and elections make headlines despite the lack of any strong empirical and theoretical evidence? The answer is that the same reasons that determine the success of the hoaxes also apply to fake news: they offer a simplistic explanation (a kind of straw-man concept) for a complex problem and lend themselves to be an effective propaganda tool. In this respect, all the empirical doubts are swept away by the need to find an easy and reassuring answer to complex problems. Why should one try hard to understand the underlying reasons behind the Americans’ choice to vote for Trump instead of Hillary Clinton? The fake news-narrative offers an easy answer, along with the image of poorly informed and easily manipulated voters. Conscience is calmed and scapegoats identified. In this respect, analysis based upon anecdotal evidence is more than enough. In the end, the problem dissolves when voters become more mature and finally figure out how to vote.

Of course, this does not imply that fake news are harmless. In fact, they can have negative effects that extend beyond the electoral outcomes. They can polarize citizens, undermine trust in the media and distort the content of public debate. But we need (more) evidence and data, not hype or speculation. 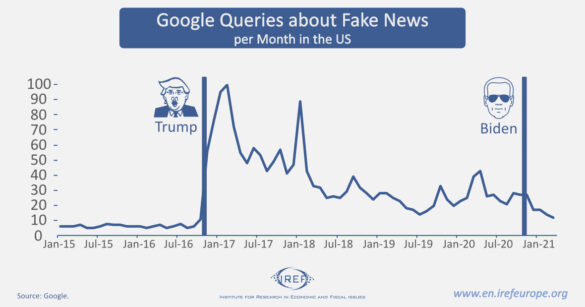