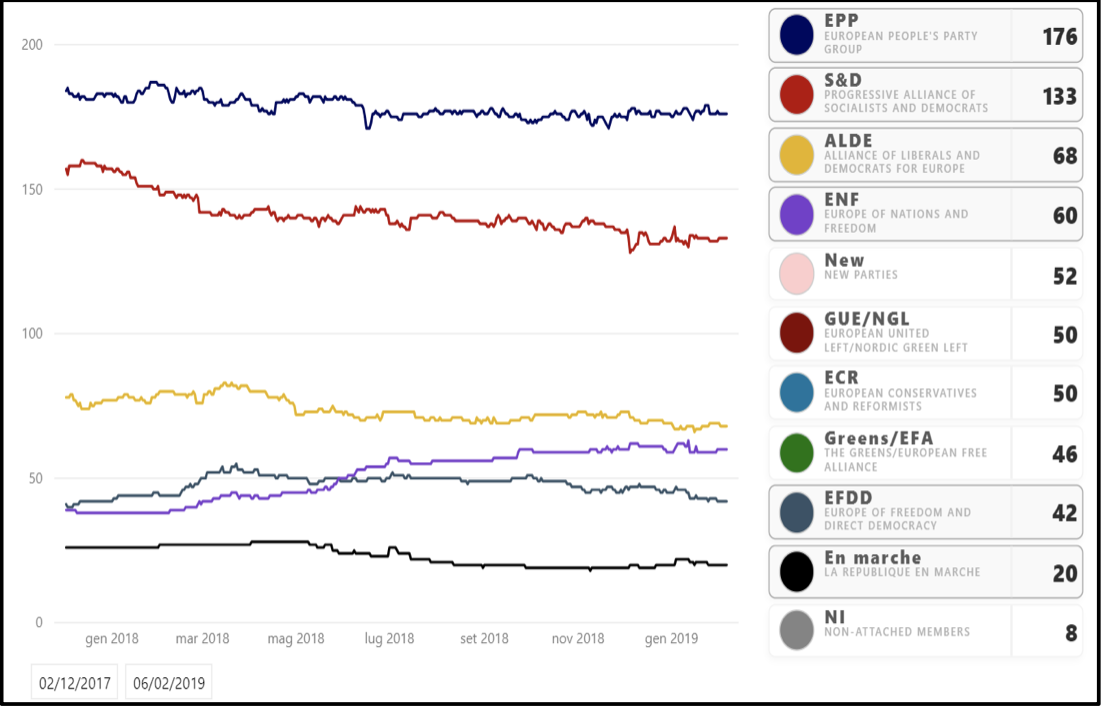 Paris has decided to recall its ambassador from Rome, further deepening one of the worst crises between the two neighbouring countries in recent European history. The dramatic (some say theatrical) move was motivated by the repeated verbal attacks that prominent Italian political leaders – Luigi Di Maio, the head of the 5-Star, anti-establishment party, and Matteo Salvini of the Lega – launched against President Macron (both are deputy prime ministers in the current Italian government).

Recent relations between the two countries have been characterized by increasing political tensions and many problems are on the table. In particular, they regard French foreign policy: the leaders of the present Italian coalition government blame Paris for the crisis related to migration flows from Northern Africa, allegedly originated by France’s 2011 action to oust Gaddafi.

Most Italians and French are presumably looking with discomfort at what at first sight appears as a minor dispute, and do not believe that anything dramatic is about to happen. Indeed, the European Parliamentary elections are coming, and both the 5-Star Movement and the Lega are looking for suitable alliances. Macron has also its own reasons to fuel tensions.

The struggle between Paris and Rome has many lessons to teach. In particular, it shows that the space of political competition is no longer confined to the traditional national borders. A larger political space has emerged, and what could be seen as a dispute between representatives from different countries is actually an internal clash in an enlarged context.

What Can We Expect From The Coming Elections?

The 5-Star Movement has not experienced an easy life in Europe until now. Moreover, as a consequence of Brexit, its best ally, Nigel Farage’s UKIP, might be off the stage. Hence, the Movement is now eager to build new alliances, given that one needs at least 25 MEPs to qualify as a parliamentary group. Being outside any group means no access to parliamentary funds. Recent surveys show that a consistent share of the French electorate (more than 10%) are willing to support a gilets jaunes (yellow vest) party. This is why the 5-Star Movement is trying to develop close links with the yellow-vest movement, regardless of the vibrant reactions of the French executive.

Instead, Salvini is working to build a European far-right bloc that would include Marine Le Pen’s Rassemblement National. This explains his aggressive stance against French President Macron.

There are good reasons that justify ongoing tensions in the next few months: Italian leaders need to gain visibility at the European level by promoting their populist agenda, whereas Macron wishes to act as a centrist counterweight. In fact, the current polls show that most centrist pro-European groups are going to lose, while anti-EU alliances are on the rise (fig. 1). 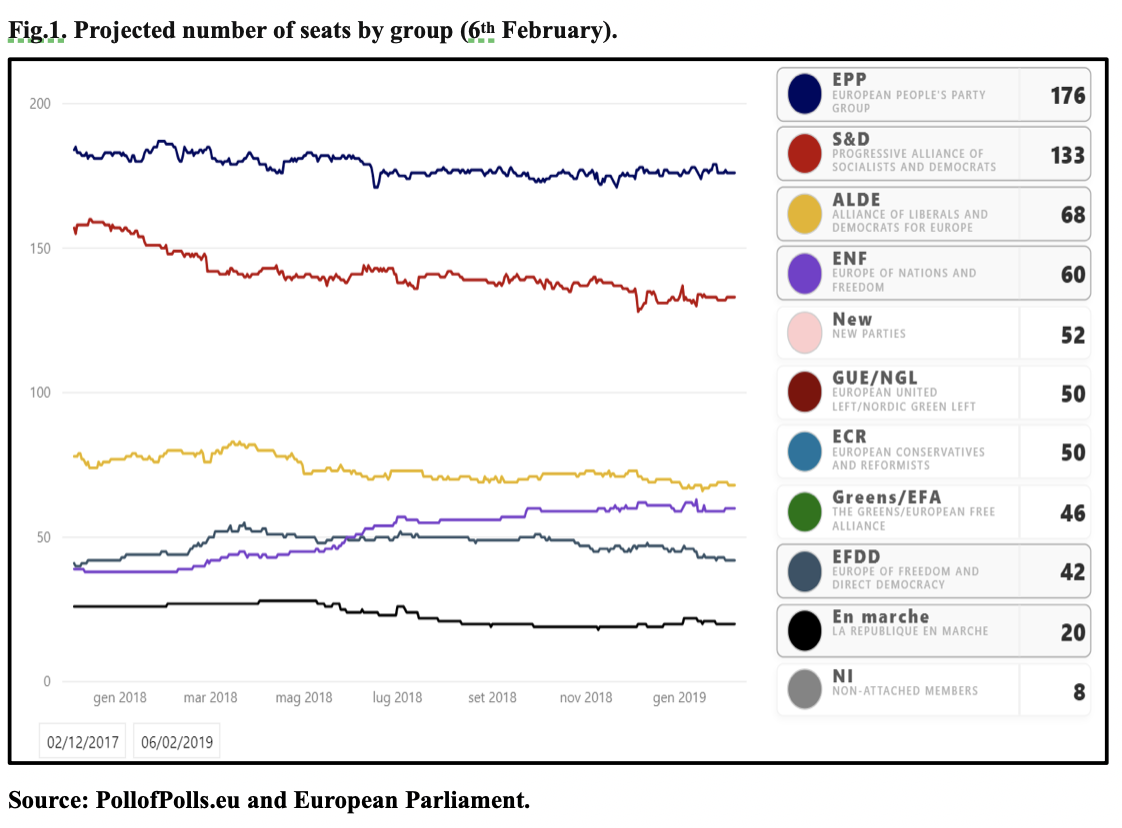 The European People’s party group (EPP) should remain the largest group in the European Parliament. Yet, it might suffer a 20% loss, from 216 seats to 176. The Socialists and Democrats could fare even worse, and drop from 189 to 133 seats (-29%). The liberal ALDE and its potential ally, French President Macron’s En Marche, have also been losing ground in the latest months. This loss might be due to Macron reluctance to join the alliance. Apparently, he does not like being labelled a liberal. The far-right Europe of Nations and Freedom party could gain most, and increase its share of seats from 4.8% to 8.0 %. Together with other groups, such as the EFDD and the ECR, euro-sceptics could reach 25% of seats in the next European Parliament.

Figure 2 reports the 2019 GDP growth rate forecasts for Europe. In brief, the bulk of Europe is about to experience a significant slowdown in economic activity. At the very bottom of the ranking lies Italy, with a 0.2% GDP growth rate, a forecast even less favorable than that released by the IMF in January, pointing to a 0.6% GDP growth rate. Germany, France and the UK are also expected to perform poorly. Political uncertainties are likely to be playing a role in the slowdown. France is being shaken by the yellow vest protests. The UK is dealing with Brexit. Germany is facing a deep political transition as Angela Merkel is about to leave the stage after so many years in power. Italy’s government seems only capable of charting rudderless courses.
Creating and feeding tensions against an external enemy – this is what Paris and Rome are currently doing – may distract voters from the economic slowdown. The upshot is that Europe will start facing its real problems only in June or later. 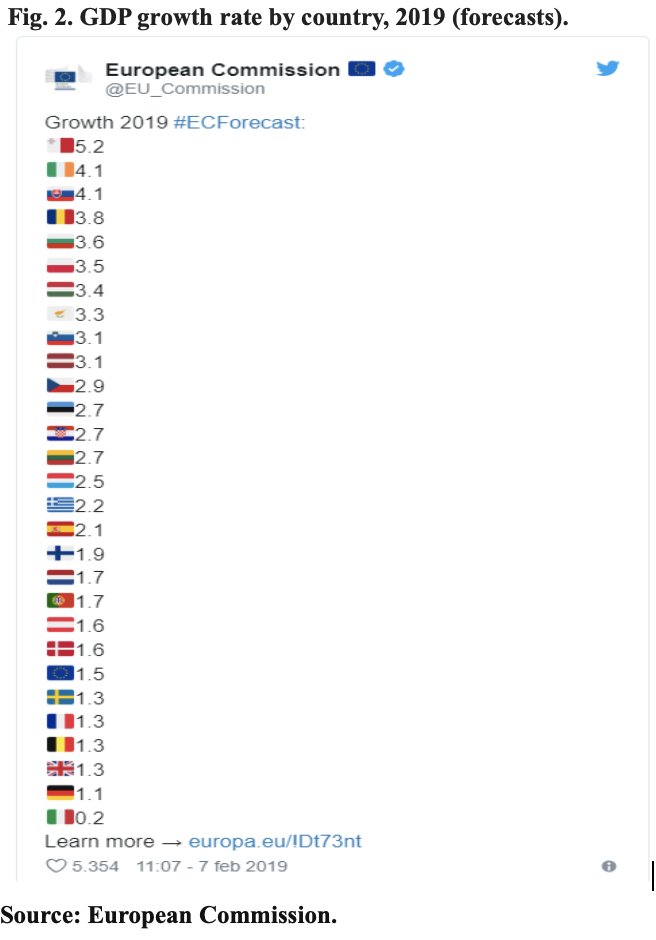 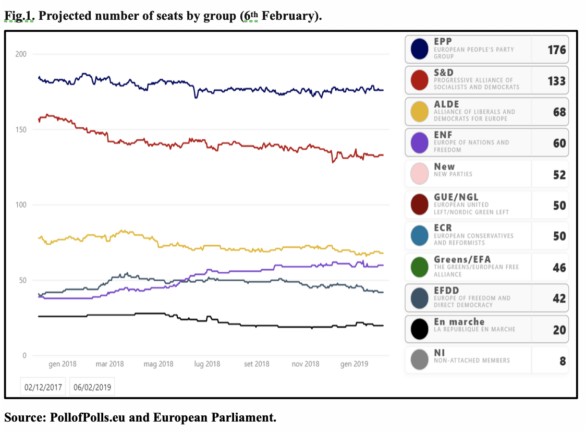 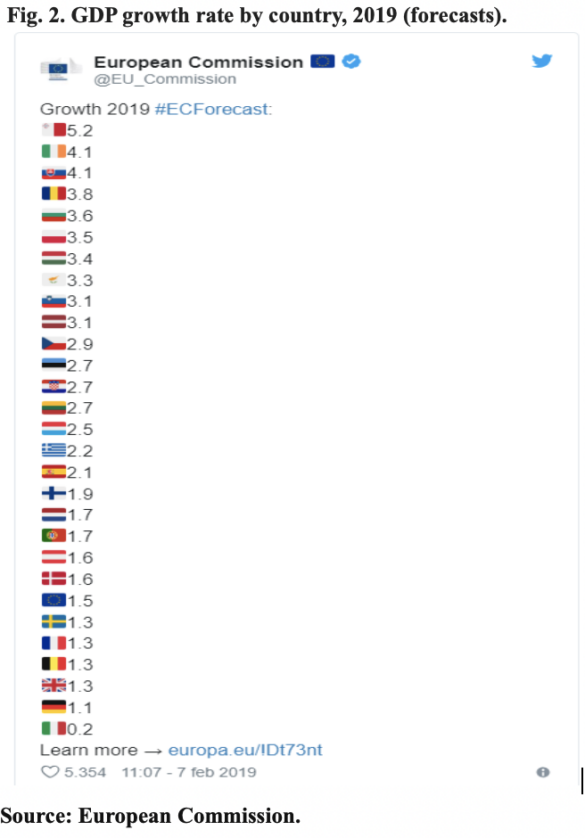