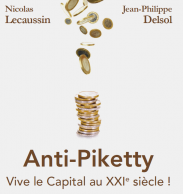 Thomas Piketty’s book “Capital in the 21st century” was dubbed as “blockbuster”. But for a group of French intellectuals under the lead of IREF, a free market institute in Paris, it was important to demonstrate that the French economist’s “Capital” did not deserve its commercial success. “Anti-Piketty” is a collection of essays by renowned international economists and historians, critical of Thomas Piketty’s volume.

The book (in French) can be ordered through amazon, for example.

Thomas Piketty’s book “Capital in the 20th century” was dubbed as “blockbuster”. But for a group of French intellectuals under the lead of IREF it was important to demonstrate that the French economist’s “Capital” did not deserve its commercial success. “Anti-Piketty” is a collection of essays by renowned international economists and historians, critical of Thomas Piketty’s volume.

The book dissects how the one-dimensional explanation given by Piketty of the evolution of capitalism towards a “potentially terrifying” inequality, synthesized in the now famous “r > g” formula, is actually flawed. “Anti-Piketty” follows three major lines of criticism.

First, following a long line of doomsday sayers, Piketty’s apocalyptic “vision” is that of a pessimist who totally dismisses the reality of the reduction of many types of inequality – from access to consumption or access to education, to longevity, to poverty levels among countries. The French economist sees the rich only as “rentiers”. In an ideological rich-bashing mode, he simply forgets that most of them are entrepreneurs who are making the world a better place – and yes, earning a good deal of money in exchange for that. The book is supposedly about capital, but “human capital” – a central element of development – plays no role in it. No wonder why: Piketty’s vision of a society does not include upward or downward mobility. Only the rich gets richer then, as they only can make nearly “automatic” money out of capital accumulation. Yet all this is simply refuted by reality – for instance by the recent history of emerging economies.

Second, whilst Piketty’s Capital was sold on the pretention of its data, some authors actually challenge its empirical content. And it might well be that the data is flawed. From data cherry-picking to “series-picking”, from ignoring many aspects of income evaluation such as the evolution of households’ size to the evolution of tax rules – which matter a bit when one uses tax returns as a reference -, to the comical inclusion of the communist world to grasp the evolution of “capitalism”, the “clear” data of Mr Piketty’s simple message seem, in the end, quite obscure. And obviously, the fact that Mr Piketty does not even test his grand theory against data is a tad bit problematic. Especially as those tests – provided by economists Acemoglu and Robinson – actually show nothing of the – apocalyptic – sort that Piketty “interprets” from “his” data.

Third, the theory is not without problems. Of course, simple formula can make good theories. But sometimes they just don’t. Economics is complex. It’s about human creativity, incentives and responses to different legal environments. Trying to encapsulate the evolution of capitalism in one simplistic “macro” formula is actually a sign of a misunderstanding of how complex “institutions” shape our societies and economies. But then “Capital” also misunderstands capital and returns, which is, well, a bit awkward. Assumptions Piketty uses distort the effect of r > g in an hyperbolic way, making it the great “divergence-maker” that will take us in the dystopian future of absolute inequality.

Given all this serious deconstruction, no wonder the books ends with a harsh critique of Piketty’s prescriptions – which would actually undermine a very important type of equality: the rule of law. Reforms of the complex taxation system that not only in France, but in many countries, people have to put up with, should start with a radical simplification and reduction of progressive rates, certainly not the confiscatory levels of Mr Piketty.

The idea is to recall a simple truth: you can’t create growth and jobs by killing capital accumulation. Hence the subtitle “Vive le capital au XXIème siècle !” (Long live the capital in the 21st century).

It seems sometimes that official French economists just forget entrepreneurs are the drive of development. No wonder a former US president thought the French don’t have a word for entrepreneur… whilst it is a French term of course. But IREF’s collection of essays endeavors to correct all this.