An essential component of a free society is independent press. It plays a central role in preventing both state actors and private interest groups from pursuing their own interests through state power too aggressively. Journalists independent from political and economic power work effectively through two main channels: detecting and uncovering actual offenses, and safeguarding against further offenses. Interestingly, free press does not have to be crowded out by state-run pseudo-tax paid channels.

Sometimes we can hear someone complaining that the most widely read, viewed and clicked newspapers, magazines, television programmes or Internet offers do not reflect their own consumption preferences. Such discontent may be hurt personally. However, it is definitely not a sign of unfree press. Just like on the market for other goods and services, the same interpretation applies also on the market for news and their interpretation: just because there is no supplier prepared to satisfy the demand of a consumer, it does not mean that the entry of such suppliers had been obstructed.

Press freedom is curtailed when journalists and media companies are prevented by the state or by third parties from starting or continuing their work. There are two main indices which evaluate press freedom in countries around the world, measuring the limits to information dissemination imposed by governmental and non-governmental organizations: The Freedom of the Press Index (published by Freedom House) and the World Press Freedom Index (by Reporters Without Borders).

Although both indexes differ somewhat in the method of evaluation, they indicate a relatively high level of correlation: being evaluated “more free“ by one index means a high probability of being evaluated “more free” by the other, too. Norway leads the world rankings, together with the other Scandinavian countries and with BeNeLux.
The graph below shows countries’ rankings according to the latest editions of the two indexes, shown respectively on the two axes. (0 means most free, 100 least free.) 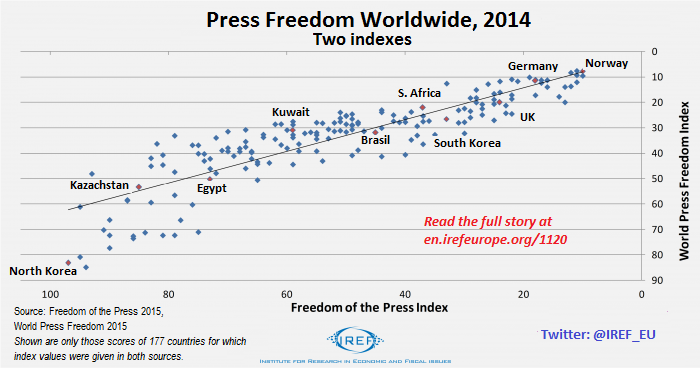 The only “intruder” into the top-scorers from outside Europe is Jamaica, in top-20 according to one index (FPI) and in top-10 in the other (WPFI). The post-Soviet country with the freest press is Estonia.

The answer to the question whether a state-run broadcaster financed from compulsory pseudo-tax sources is a hindrance to press freedom is not straight-forward. In many countries these days government’s media office does prevent other voices from being heard. Even in Britain, in the 1920s, the just born BBC enjoyed a legal monopoly. On radio waves this effectively operated until October 1973 when the first official licence to an independent radio broadcaster (London Broadcasting Company) was awarded, only after the monopoly had been eroded by several (off-shore) “pirate” radio stations since the 1960s.

However, in countries like present-day Germany (ranking 12th and 24th respectively), the state-run compulsory fee-financed broadcaster does leave complete freedom for other, independent broadcasting channels. Although they cannot compete “on price” with the “public media”, journalists in them work without hindrance.

The state broadcaster is expensive to the tax-payer and its genre mixture fails to live up to its charter: It is supposed to specialise in three types of programmes – 1) (quality) entertainment, 2) education, and 3) information. Presumably in equal measure. How far is this mix biased towards “entertainment” is shown on the next chart, based on IREF’s analysis of programmes of two compulsory licence fee-financed channels ARD and ZDF over a random typical week in 2014.

Especially education is squeezed out of the picture almost completely (in the case of ZDF), while plenty of room is afforded to “entertainment”. Yet it is precisely entertainment that independent channels do so well.

So although there is a case to be made for scrapping the state broadcasters and the associated licence fee (ca. €18 per month and household), it is not because they hinder press freedom. It is because they fail to live up to the founding charter and their actual activity can be replaced by independent channels.

The press can control – and support – the mighty

Journalists entertain and inform. At the same time they control those state representatives who were entrusted with some communal responsibilities. At the same time, journalists also support these public officials by helping to uncover and drawing attention to misdeeds in private companies and other private organizations.

The separation of the government and the market in a market economy is never perfect. Nor is the separation of powers within a state. Therefore, there always remains a risk that an alliance may arise either between a private organisation and government officials, or between officials themselves, and that these alliances will go against the public interest which vested some powers (and responsibilities) in the government officials.

A free press, as a non-governmental supervisory body, then acts as an answer to the eternal question “who will guard the guardians?”

How successful will a free press be in this controlling task? That depends mainly on the degree of preparedness of readers and viewers to reward such necessary investigative journalism.

(This text is an anglicised and slightly elaborated version of Alexander Fink’s two recent articles (in German) on press independence and quality of German public broadcasters.) 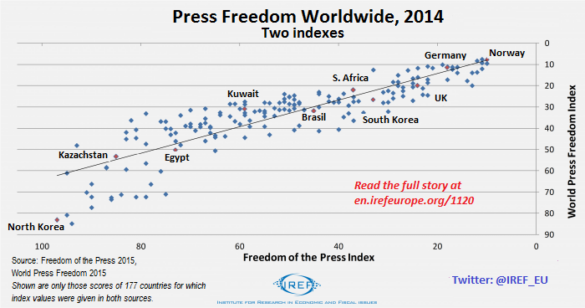