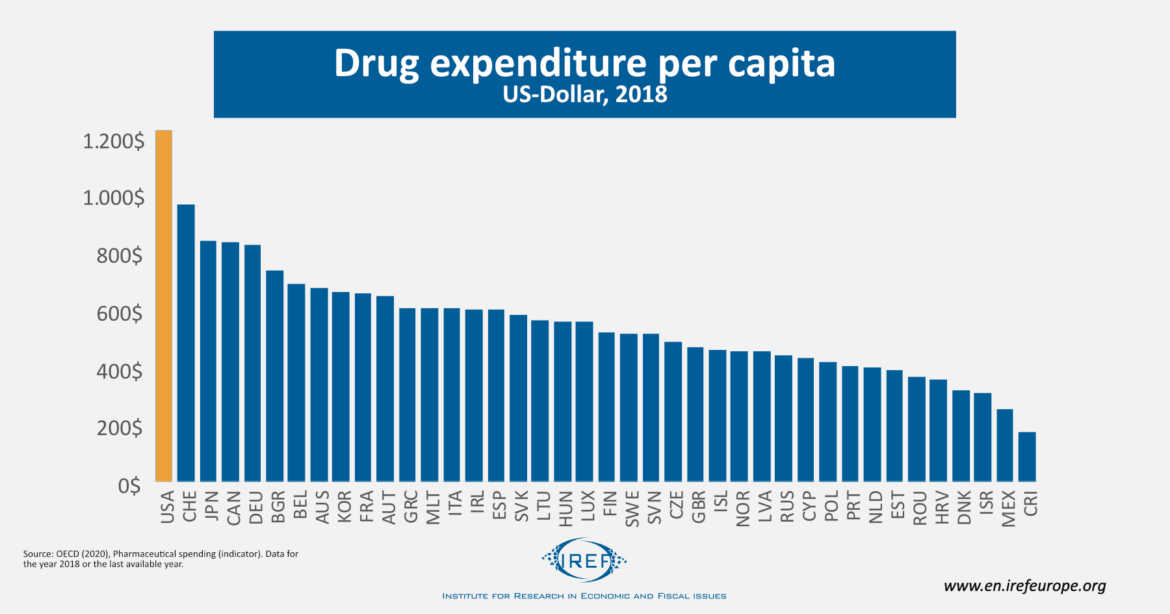 Five years ago, a US American hedge fund bought the distribution rights for Daraprim, a drug to cure AIDS. Overnight, the price went from $13.50 to $750.00. This price increase caused huge public outrage. Yet, high prices for pharmaceuticals are rather common in the US. No other healthcare system around the world spends as much on drugs. Partly responsible for this is the seldom used bargaining power of public insurance programmes on the one hand and, on the other hand, the market power of pharmaceutical firms caused by patents and licensing procedures.

According to OECD data, each year the average American spends $1,200 on drugs. Germans, in comparison, spend almost a third less. Overall, a third of global pharma revenue is made in the United States. One reason for that is the comparatively high prices for medicaments in the US. 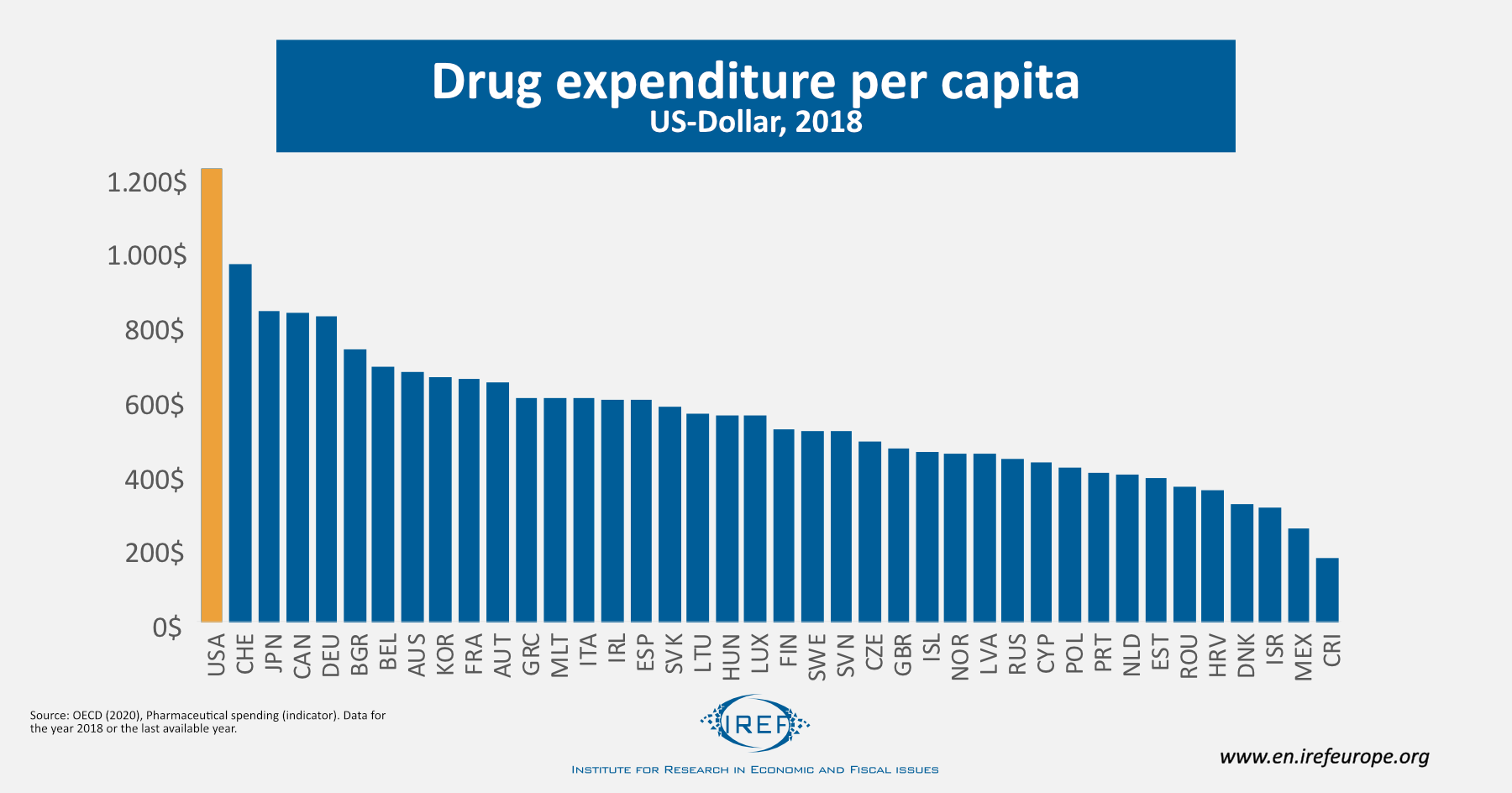 Where do high prices come from?

The development of new drugs takes much time and resources. According to a 2010 survey among international pharmaceutical firms, only one out of 24 projects actually makes it to the market as a licensed drug. The developing and licensing process for each drug takes an average of 13.5 years and costs $1.8 billion.

A main incentive for US firms to bear the high initial cost is patent protection. It lasts 20 years, during which firms are able to charge high monopoly prices. However, monopoly is not the only variable that distorts competition. Lengthy and expensive licensing procedures at the Food and Drug Administration (FDA) play a significant role, too. They delay the entry of new suppliers after a patent runs out. New competitors must prove that their competing medicament abides by the same safety standards as the original drug. Moreover, the licensing process of new drugs can sometimes actively be delayed by the patent holder, who can make comparisons with the original drug harder. Last but not least, the original suppliers are frequently willing to compensate new competitors if they accept to delay entry. Such payments are usually made behind closed doors, for instance as settlements in patent violation trials.

Of course, regulatory and proprietary barriers on the supply side are in place in other countries, too. Hence, their explanatory power for relatively high drug prices in the US is rather limited. In fact, one can have better insight by investigating the demand side of the pharmaceutical market.

In 2018, 296 million people – i.e. over 90% of Americans – had health insurance. About two thirds of them were insured privately, while the rest enjoyed public health insurance. The insurance market also includes two relatively small programmes for the members of the US army (Champva and Tricare). 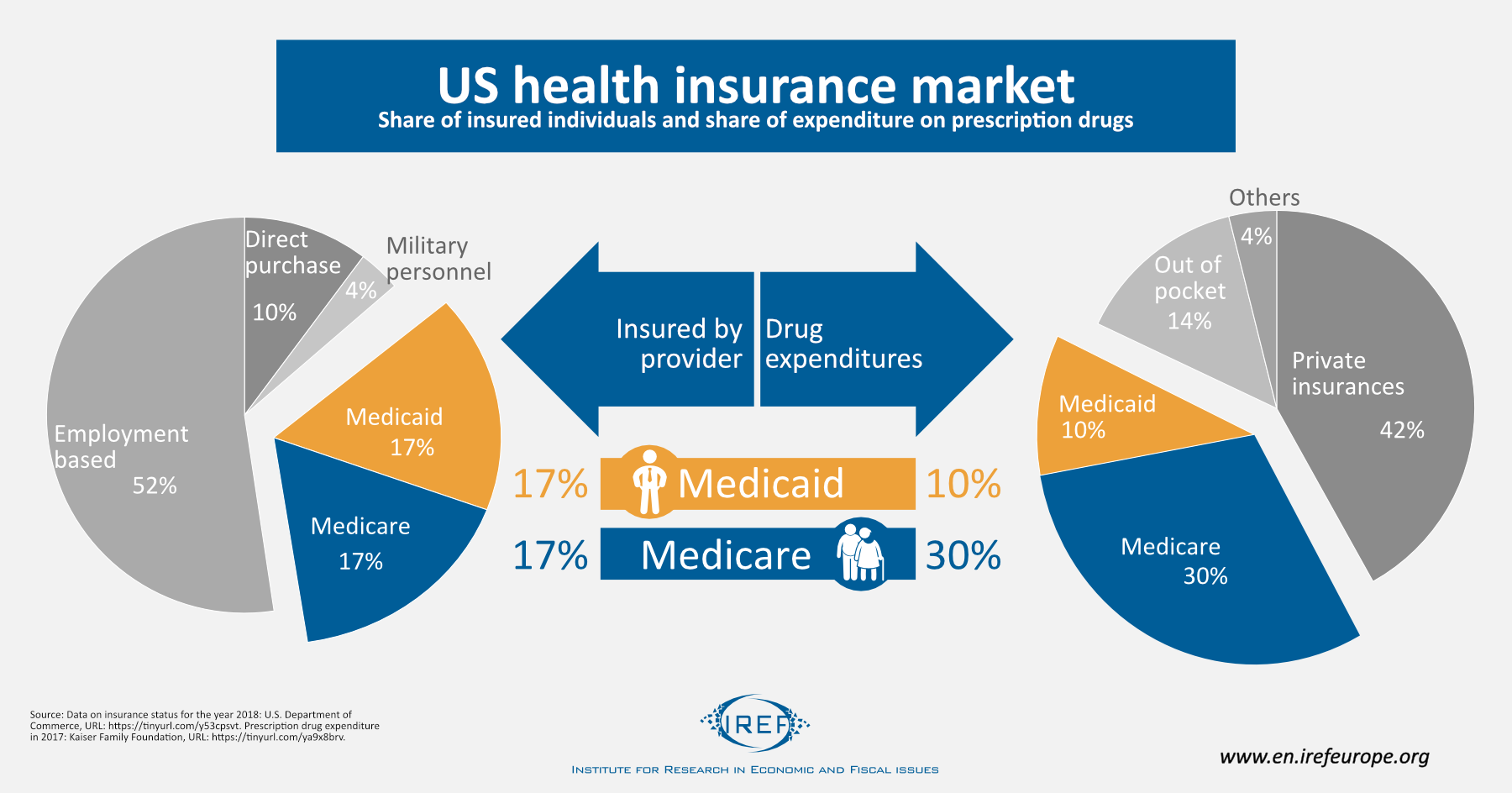 In the USA, more than 50% of those insured are covered through their employers. The high portion of employment-based insurances has historical origins. During the Second World War, wage caps were put in place in the US. Employers were unable to raise their wage offers in order to win over new employees. Instead, they began to offer health insurance services free of charge. To this day, such services are excluded from income tax, and therefore attractive compared to the alternative of privately secured insurance. If an employee turns down company insurance in exchange for a higher salary, the additional money he receives is taxed.

Public insurance programmes mainly consist of Medicaid and Medicare. Medicare insures American pensioners over the age of 65 and people with disabilities. Medicaid is designed for – and supports — low-income individuals.

Medicare and Medicaid: no price negotiations and no discounts

As mentioned above, about a third of all insured people is covered by Medicare or Medicaid. Yet, although it is required by the law to offer its clients all licensed medication, it is illegal for Medicare to engage in price negotiations with the pharmaceutical companies.

The rules of the game for Medicaid are different, and end up discouraging pharmaceutical firms from offering low prices to private insurers. In general, Medicaid demands its suppliers a 23.1% discount on the average market price of a drug or, if lower, the ‘lowest price’ a manufacturer charges to other buyers. Thus, if a producer grants a discount to a private insurer, he has to lower the price charged to the millions of people insured under Medicaid. Of course, these people don’t pay much attention, since the ultimate payer is Medicaid. Producers who refuse to participate in this pricing/discount programme lose access to other programmes, including the particularly lucrative Medicare.

The design of both Medicare and Medicaid leads to idiosyncratic incentives when it comes to price setting. On the one hand, Medicare accepts any price. On the other hand, Medicaid’s ‘best price’ rule means that price discounts granted to private insurances can be very expensive for the producers.

Thus, the bargaining position of the private insurers is weakened by the regulations of both public insurance programmes, which account for some 40% of the drug-market turnover. In truth, many companies (including insurances companies) outsource their drug purchases to so-called “prescription benefit management companies”. These companies lead price negotiations with pharmaceutical firms, regulate the insurance claims of clients, and organise the distribution of drugs. Nevertheless, aggressive price negotiations remain rare because compensation of the managers of the prescription benefit management companies depends on the value of the drug contracts. Even larger companies that play a direct role in price negotiations are less than aggressive because of the potential drawbacks. For example, the cost of poorer access to therapy for their own employees can prevail upon the potential advantages of cheaper price deals.

An ideal situation for the pharma lobby

Overall, high prices for pharmaceuticals in the US are the result of rules that limit competition on the demand and the supply side. Firstly, licensing procedures and patents protect suppliers from competition. Secondly, Medicare is not allowed to negotiate, while the Medicaid’s mandatory-discount rule – ironically, prevents prices from dropping.

Regrettably, high insurance costs caused by high drugs prices are not enough for the single individual to mobilise and ask for structural changes. By contrast, pharmaceutical companies find it easy and profitable to resist change and keep enjoying the rents. 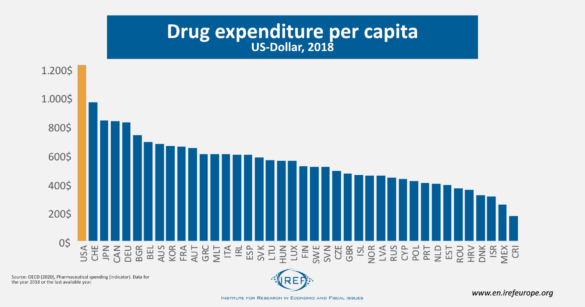 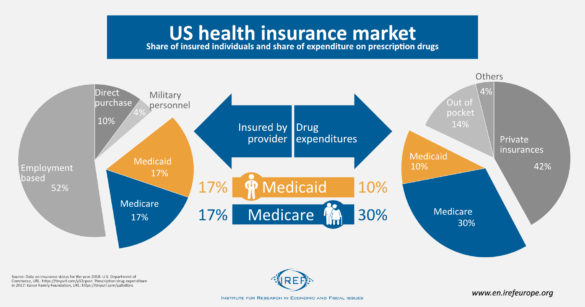