Propaganda Wars: interest on Greek debt is not “profit” 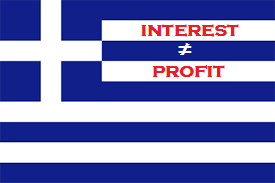 Greece failed to pay a 1.5 billion installment by the end of June. The rhetoric has long portrayed the lenders as fat cats living off Greece’s misery. Varoufakis had his sight on 1.9 billion which he called “ECB’s profiteering on poor Greeks” and should be “returned” to the Greeks to cover the IMF payment. In reality, the sum not only would not solve anything, its interpretation is plainly wrong. But it’s great propaganda for the referendum.

Events on the Greek debt battleground are developing very fast indeed. After years of warnings of a cataclysm being “imminent”, now it finally may be the endgame – although both sides have always concocted yet another “postponing strategy” in the past.
One of the last strategies (proposed by the now deposed Greek finance minister Varoufakis just before the end-of-June deadline) was that the 1.5 billion Euros payable to IMF be covered by the European Central Bank “returning” to Greece the “profit” of 1.9 billion Euros the Bank made on holding Greek debt. In terms of size, it was clutching at straws as it would have only solved the one payment. Worse, it was unjustifiable and the interpretation was plainly wrong. It is yet another illustration of the propaganda war where the other side is portrayed as personified evil.

Greece already defaulted on the majority of its debt to private lenders (banks) back in 2011, although for propaganda reasons it was called debt “shaving” rather than default. At the moment Greece mostly owes to the ECB and the IMF. Under special provisions of these loans, interest on them is either deferred or refunded back to Greece immediately upon its payment. As a result, Greek borrowing is already subsidized at least twice by the ECB (1. lower nominal rate than comparable countries, 2. interest refunds), even before the extra 1.9 billion subsidy demanded. 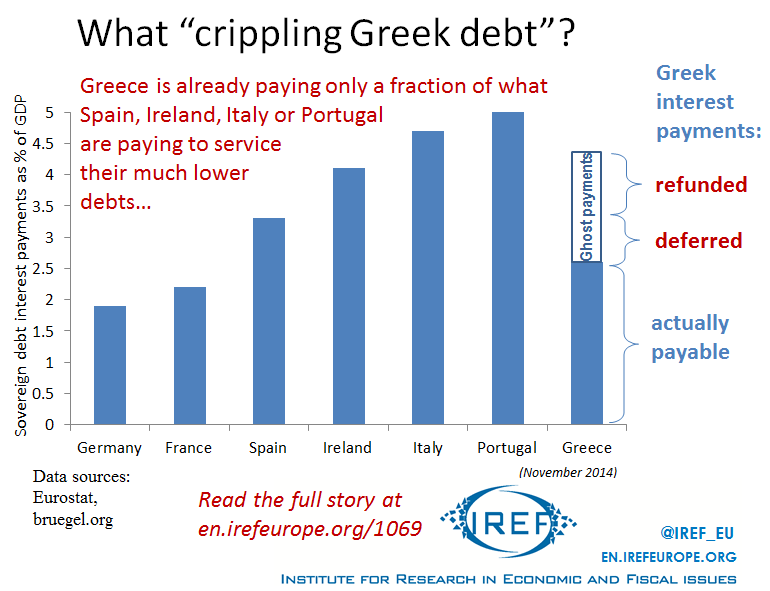 So how can Varoufakis be calling for some new 1.9 billion of profits (read: interest earned) to be returned from the ECB? Isn’t Greece getting the refund already?
It is, but the refund it is getting is on loans designed as ECB loans. As part of yet another “plan to save Greece”, the ECB at one point in the past also started to buy Greek debt from third parties (which obviously did not have the “refund of interest” clause). And it is on these loans that the ECB has made allegedly made 1.9 billion that Varoufakis now wants.

Varoufakis intentionally calls this money “profit”, garnering popular support by making it seem that the “rich bankers in Frankfurt (the seat of the ECB) are greedily profiteering on the suffering of Greeks who were thrown into financial crisis by other bankers”. With a referendum looming ahead on July 5th, the struggling Greeks, the real victims of all this mess, will then have an even more biased view of the situation.
This is because the interest payment is not actually a profit.

Interest is not banker’s profit

Profit is what is left from revenue after costs have been paid for. Any lender of money incurs (sometimes substantial) costs when making our a loan:

There are administration costs. Years of endless late-night negotiatians over Greek debt terms need to be covered. Also, the money returned will generally have lower value because of inflation happening between the loan and any repayment, and that is a cost to be covered by interest. Further, as Greece demonstrates excellently, not all loans are actually repaid to lenders. If the lender lends at 4% and only half of his loans are repaid, she is effectively only earning 2%; the rest is a cost to the lender. Lender has to hedge against this risk, and the interest rate partly pays for this cost.

Above all, however, interest is required to pay off those who are actually coming forward to make the loan. People who have “loanable” money always have the option of spending it on themselves. The only way to convince them to part with it for some time is to “reward” this time with some return. This incentive works in two ways: not only are the lenders willing to lend, but with interest they will rather lend to me than to someone offering no (or lower) interest.

The ECB is no different. It has no “automatic” resources it can “charitably” give to Greece, it is a pool of loanable resources from member states, who also have other interest-paying borrowers to consider.

Besides, the ECB is already charitable enough to Greece, as demonstrated by the already overly generous conditions of Greek loans.

So no, interest paid to lender, even the ECB, is not the “profit” to the lender.

The ECB is by no means without blame for the Greek crisis; it did help to create it and especially to extend it into its current unnecessarily huge proportions. However, charging interest was not the culprit for which it would now have to atone. Indeed, it was not charging enough interest that is largely to blame. ECB’s Euro arbitrarily dropped the interest at which Greek governments used to borrow at – from around 25% to around 5% around the time of Greek entry into the Eurozone. At such rates, successive Greek governments (with short election horizon and liable to being voted out at any time) simply did not resist the temptation to do the bad thing and increase the debt mountain.

The low interest rates made this sin look like a low-cost solution, at the time. But addictions show their true face only later. It is now that we are seeing the true level of costs of politicians’ irresponsibility. 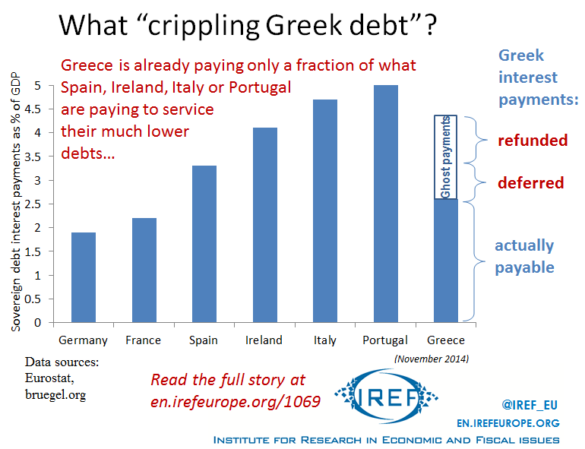