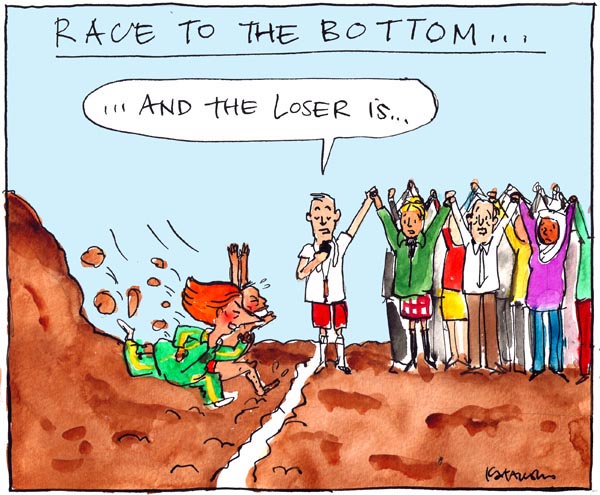 Tax harmonisation in the EU is pursued in order to prevent competitive lowering of tax rates, an alleged race to the bottom. What race?, IREF asks. Taxes are an ever increasing (at best stable) portion of GDP, and have been for years.

The latest European Parliament election resulted in a bifurcated political spectrum. Many more Eurosceptic MEPs were elected, which is expected to make the Eurooptimist core MEPs cooperate even more than before. This may indeed become more than necessary if problems of the single currency continue. Unless Europe changes into an optimum currency area soon, permanent fiscal transfers may be the only way of keeping the currency afloat.

If currency necessity is the mother of invention of a single pan-European fiscal policy, then the father (a useful concomitant) is the alleged prevention of a “race to the bottom”. Individual states’ fiscal policies in Europe should not, it is claimed, compete with each other by making themselves more and more attractive through lower tax rates, since it would all only end in tears of near-zero tax rates and the modern state not being able to function.

How much of GDP is collected through tax?

In a review of the evidence [German], IREF’s Alexander Fink shows that there is no such thing as race to the bottom, neither in the EU nor in the OECD as a whole. Tax revenue as a percentage of GDP has more or less remained constant since the turn of the century, after decades of steady increases. 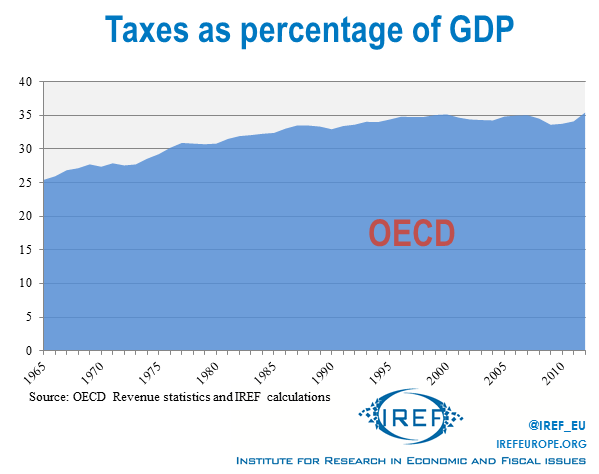 The only real temporary decrease starts in 2008. Since that was a period of general temporary decreases in GDP as a result of the financial turmoil, falling tax/GDP ratio implies that absolute tax receipts must have been falling even faster. By 2012 the share was back to its pre-turmoil level.

It is sad story that OECD economies are only capable of decreasing the share of tax in their GDP during economic downturns. Those tend to be relatively rare (and unhappy) events in modern economies; the future, now that growth has restarted in some OECD countries, is therefore bleak, judging by previous trends. And those, of course, do not even consider the ticking demographic bomb in nearly all OECD countries that will now begin to be felt ever more.

What kinds of tax?

We can gain further interesting insights by considering Fink’s decomposition of taxes according to what is being taxed.

Property tax is in many countries historically the oldest kind of tax. (Large landlords in some countries were – or have been – successful in negotiating immunity with the sovereign, so being oldest does not necessarily mean “longest applied”.)

Economists generally also consider property tax to be “the most efficient” in the following sense: When the sovereign imposes any tax, at least the sum paid is not “lost” in the economy – it just shows up as new roads and new consumption by the state apparatus instead of consumption or investment by the tax-payer. What is lost, however, is the economic activity not taking place as the tax payer tries to avoid the tax. (Economists appropriately call this “deadweight cost”.) Since property in general cannot be taken away to another tax jurisdiction, such extra costs of taxation are very small and therefore property taxation is considered relatively “efficient”.

In spite of this, the following graph shows that property taxes continuously make up a very small proportion of the total tax revenue, both in OECD and in EU countries. It is marginally higher in OECD since property taxes are more prominent in US and Canada and less so in EU’s post-communist members. 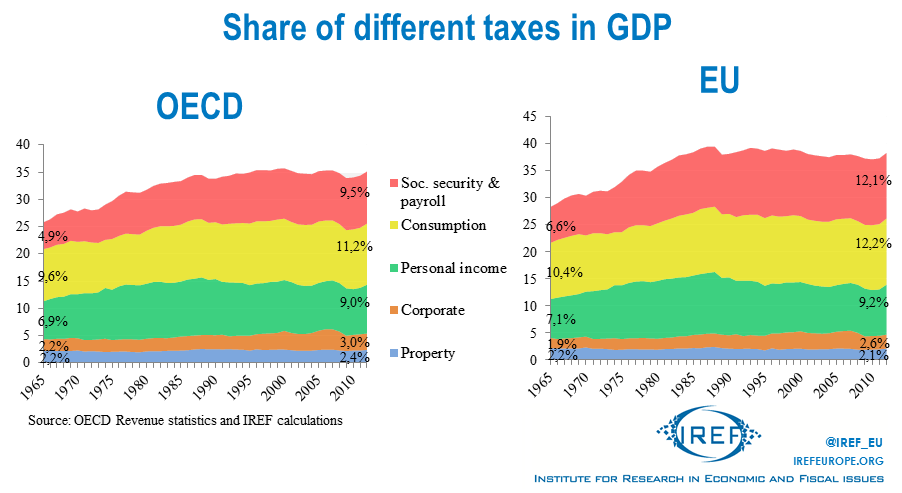 Popular commentaries sometimes concentrate on consumption taxes as dominant. They certainly have a history as old as property taxes, although in the much more constrained form of excise taxes on some strategic goods (like salt) rather than general tax on all transactions. As seen in the graph, they still dominate, although relatively much less than in the 1960s.

The biggest inroads into consumption tax’s dominance were made by social security and payroll taxes. In the 1960s they collected just over half as much as consumption taxes, but now they have almost matched them, certainly in the EU.

This interesting trend has some wider implications. Some countries do not include social security payments as part of the officially quoted tax figure, which then appears artificially low. If the share of such taxes is growing, the gap between reports of comprehensive tax rates and reality is widening.

The situation is even worse. What little tax competition there may occasionally be, it tends to be “bought” not by equivalent reductions in spending, but by increased borrowing and debt. And that, as Mr. Fink rightly concludes, only shifts the tax burden onto future generations and makes it harder to judge between the winners and losers of the meagre tax competition in Europe.

That kind of tax competition – race not to the bottom but to the bottomless pit of debt – is very dangerous. We need to be careful what we wish for because we just might get it..

Taxes as percentage of GDP 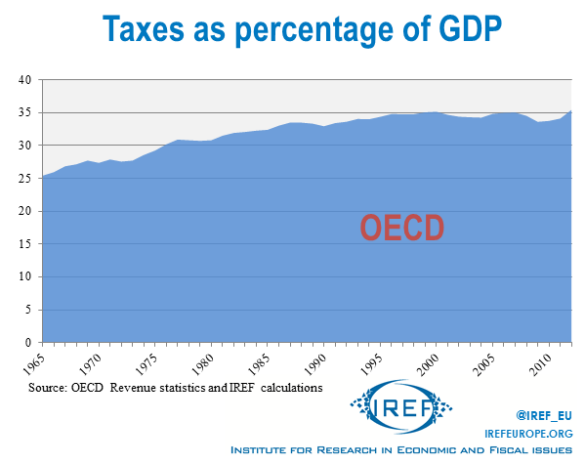 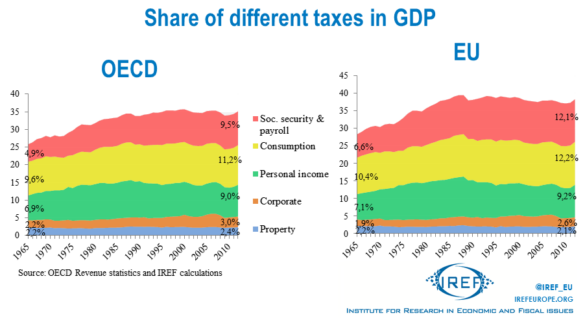