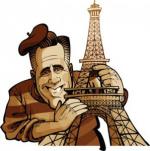 In his book The Anti-American Obsession, philosopher Jean-François Revel exposed French fantasies and clichés on the United States and towards its President. It is customary in France to poke fun at US Presidents, treating them like morons who have gotten elected head of state in some miraculous fashion: Nixon was thus a dangerous reactionary, Carter simply a “peanut salesman”, Reagan “an excited cowboy”, George W. Bush “a real idiot”. Two Presidents have largely escaped French insults: Clinton and Obama. Both are Democrats, the first being elected after “the disaster of the Reagan era”, the second after the “terrible years of Bush Jr”.

As in many parts of the world, Obamania has been the fashionable ideology. And whatever the economic outcomes of the last four years, the important thing is to get Obama reelected! For on the other side stand two extremely dangerous candidates: Romney and Ryan. Their America is “the one that frightens us”, as the leftist weekly Le Nouvel Observateur stated on its front page. This America wants less taxes and smaller government (meaning no social insurance or health care), it is very right wing (religious, anti-abortion and pro death penalties). It is an America that is “viscerally anti-Obama”, its “dirty dozen” pursuing one single objective: bringing down the President. Among these are Karl Rove, Mitch McConnel, Eric Canto, Scott Walker, Rush Limbaugh …

Candidate Romney is also a “simpleton” who wonders “why airplane windows don’t open” (this comes up in the first results when typing Romney on google.fr!). Following the television debates with Obama, although it is recognized that the Republican candidate came out on top in the first debate, he held a “hypocritical” attitude by promising tax cuts for … the wealthiest. Romney is the candidate for yet deeper social inequality. The famous sound byte on the “47 per cent of the Americans” was repeated ad nauseam in the media. In a country like France where obtaining entitlements is a national game left, right and center, attacking those receiving handouts is considered a capital offense.

At Romney’s side stands Paul Ryan, “a theoretician of ultra-liberalism” according to the daily Le Monde. He is the “extremist” who wants to practice the ideas of Hayek and Ayn Rand, by letting the poor get poorer, and wealthier richer still.

In terms of foreign policy, the French see Romney the Republican as a kind of “new Bush”, a dangerous and naïve “war-mongerer”. Le Monde even ran the following headline after the Boca Raton debate: “Diplomacy: the Republicans at a loss”. According to the journalist “the former governor of Massachusetts has nothing to say on American diplomacy. Should we blame the mollifying effects of the humid climate of Florida?”

And naturally the famous Bernard-Henri Lévy writes his column in the weekly Le Point under the headline “Why Obama will win”. A Romney victory is simply ruled out: “An Obama win will benefit America; it will also be, whatever might be said, good news for the rest of the world.”

One single French politician has dared to admit that he would cast his vote for Romney. But otherwise along the entire political spectrum, from the far left to the far right, including socialists and Gaullists, the politicians are all Obama fans. How could it be otherwise in a country where the government is everything?

Nicolas Lecaussin is Director of Development at IREF (Institute for Research on Economic and Fiscal Issues) in Paris.