Copyright 2022 IREF Europe
Home » So different, yet so alike (to Donald Trump?) The 2019 Democratic Primaries on Twitter
Online Articles 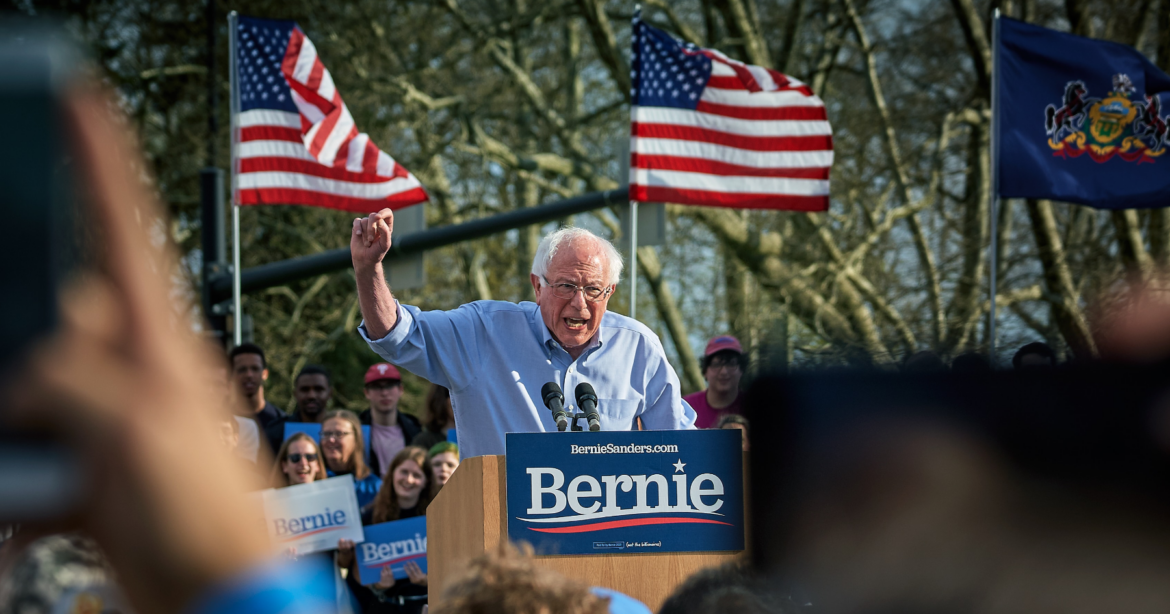 After the incredible Republican presidential primaries opened the path to the surprising, to say the least, Donald Trump Presidency in 2016, today the Democracy Party is involved in a quite similar situation. While three years ago there were 17 candidates at the Republican primaries (5 of them withdrew just before the primaries), now the Democratic Party has reached 25 candidates. Of course, not all of them appear to have a real chance of winning the primaries. Still, according to the latest RealClearPolitics.com survey average, there are at least seven candidates with a percentage larger than 2%. They are Joe Biden, Vice President of the United States under the Obama Presidency; the “eternal” Bernie Sanders; the surging (according to the latest polls) California Senator Kamala Harris; the Massachusetts Senator Elizabeth Warren; the Mayor of South Bend Pete Buttigieg; the media beloved Beto O’Rourke; and, finally, the New Jersey Senator Cory Booker.

In an attempt to better understand their positions, in the aftermath of their second television debate I have decided to focus on what these seven politicians write on their official Twitter accounts. In particular, I have analyzed their latest 3,000 posts. On average this covers a temporal period between 8 to 12 months.

First, I decided to identify their position on a general pro-State/pro-Market scale by employing the dictionary proposed by the political scientists Michael Laver and John Garry. For the curious reader, I have explained this methodology in a previous IREF article. The results are presented in Figure 1. I have also reported in the figure the position of Donald Trump, to make the comparisons easier. It appears that all the Democratic candidates place themselves on the pro-State side of the economic scale, in contrast with where Donald Trump stands. Interestingly, the candidate usually portrayed as “moderate” (i.e., Biden), is placed far to the left of this scale, possibly to lure the growing (and vocal) liberal basis of the Democratic party. 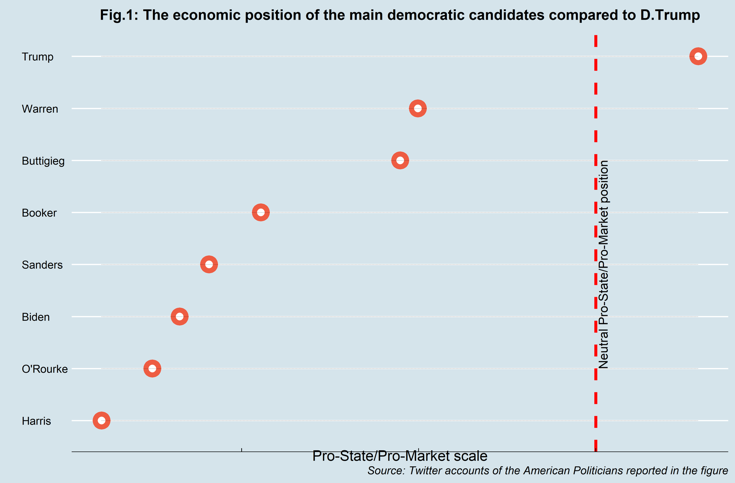 Another relevant policy dimension in this Democratic primaries campaign relates to the environment. Figure 2 shows the position of the Democratic candidates (once again together with that characterizing Donald Trump) on two dimensions: the economics vision mentioned above, together with a pro-environment scale (once again, I take advantage of the Laver-Garry dictionary). Again, the positions of all the Democratic candidates appear remarkable different from Donald Trump’s, and confirm the high level of ideological polarization of U.S. politics. In particular, Bernie Sanders and Kamala Harris are located at the top of the policy space (strong environmentalism). 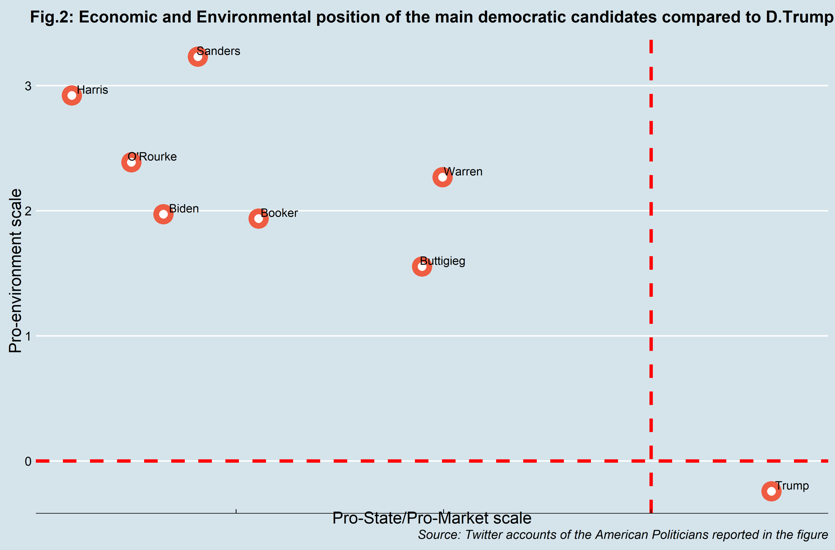 Of course, nowadays political competition is not based on policy issues alone. Two other dimensions of political confrontation that have attracted increasing attention relate, respectively, to the level of negativity of a politician’s speech as well as to simplicity (or, on the contrary, complexity). Both dimensions are often linked with populism: it is argued that populist communication means simplified political discourse, in an attempt to reach the public more easily, and emphasise the difference between the “people” and the “elite”. In pursuing this strategy, populist leaders focus on a negative rather than a positive language. In particular, they attack their opponents, quite often with very harsh words. Figure 3 reports the scores of the Democratic candidates along these two dimensions. The blue bars reflect the overall level of complexity of their Twitter posts, estimated by measuring their lexical diversity, i.e. the range and variety of vocabulary deployed in a text by the same author. The more variety, the higher the index. And vice-versa. The red bars report the level of negativity of each Democratic candidate, estimated as the ratio between the number of negative words contained in their Twitter posts, in accord with the Lexicoder Sentiment Dictionary. 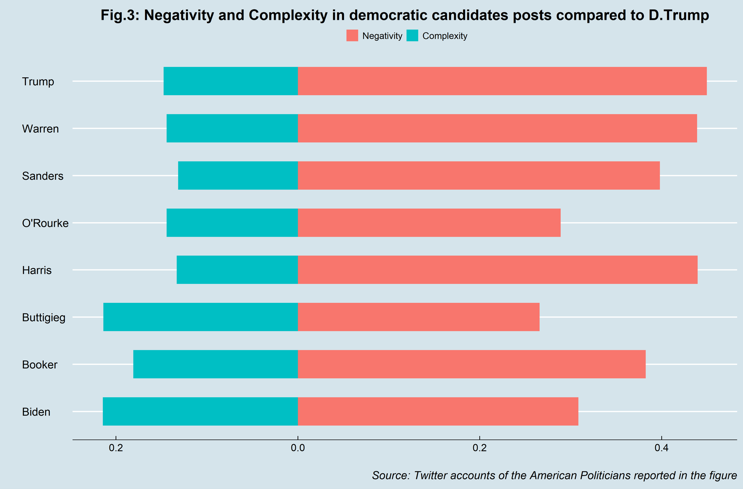 Two main conclusions follow from this picture. As expected, the two dimensions are highly correlated (R-Pearson: -0.69). Second, and quite surprisingly (perhaps…), several of the Democratic candidates seem to be as populist as Donald Trump – at least in term of the two variables taken into account here. For example, the level of complexity of Trump is low, but not so low as Bernie Sanders’, or Kamala Harris’, or Elizabeth Warren’s. With respect to negativity, the relatively high score characterizing President Trump is not surprising. Still, and once again, is not much higher than Kamala Harris’ or Elizabeth Warren’s.

We conclude with a question: are we witnessing a polarized U.S. politics (on policy), with a strong populist drive by all contenders? 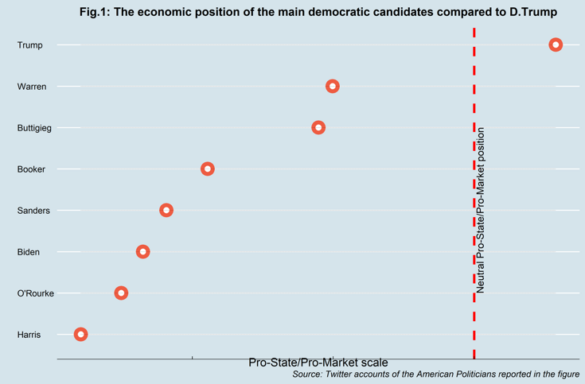 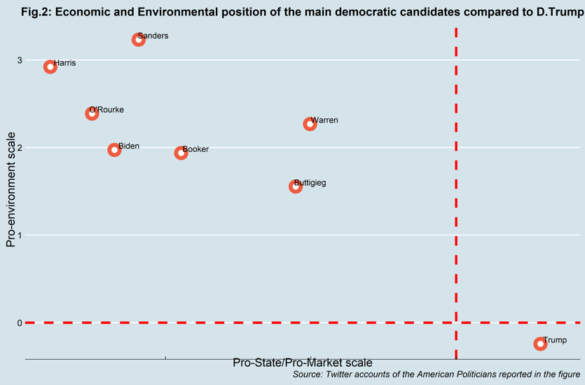 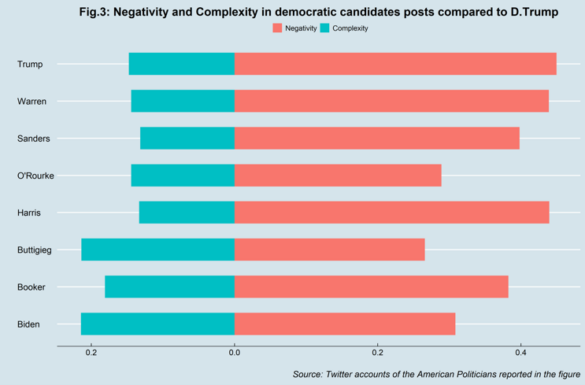