Swiss referendum on minimum wage and the EU 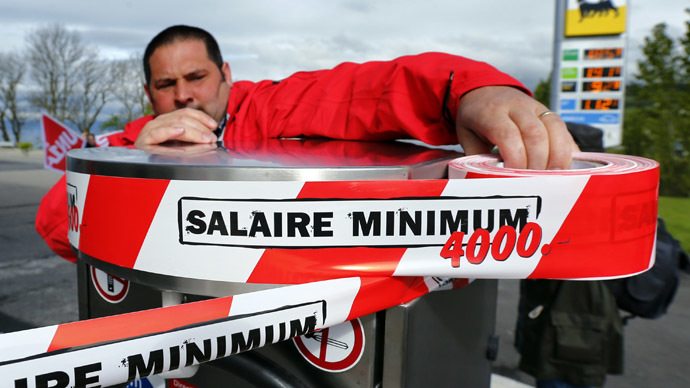 If the Yes campaign wins today, Switzerland will have by far the biggest minimum wage on this planet. We analyse this trend in a wider context of contemporary European popular movements. We suggest that the Swiss Minimum wage proposition has actually very little to do with the traditional concept of “minimum wage”. Lessons for the EU go much deeper than the standard effect of minimum wage on jobs.

Today, 18 May 2014, Switzerland has no minimum wage, only a set level below which collectively bargained wages should not fall. Yet Swiss wages are the highest in Europe (approaching 6000 Euros on average) and the whole country is among the richest in the world. Tomorrow, 19th, it may be on a path towards having the world’s highest mandated minimum wage. Many things work the other way round in Switzerland, and so does this. While in the US increased minimum wage is something that the government (through president Obama) is trying to sell to the people these days, arguing for a an increase by a third to $10.10, in Switzerland it is (a part of) the people who are trying to convince their government, fiercely opposed, that they should adopt the measure.

Latest polls show that the initiative is unlikely to succeed. [Update: about 77% of voters voted against the proposition.] After all, only last year the Swiss voted down a proposal to increase the number of weeks of paid leave from work. (Can you think of another country where such measure would be rejected in a referendum?) Even if the measure does pass, however, it will not be the end of the world, in spite of the doomsday scenarios. Yes, the astronomical proposed minimum wage of CHF 22 (approx. EUR 18) would be damaging. But Swiss referenda are very different from European ones. In the EU, when a country votes in a referendum against a latest common European measure, it soon votes again. If it rejects it again, it soon votes again. And if it ever, just once, says yes, or if the measure is adopted anyway through different constitutional means, it never ever has a referendum on that question again. In Switzerland, on the other hand, nothing should prevent a future referendum from removing the instituted minimum wage (though realistically, due to a ratchet effect, it would probably “only” lower it, not remove it altogether).

In certain sense, Switzerland is not that different from general European trends. Its unique level of direct democracy only means that it is ahead of the game. Today’s referendum has to be seen in a wider context of popular appeals for greater redistribution making their rounds throughout Europe in recent years, greatly boosted by the financial downturn and the blame levelled at the financial sector. Last week we wrote about calls for basic income to be instituted around the world, or at least around Europe. Everywhere else supporters face a long struggle to convince both public opinion and the government to consider the issue, only in Switzerland can it be put to the vote with relative ease.

The proposed seriously high basic income for everyone can be seen as a lukewarm derivative of the ultimate goal of many utopians – same outcome for everyone. In fact, the following conceptual table of derivatives may brush over many nuances and suffer from imperfect generalizations, but it provides some useful perspective for the radical reformist of today.

Is it really minimum wage?

The fourth item in the table is arguably the youngest member of the family. So far most recent calls have used social pressure to achieve their goal – put it out as an issue and try to shame employers into paying it. Proponents have to resort to such social pressure in the EU (and the US) since it hasn’t gained enough popular support that it would become an election-deciding issue. Switzerland, once again, plays the role of an avant-garde here, because people can put these popular movements directly to vote. And here lies a key to understanding why all of a sudden the Swiss are voting on such a big jump from their status quo:

The Swiss are not voting about minimum wage; they are voting about a living wage to be made obligatory, for the first time anywhere on this planet.

This is very much the impression one gets from browsing the numerous activist websites. References to “decent” life such wage should bring about abound, the official poster of the Yes campaign calls for “fair wages” (“for a strong country”). The constituency is virtually identical to that for the forthcoming basic income initiative. Standard appeal is to support this “minimum” wage initiative as a preparation for the “big one”, basic income initiative, which will definitely be put to vote in the next year or two since it has gathered enough signatures.

The paradox of reluctant EU politicians lies in the fact that many of them already boast about paying their interns “living wage”. That is presumably the cheapest form of self-advertising since no politician has ever paid his or her interns out of pocket.

There are already voices in the EU calling for an EU-wide minimum wage. There is one sense such a move would be disastrous beyond its “standard textbook” effect on the relative prices of labour and free time, and the ever increasing possibility of replacing the cheap unskilled labour with machines, ultimately removing those jobs for good.

Minimum Wage for the EU?

An EU-wide minimum wage would remove competition, from a market which claims to be all about internal competition. Suppose that a nameless country suffers from the effects the Euro is having on its economy. It cannot depreciate its currency, it will not be able to attract investment by lowering its tax rate much (since it would be accused of being a tax haven). What options are left? Such country should be able to lower its minimum wage, at least temporarily, to attract investors in that way, and gradually see its economy pick up again.

Indeed, this is precisely why this referendum on Swiss minimum wage is so utterly unSwiss: the Swiss owe their wealth to their internal competing systems and often overlapping jurisdictions and cultural ties and customs. Without the ability to experiment locally and cantonally with what works and what doesn’t, Switzerland has no hope. And we have no hope in learning from its laboratory research, both from successes and mistakes. There would be nothing wrong in principle with a canton setting up a minimum wage, just like there would be nothing wrong with an EU country doing so. Go ahead, institute a huge minimum wage. Maybe the economists got it wrong, it wouldn’t be the first time or the last. After all, how can we be sure it wouldn’t work if no-one actually tries?

But there must be freedom of entry and exit in any such experiment – both if it proves successful as well as if it blows up. There is nothing worse than a lab blowing up and trapping everyone inside because the doors are locked.

With free movement of labour, let different cantons and EU economies experiment. People will themselves decide what works for them and what doesn’t. But do not experiment centrally. The costs of failure would be too large.