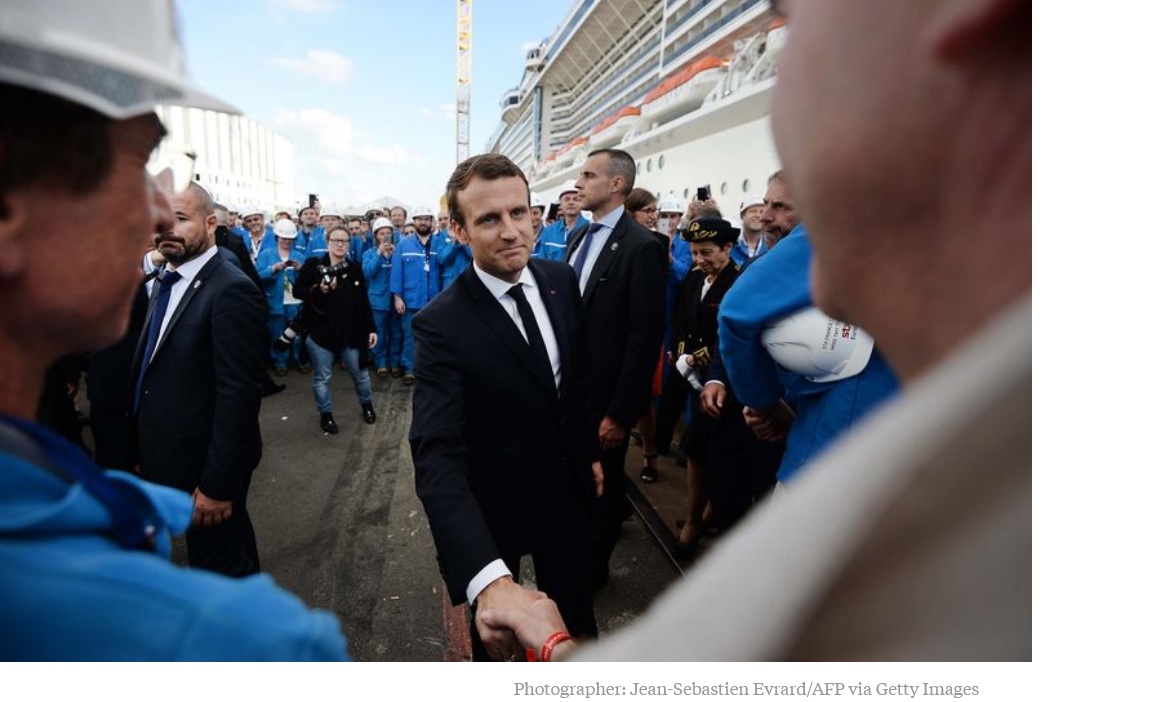 In April, the European establishment and business communities welcomed the election of Emmanuel Macron as President of the French Republic. The election was interpreted as a positive sign for the future of an integrated and liberal EU. Indeed, in his electoral campaign the “new man” of French politics even went so far as promoting the institution of a Unique Ministry of Finance and Budget for the Union.

However, close to the end of July Macron blocked the acquisition of the 66,7% of STX France (the French shipbuilding company controlled by the Korean STX Offshore&Shipbuilding) by Fincantieri (the Italian giant of the shipbuilding industry). The deal, negotiated in spring between the Italian and the French Governments (the Italian and French Governments own significant portions of, respectively, Fincantieri and Stx France) was supposed to take effect by the end of July, making possible the creation of a global colossus in the civil shipbuilding sector (26,000 workers and a € 5.5 bn of turnover). Together, Finacantieri and Stx France, could cover 60% of the global market of cruise ships building.

In spite of his support of competition and free markets during the election, the new French President opted for a temporary nationalization of the STX shipyard of Saint-Nazaire on the Loire (one of the most modern shipyards in the world and the only one in France where aircraft carriers can be produced), proposing a new deal to the Italian government: “We offered a 50-50 agreement between Italian and French partners: 50% to Fincantieri, 33% to the State of France, 14,66% for the French corporate Naval Group, 2% for the workers” the French Ministry of Finance Bruno le Maire, added: “In our proposal the president of the board of administration, designated by Fincantieri, would be decisive in case of parity”. If Italy did not accept these new conditions, France would finally exercise the Golden Power provided by the French law to protect national strategic business from foreign takeovers.

The French President seems to have forgotten his pledge to support competition, markets and European integration and appears to be trapped in domestic politics. Macron, whose public support has recently diminished, also faces pressing requests by trade unions (Saint-Nazaire employs 2,600 workers).

The Italian side of the coin

The Italian Ministry of Finance, Padoan, recently affirmed: “Fincantieri must have more than the 50%, since the Koreans held two thirds of STX France”. Indeed, Fincantieri acquired, in accordance with the French Government, 66.7% of STX France from the Korean STX Offshore&Shipbuilding by presenting a binding proposal to the court of Seul.

The Italian political involvement is significant as Fincantieri is a state owned company, participated by the Ministry of Finance through Cassa Depositi e Prestiti. According to the analysts of Equita “The operational control would be essential for Fincantieri to close a reasonable deal on a strategic and industrial perspective”. It is, therefore, not surprising that the Italians are not thrilled with the new deal proposed by Macron.

The solution: a more ambitious agreement?

What is astonishing and rather frustrating is that in the news the story is not about the business plans of two global corporations, but the diplomatic relationship between France and Italy. Unfortunately, we are talking about an Italian public company that is acquiring a French one. Consequently, a private sequence of business events has become a diplomatic case. Unavoidably, the political debate is having also financial repercussions (Fincantieri quotation suffered huge blows after France proposed the new deal).

These heavy public encroachments in events of normal market dynamics are unnecessary and harmful. If the two companies were not state-controlled, we would be discussing about the acquisition of a company close to bankruptcy by a performing market leader (in the first semester of 2017 Fincantieri Ebitda and Ebit increased respectively by 29.2% and 44.2%, while the net income is of €11 mn, 6% higher than in 2016), aiming to strengthen its global offer. Such dynamics are taking place, ironically, within the (rhetorically strenuously defended by Macron) European Single Market. Political meddling in business dynamics is myopic, dangerous and, in the end, harmful to business and taxpayers. It is not the first time that politics creates trouble: as our readers might recall, political squabbles obstructed the takeover of Alitalia by Air France in 2008. The same is currently happening between Telecom and Vivendi.

Regarding Fincantieri and STX France, France and Italy agreed to try to find a solution within a couple of months. The keystone may be an agreement providing, besides the reinforcement of the civil shipbuilding industry, also a military development plan. From this perspective, the presence of Naval Group among the shareholders of STX France and its previous collaboration with Fincantieri may be crucial. They could create a transnational entity operating in the European defense sector (the “strategic plan Magellano” sponsored by the CEO of Naval Group Hervè Guillou that would lead to the realization of the “Airbus of the seas”). This deal represents a real test for French and Italian politicians to prove their Europeanism and commitment to a European single market. If the deal failed, Europe would miss a great opportunity, and the European politicians would lose another portion of credibility.