Copyright 2022 IREF Europe
Home » The consequences of the Covid-19 lockdown: what does history teach us?
Online Articles 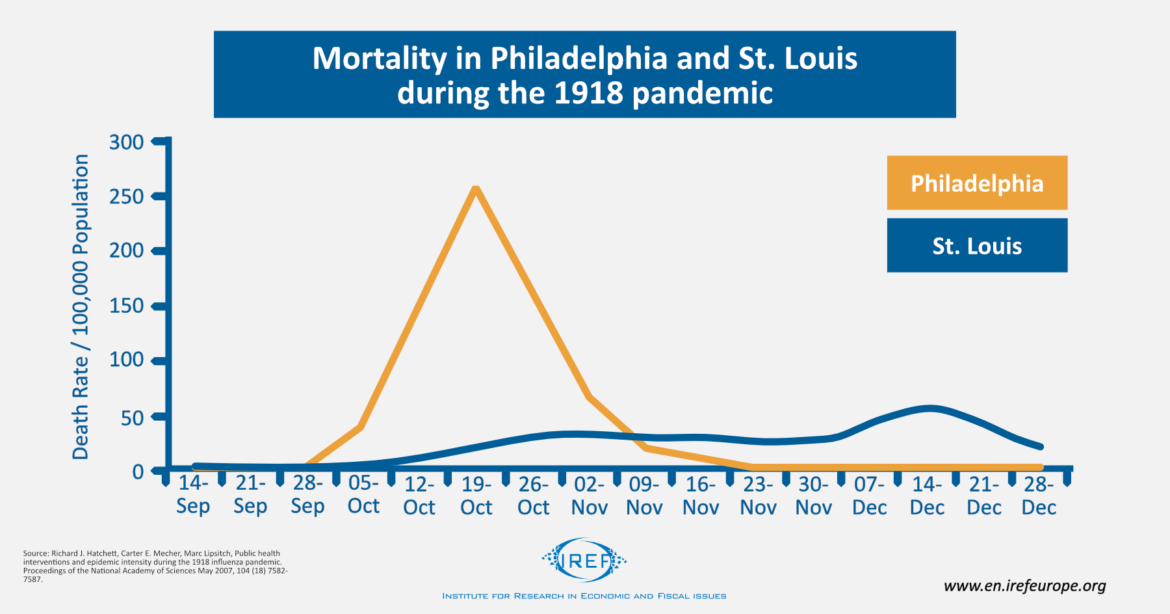 Last February, this website hosted an article titled «The unintended consequences of coronavirus». At the time the article was published, the situation was not at all dramatic in Europe. For example, the official Covid-19 figures in Italy and Germany mentioned very limited number of cases. Governments were confident that everything would be under control, as witnessed by the fact that on February 15, two tons of medical equipment were shipped to China.

In hindsight, it is apparent that most health authorities were not at all ready to cope with the virus. Large numbers of healthcare workers got infected; ventilators and other types of medical equipment were in short supply; many political leaders lacked a strategy, let alone a plan.

Yet, news from China were leaking since the end of 2019, and many governments seemed to be better informed about what was happening than they have admitted. It is surprising that most health authorities failed to take action. US president Donald Trump tried to persuade Americans that Covid-19 was similar to a regular flu, and it took him a while to admit he was mistaken and change tack. UK Prime Minister Boris Johnson announced that many families would have to accept the risk of losing some of their loved ones so as to reach herd immunity. He then changed his mind, just before he was moved to intensive care. The World Health Organization’s behaviour has also been puzzling. For example, it took them weeks to recognise that face-masks are useful, it took them months to produce sensible broad guidelines on what to do, and it took them until mid-April 2020 to recognise that wet markets – selling fresh produce and live animals butchered in the open air – contribute to spreading the virus.

The economic consequences of the lockdown

In January, it would have been foolish to propose to freeze the movement for people between the West and the Far East. Although it now appears that the costs for the Western economies would have been smaller than those currently incurred, the economic consequences of such a move would have been substantial and the proposal would have met strong opposition.

Certainly, lockdowns involve a significant reduction in economic activities. The problem with lockdowns, however, is that the cost is clear, while the lack of counterfactual analysis makes the benefits are uncertain. Thus, the incumbent authorities end up enforcing partial lockdowns, to avoid criticism by the business community and political opponents.

Does historical evidence provide some help? Some articles analysed the situation of the US cities during Spanish flu (1918-20) and provided interesting insights and guidance. Here I mention two of them. One contribution shows the effects of Non-pharmaceutical interventions (NPIs) intended to reduce infectious contacts between persons. The authors analysed data on the timing of 19 classes of NPI in 17 U.S. cities during the 1918 pandemic. They found that peak death rates in cities where multiple interventions were implemented at an early phase of the epidemic were about 50% lower than in cities where the authorities took action relatively late. Epidemic curves were also less steep, and cumulative Spanish-flu-related mortality was lower in the former group of cities. For example, Fig. 1 compares mortality between Philadelphia and St. Louis, two cities where the authorities promoted social distancing with a different timing. In particular, Philadelphia responded to the influenza epidemic much more slowly (relative to St. Louis, there was a 14-day delay from the first reported cases). Not surprisingly, Philadelphia ended up facing a considerably larger epidemic.

Thus, the first lesson history teaches is that timely Non-pharmaceutical interventions, and social distancing in particular, is efficacious in reducing the consequences of the pandemic on public health. 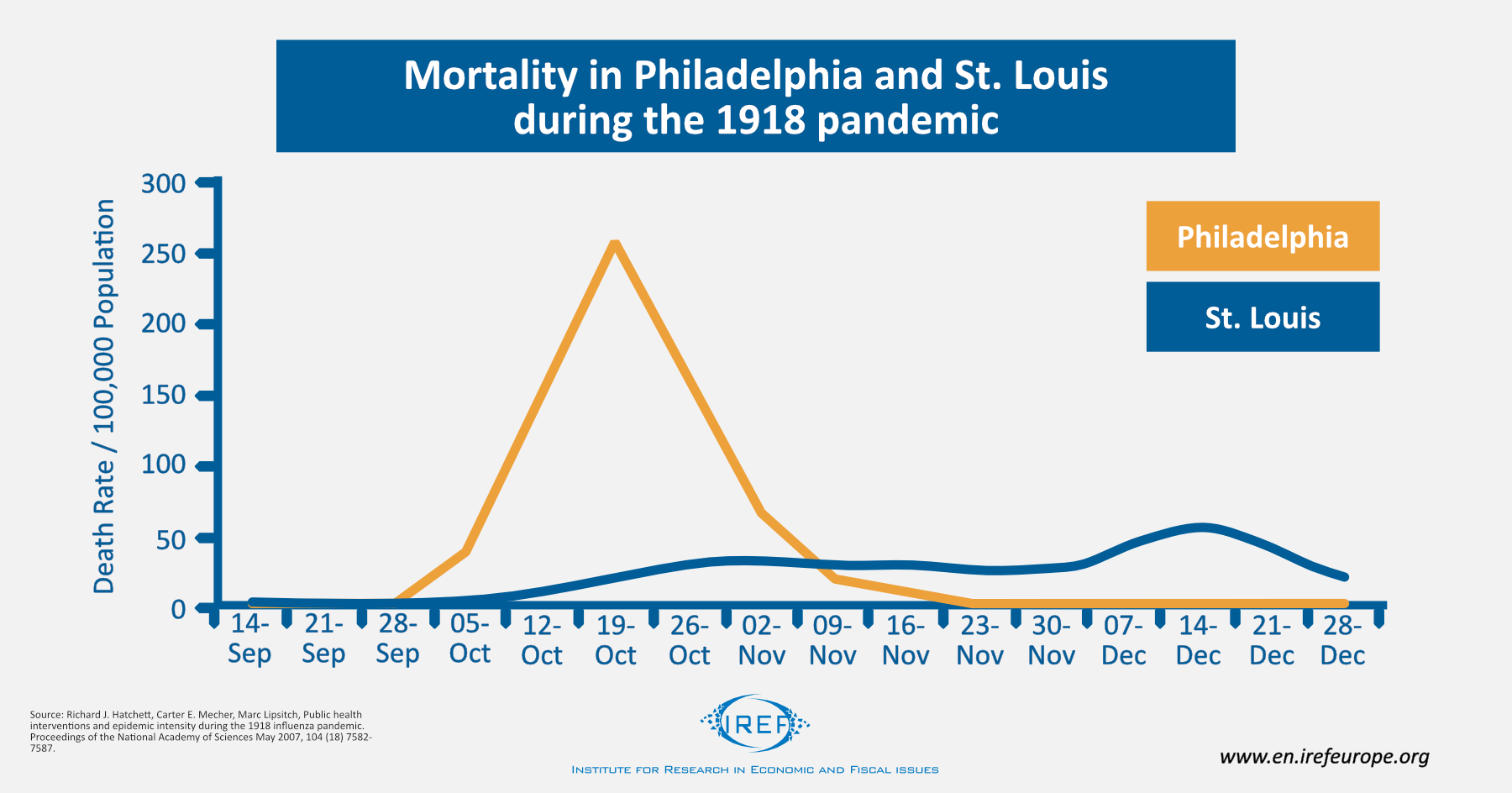 What about the effect of Non-pharmaceutical interventions on the economy? A recent article studies the economic effects of the 1918 pandemic in the U.S. The authors find that areas more severely affected by the 1918 Flu Pandemic experienced a sharp and persistent decline in economic activity. Yet, it appears that early and extensive NPIs had no adverse effect on local economic outcomes. Indeed, the evidence suggests that early and aggressive action is likely to lead to faster economic recovery after the pandemic. 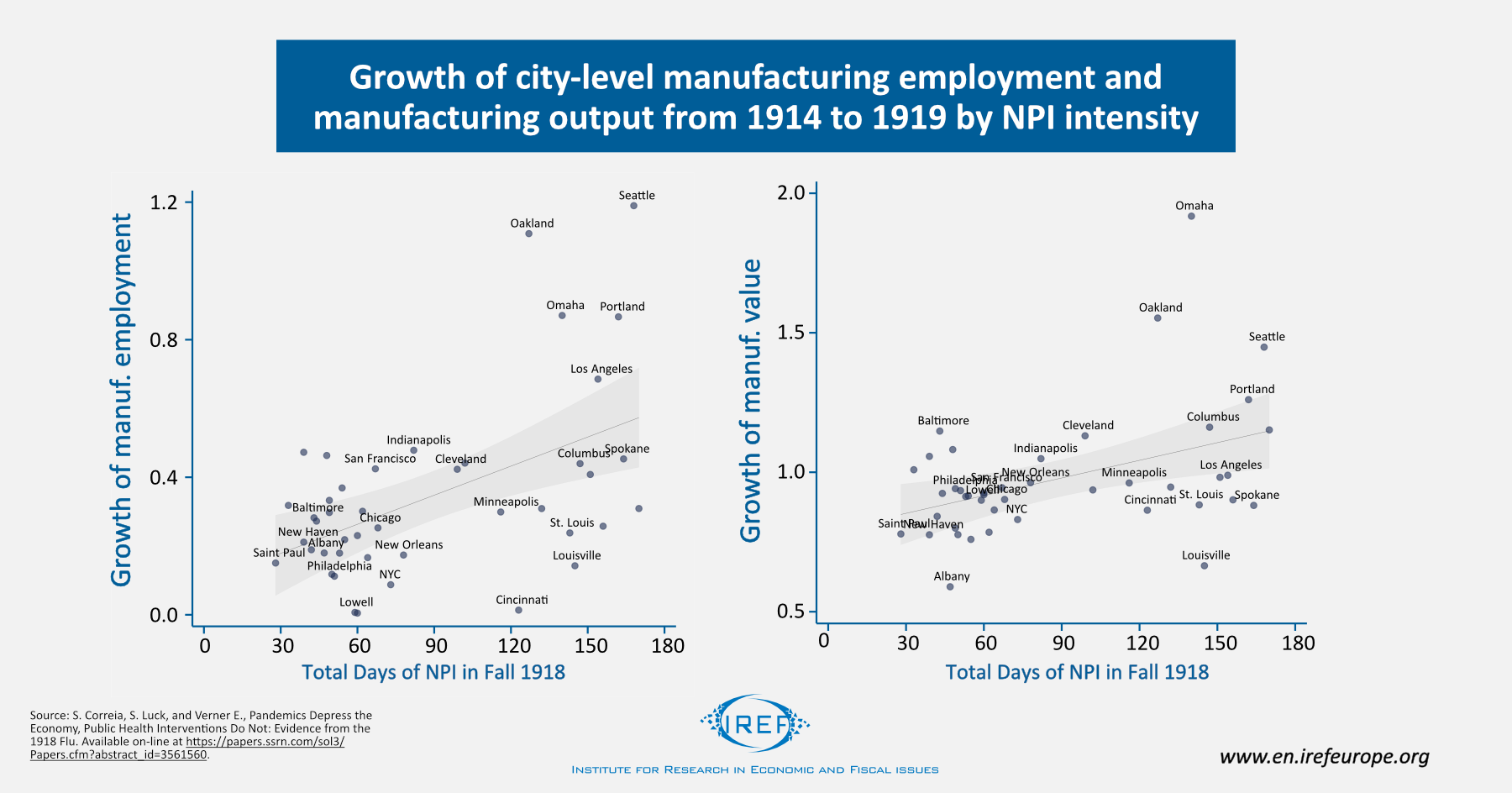 The second lesson, therefore, is that NPIs do not only lower mortality. They can also mitigate the adverse economic impact of the pandemic.

Notice, however, that although highly effective in the short run to contain the pandemic and bring the situation under control, strict lockdown cannot be the long-term strategy. It is therefore necessary to design a more sustainable strategy, based on loosening the lockdown where the exercise of individual responsibility is sufficient to avoid contagion. This strategy certainly requires a high level of cooperation between people and a certain promptness of intervention by the health authorities. But it now appears that this is the shared strategy to reckon with, since the virus will stay with us for a long time. 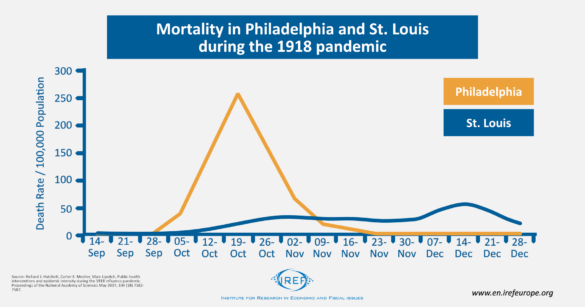 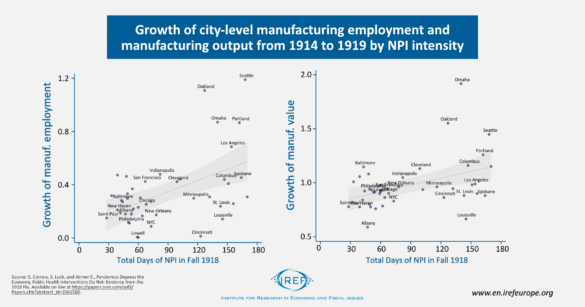