Copyright 2022 IREF Europe
Home » The Eurosystem: a parasite serving only the needs of the Eurozone public sector
Online Articles

The Eurosystem: a parasite serving only the needs of the Eurozone public sector

The European Central Bank (ECB) held its latest Governing Council meeting on 14 April 2022 and issued its normal press release. It also included a facile graphic titled ‘Our monetary policy statement at a glance – April 2022’. In short, nothing of substance has changed despite inflation being in the region of 7-8%, a development laid at the door of Ukraine and therefore requiring no response.

The pattern is that the ECB only responds when an event provides reinforcement for its stance: in 2020 the Pandemic served to legitimize the ECB’s Pandemic Emergency Purchase Programme (the PEPP) and its expansion of Targeted Longer-term refinancing operations (TLTRO) as, without them, inflation might have fallen too far below the 2% per annum stated in the ECB’s mandate.

A circumstance that challenges the ECB’s stance is ignored. For example, its (non-)response to inflation of 5-6% above its target is to lengthen its time horizon for measuring inflation. One hopes this does not mean that, if it can foresee inflation coming down below 2% at the end of that horizon, it will allow itself to do nothing in the meantime. In Cloud Cuckoo Land an ECB with a 10-year horizon could ignore inflation compounding at 8% in years 1 to 9, if it projected inflation of 1.8% in year 10. On Planet Mars an ECB could tolerate damaging inflation of 8% for 5 years as long as equally damaging deflation of 3.8% followed for years 6-10: average inflation would then be on target at 2%.[1] Neither version meets what most people would see as the ECB’s core mandate on Planet Earth: to keep inflation at or below 2% in every single year.

The post-meeting propaganda inferred that the ECB did not understand that these were issues on which it needed to give clarity if it was to retain market confidence. Indeed, many commentators seemed happy to see that the ECB keeps interest rates at a level that deflates the present value of the debts of the Member States, by transferring wealth to them from consumers and businesses. Since these are the taxpayers who meet the Member State debt service anyway, it sounds like pointless round-tripping, and a zero-sum game.

The ECB believes that the Member State bond yields must remain near zero and to this end open market operations will continue to buy up Member State bonds. Although the new net purchases into the PEPP will now cease, the ECB Executive can still have the PEPP buy the new issues and transfer them into the Public Sector Purchase Programme as soon as they count as secondary, and without market-testing the transfer price. Moreover, the ECB can always line up friendly investors like the EIB or the ESM to perform this bridging role if the PEPP is for the time being full.

All this is being done with little concern for the quality of the assets being bought.

Guideline (EU) 2021/975 prolonged the relaxed credit standards for all Eurosystem operations that were introduced as a temporary measure when the PEPP was established in April 2020.[2] They have now been prolonged twice, and will expire on 30 June 2022.

The ECB’s statements make no mention of important issues. If the objective really is Member State debt deflation, who will bear the increasing cost of that and through what mechanism, given the present rate of inflation? How do the primary and secondary bond markets continue to operate? Who will want to buy new Member State debt yielding 0% unless they have been assured that the Asset Purchase Programme (APP) will take it off them without a loss? Who would willingly invest in this debt over and above their obligatory holdings? What happens to the bonds of other borrowers, if there are any? Do two parallel markets develop – one of Eurosystem-eligible bonds yielding below 1%, and another of ineligible ones yielding above inflation? Or does the ineligible market get squeezed out of existence?

The ECB’s policies may perhaps succeed in making Member State debts smaller in real terms but at the risk of embedding a financial system with no relationship to the real world. The Eurosystem gets to own more and more of Member State bond supply, so the pain of receiving sub-market yields falls initially on the Eurosystem itself. But the burden will eventually pass on to the banks via low rates on Minimum Reserves, and the banks pass it on to savers and investors (negative real interest rate of 8-9%).

One can already observe this in action by looking at the February 2022 Eurosystem data compared to 2020 GDP figures from Eurostat: 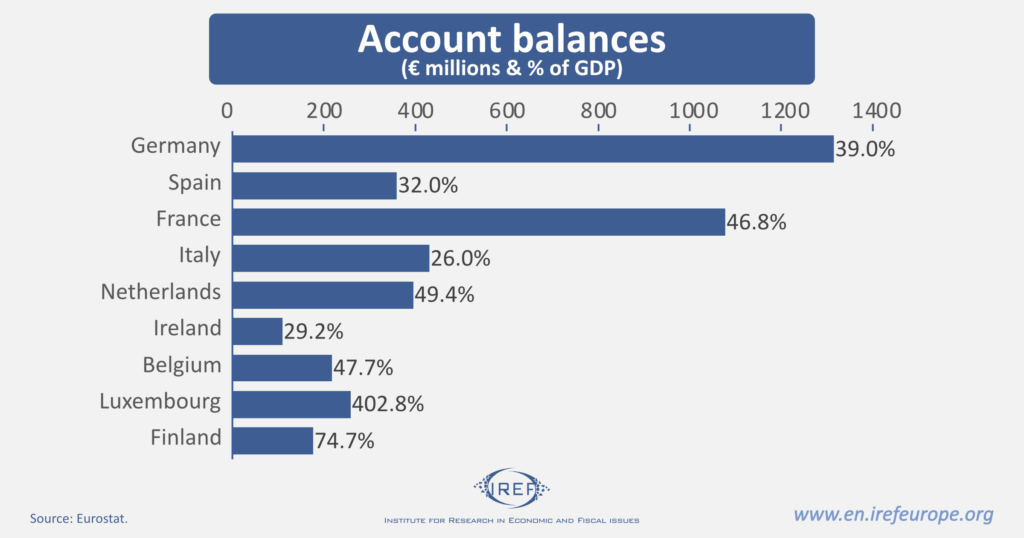 The account balances – mainly consisting of banks’ Minimum Reserves – represent a very high percentage of GDP: what purpose do such high reserves serve as regards the operation of the banking system itself? Are the reserve levels not just being set at these levels in order to extract from banks the mass of money through which the ECB can transmit its cross-subsidization policies? The annual inflation tax on deposits has the same effect below-the-line as extra taxes above-the-line: it falls on consumers and businesses directly or – in the case of Luxembourg – indirectly through the investment funds in which they hold their savings and pensions.

What kind of financial market is that? It is a covert taxation system, with a primary aim of avoiding a Member State debt default. How does a capitalist or even a social market economy survive with such a parasitical financial system serving only the needs of its public sector?