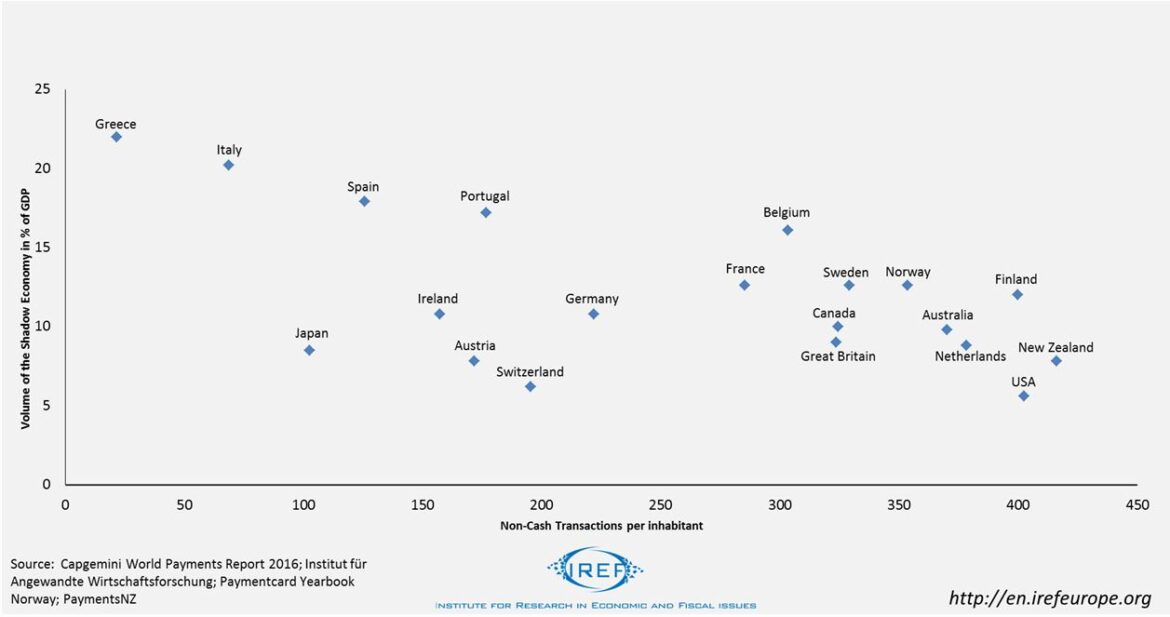 Governments around the globe are trying to limit the use of cash by their citizens. Most European countries already implemented upper limits for the amount of cash that can be used for payments. The German government is currently considering prohibiting citizens from paying bills of more than 5,000 Euros in cash. Proponents regard restrictions on cash usage as an effective means for fighting crime. Critics, however, are worried about a general cash ban in the long run, since it is easier for governments to track electronic transactions of its citizens, who in the future will not be able anymore to protect their electronically stored money from negative interest rates or Bail-Ins by storing it as cash. Statements of prominent politicians, scientists and influential lobbying groups show that these worries are not unfounded.

Empirical studies suggest that restricting the usage of cash actually lowers crime rates – both, street crime as well as organised crime. Such benefits, however, do not justify a general cash ban, as the loss of the advantages of cash would cause costs: cash offers protection from undesired invasions of privacy, from Bail-Ins in the wake of bank rescues and from financial repressions in the form of negative interest rates. Crime should therefore be tackled by using alternative measures, which do not entail the risk of curtailment of privacy protection and increased financial repressions.

Is a Cash Ban looming?
The role cash plays in the private and business life is heterogeneous among industrialised western countries. An example for an almost cash free society can be found in Sweden, where a mix of subsidies for innovative electronical transaction practices, government bans and social trends almost eliminated cash. In Germany, on the other hand, there is a strong tradition of using cash, although acceptance of electronical transaction systems and electronical stores of value increases.

Upper limits for paying bills in cash are already in place in many European countries. The respective limits reach from 1,000 Euros (Italy and Portugal) to 15,000 Euros (Poland and Croatia). In Germany there are no limits on the maximum amount allowed for paying bills in cash, though treasury secretary Schäuble said he is planing to introduce an upper limit of 5,000 Euros. In the crisis-ridden state of Cyprus, citizens were allowed to withdraw only up to 100 Euros per day from their accounts. In May 2016, the ECB decided to remove the 500 Euro notes.

Despite the heterogeneous starting position, the industrial western nations seem to follow a common trend: Policy makers are incresingly restricting the usage of cash as a legal payment method.

Cash and Petty Crime: More Cash, more Crime
Representatives from politics and the judicial system pledge that restricting usage of cash will reduce petty crime. A popular slogan in Sweden goes: “Only your grandmother needs cash – and bank robbers”. Empirical studies support the assumption: By changing to electronically transferred social benefits in Missouri, the crime rate in neighbourhoods dominated primarily by recipients of social benefits was reduced by about 10%. A study including 49 countries found that wider distribution of electronical payment methods substiantially reduces crime rates. Earlier studies showed that higher crime rates result in a reduction of citizens’ demand for cash – presumably because electronical payment methods are perceived as less risky.

Cash and the Shadow Economy: Mixed Evidence
Besides the effects on street crimes, proponents of cash restrictions pledge a reduction of forms of organised crime as they suspect the shadow economy to rely on the usage of cash. Experts’ opinions on the effectiveness of cash restrictions in the fight against organised crime differ substantially and there are no rigorous empirical studies yet.

Banking expert Peter Sands suggests abolishing high denominated notes such as the 200€ note as they are primarily used for illegal purposes while providing no advantages for law abiding citizens. A study ordered by MasterCard and EY estimates the effect different measures for restricting cash have on the shadow economy and finds that upper limits for cash payments could substantially reduce the volume of shadow markets. The Cost of Cash study estimates that by restricting or banning cash the overall revenue of drug trading, illegal gambling, human trafficking and white-collar crime in Germany could be reduced by more than one billion Euros.

Shadow economy expert Friedrich Schneider, on the other hand, thinks that a cash ban would reduce the volume of the shadow economy in Germany by only 1% since both, organised crime as well as terrorism barely profit from using cash. 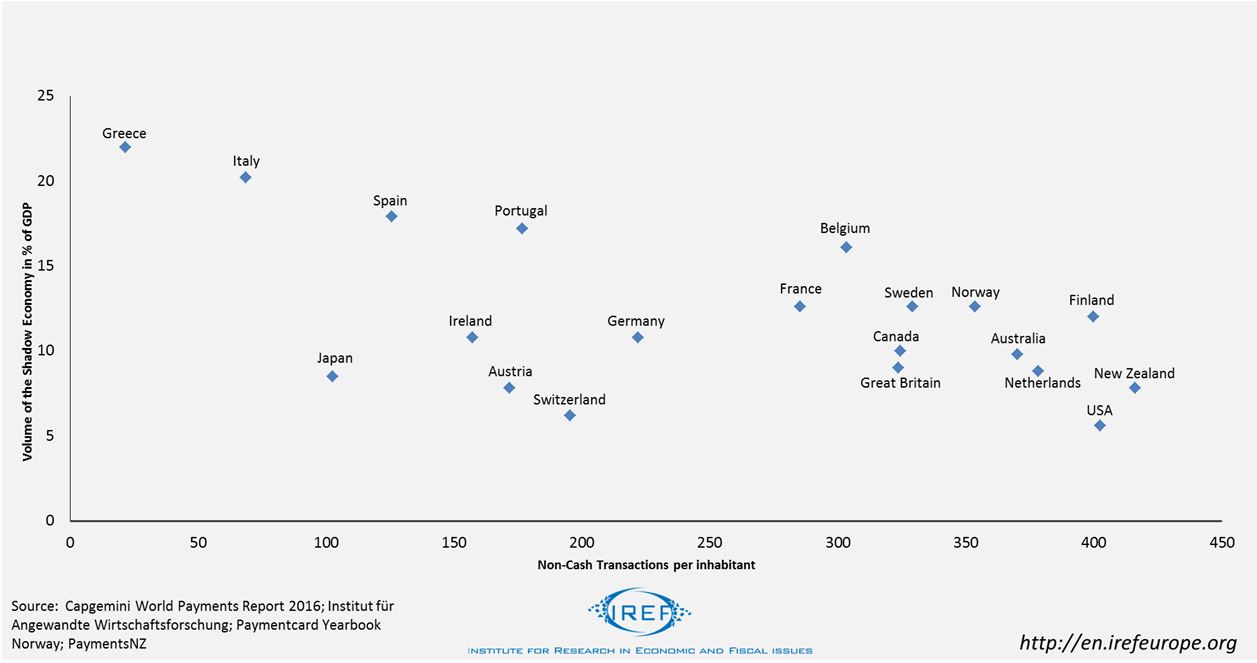 Cash has Advantages for Citizens
Even though empirical studies indicate that a restriction of cash payments may reduce crime rates, the high costs of such measures should not be ignored. Despite all innovations in the field of electronical payment systems the availability of cash still holds several important advantages for citizens.

Conventional as well as innovative electronical payment and storage systems offer only limited protection from an erosion of data privacy by the state relative to cash since electronical payment transactions are usually stored in a digital and centralised manner and are therefore easily traceable. An easy traceability of criminal transactions is desirable – the financially transparent citizen is not.

Cash also offers protection against financial repression. In times of high government debt piles central banks are tempted to push interest rates close to or even below zero. Negative interest rates can, however, be avoided by citizens as long as they can withdraw electronical deposits in cash without any restrictions. The same is true for wealth taxes, capital controls and participations of depositors in bank rescues – those can hardly be avoided if the conversion from demand deposits into cash is inhibited.

Using Alternative Measures for Fighting Crime
In light of the high risks for citizens arising from cash restrictions such measures cannot be justified by pointing to the reduction in crime rates. At most, certain reforms such as the mentioned switch to electronically paid social benefits in Missouri can be justified.

There are many other options for the state to fight crime, which do not erode data privacy or expose citizens to further financial repression. For example, the legalisation of “victimless” crimes and the provision of additional resources for the public or private security production.

This article is a translation of an original piece published on our German site and available at http://de.irefeurope.org/Kriminalitatsbekampfung-braucht-kein-Bargeldverbot,a1197 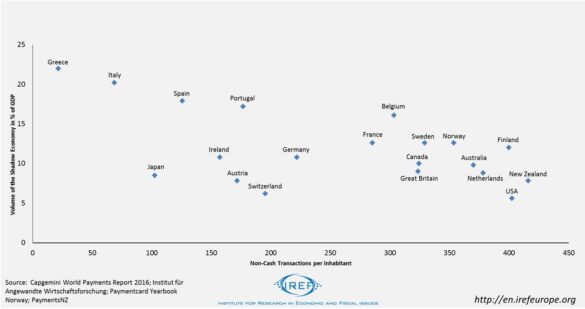