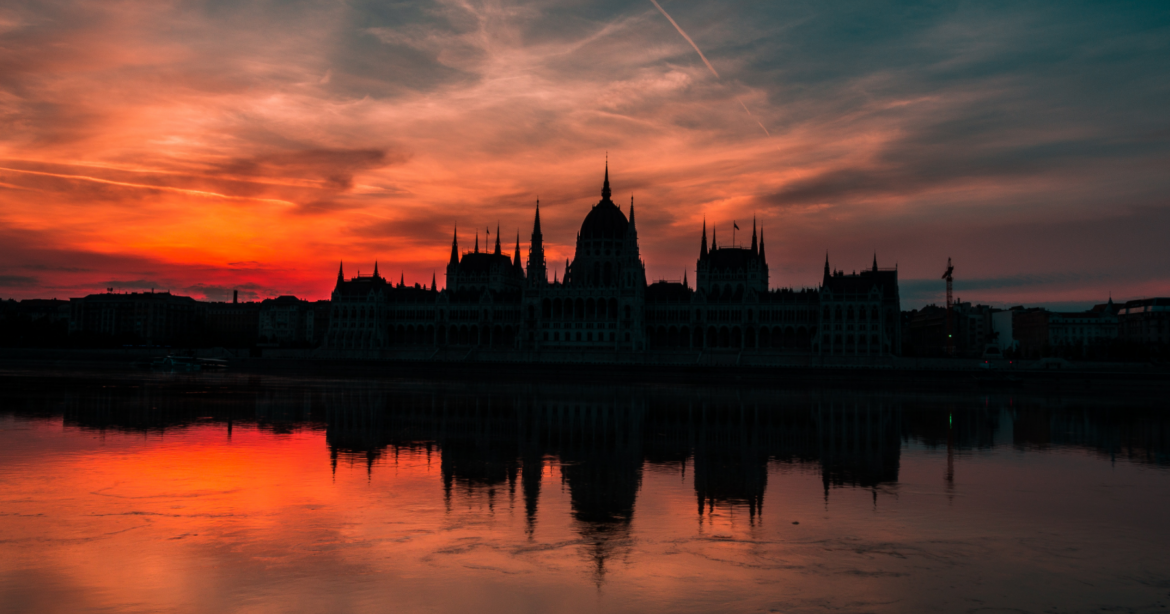 While all of the former socialist economies have liberalised and strengthened their markets over the past two decades, they have failed to strengthen the rule of law (see Table 1). Under socialism, legal systems are not designed to protect the rights of individuals. Instead, they serve the interests of the political elite. To that end, judges, prosecutors, and other judicial officials are trained and expected to cater to those interests. Most worrisome, some of the former socialist economies have even seen the weakening of the rule of law in the last few years.

In mid-June, hundreds of thousands of Czechs took to the streets of Prague calling for the resignation of Prime Minister Andrej Babiš in light of both a criminal investigation in the Czech Republic over alleged fraud, and an EU investigation over the abuse of EU funds by his Agrofert conglomerate. Although the police in the Czech Republic recommended that Mr. Babiš be taken to court to face charges of misusing subsidies from the European Union, only the state’s prosecutor can file charges. However, it is unlikely that this will occur due to the existing political ties between Prime Minister and the recently appointed minister of justice Marie Benešová. In fact, many Czechs find Mr. Babiš is using the government to provide a legal cover for himself. In response, Mr. Babiš pleads innocent, and alleges corrupt practices on the part of the Transparency International and political agenda behind the reporting of the Czech journalists. 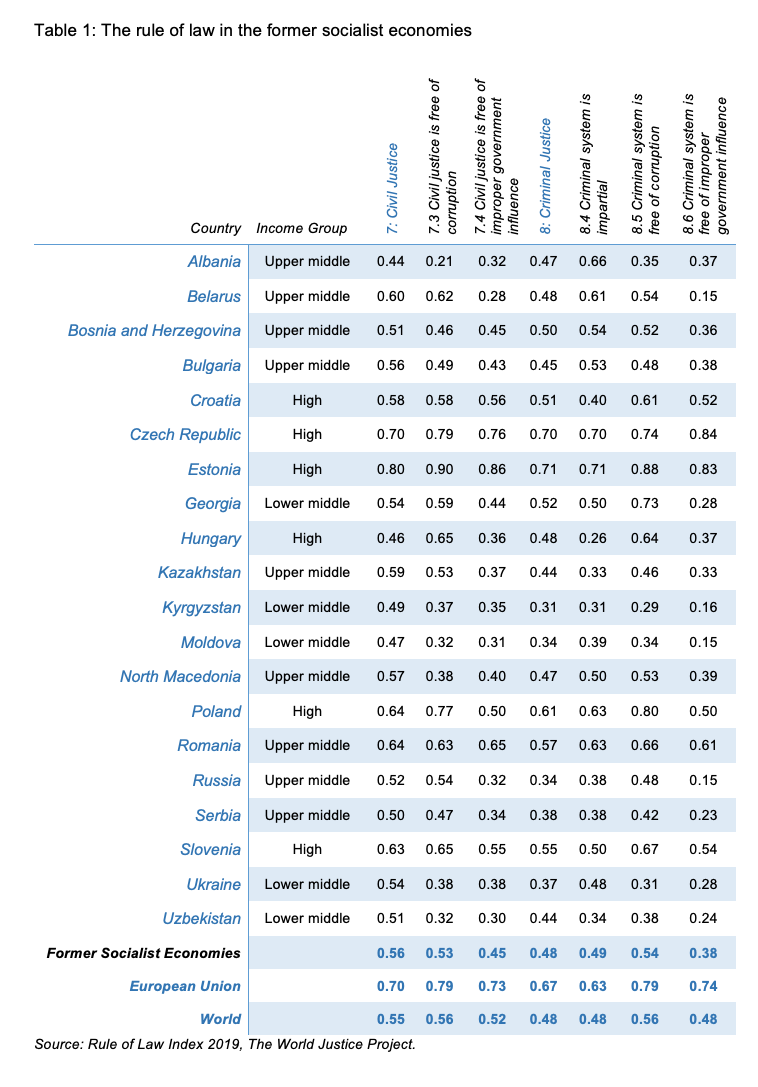 In 2011, Hungary’s prime minister Viktor Orbán’s ruling party (Fidesz), holding a two-thirds parliamentary majority, passed a new constitution that reduced the power of the Constitutional Court to strike down legislation. Moreover, it increased the number of the Constitutional Court Justices, to make room for new members loyal to Fidesz. As Justices over the age of 62 were required to retire, their seats were filled with even more of their loyalists. Late last year, Fidesz also weakened the independence of the court by passing a law that all but established a parallel administrative court system overseen directly by the Minister of Justice. In May, the Hungarian government announced the indefinite suspension of this reform, which would have paved the way for further political interference with the judiciary.

In Poland, the ruling Law and Justice (PiS) party imitated Fidesz by overhauling the country’s judiciary and gave politicians sweeping powers over it. In particular, the PiS-controlled government passed a law that lowered the retirement age of judges of the common courts, public prosecutors, and Supreme Court Justices to 60 for women and 65 for men. The new law on the Supreme Court that followed, imposed a 65-year retirement requirement for both male and female Justices. This meant that 27 of the country’s 72 top judges were expected to step down earlier than planned, to be replaced with appointees of the National Council of the Judiciary, dominated by the PiS party. In addition, as the President of the Republic had the power to extend the period of judges’ active service and the Minister of Justice had the control over the disciplinary proceedings against them, the judiciary has lost its independence and impartiality, and become dependent on the executive branch. Amid public protests and international pressure, the Polish government eventually scrapped the law and reinstated the judges who had been forced into early retirement.

While in Hungary and Poland the government is run by the conservatives, in Romania the ruling party is the Social Democratic Party (PSD), which also does its best to undermine the rule of law by chipping away the judiciary’s independence. For example, the Minister of Justice has been authorized to influence judicial appointments and change Romania’s criminal procedure code. As a result, prosecutors find new obstacles in their investigations. Earlier this year, the PSD also passed an emergency law that reduced the sanctions against corrupted politicians. The PSD leader Liviu Dragnea was one of the beneficiaries. President Klaus Iohannis fought against this law, took it to the Constitutional Court, and called a referendum on judicial reforms. That power struggle came to an end last month, when the Romanians voted in a non-binding referendum against the emergency law, and Mr. Dragnea was sent to prison for three-and-a-half years after the Supreme Court upheld a graft conviction. Romanian Prime Minister Viorica Dăncilă now declares that she plans to abandon these judicial reforms introduced in early 2019.

To conclude, authoritarianism is growing in many former socialist economies. Most notably, the ruling parties try to reduce impartiality and independence of the judiciary. As James Madison stated in Federalist No. 10,

“to secure the public good and private rights, […] the majority […] must be rendered, by their number and local situation, unable to concert and carry into effect schemes of oppression.”

The future will tell whether the rule of law and the institutions will withstand the attacks.

Photo by Daniel Olah on Unsplash 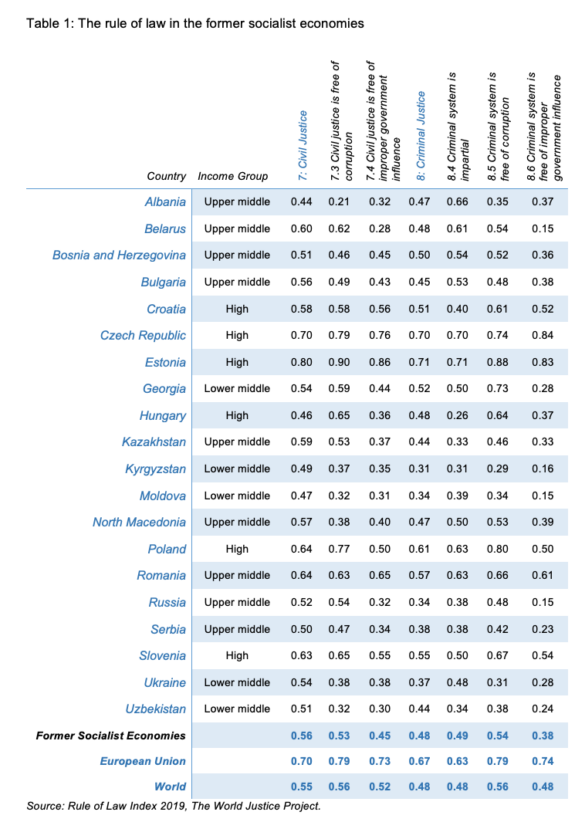