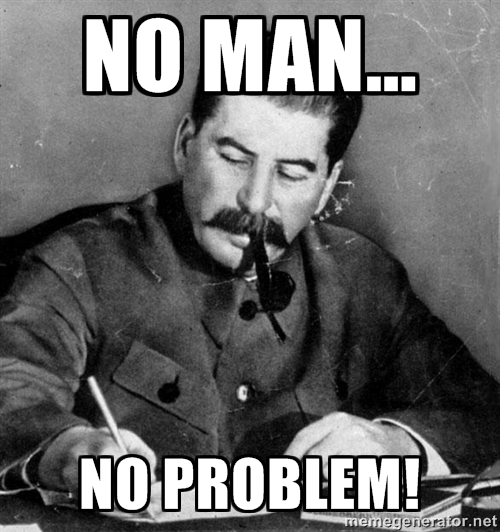 Stalin said: No man – no problem.
EU governments’ tax policies are following suit. Shifting taxes onto a man who does not (yet) exist is one way of solving problems. Are governments also subtly changing existing taxes into less visible ones? Is this a more humane form of “No man protesting – no problem”? IREF investigates.

Although tax increases may have slowed down in recent years in the EU, government spending certainly has not and hence government debts are now at unprecedented levels. And so is the under-funding of pension funds. Both actual debt and implicit pension debt are nothing other than taxes imposed on future, as yet unborn generations. We have illustrated here that taxes (as a proportion of GDP) are not decreasing, and argued that the fake “competition” which hides debt behind stagnating taxes is dangerous.

However, such fake tax competition is only one way of making taxes less visible. True, taxes paid by our children are an ideal case of completely invisible taxes. But what about taxes that currently do get paid, do they come in different degrees of salience governments could exploit by shifting the tax burden onto les salient forms?

Just as debt can be visible and invisible (pension underfunding), so can taxes. Those which the majority of the electorate either does not pay, or is not aware of paying, can be considered to have low salience.

There is no official index of visibility of different taxes. But it would not be unreasonable to propose the following working scale, going from very salient to very hidden:

Property taxes – it is one of the few taxes which in most EU countries you actually have to directly make out to the government and is not automatically subtracted from your paycheck or receipt. Whilst not everyone owns taxable property, in Europe only German households had more rented than owned housing in 2007. In most countries more than 70% of households own their home.

Consumption taxes – In Europe these predominantly take the form of a value-added tax (VAT). It is true that it is not as salient as US sales taxes which explicitly get added to labelled prices at the checkout and make people realize, especially if they are buying few items. In Europe we only get a quote for the combined good called “toothbrush plus a contribution towards roads etc.” and we do not know the split. But at least the VAT must be printed on all receipts and there is a hope that someone will look. Secondly – VAT rates tend to be constant over time and exist only in one or two rates, so the chances are people will have heard..

Personal income taxes – on the other hand – often have various rates and a person might not be aware if and when (s)he falls between individual income brackets to change the applicable tax rates. Even in countries that have adopted some form of a single income tax rate the tax burden is muddled because the rules for write-offs and taxable base definitions keep changing constantly, sometimes even more than once per year. Another great stride towards invisibility of income taxes was made, paradoxically, by none other than Milton Friedman who introduced the concept of withholding – and later regretted it. So personal income taxes are not as salient as VAT, and certainly not as salient in the EU as they are in Switzerland, for example, where people tend to be paid gross wages and have to actually make out a cheque to the government on tax day. That hurts, and it is also a part of the reason for Swiss tax rates staying below the EU.

Corporate taxes – most people are not accountants or business owners so they are unlikely to know their country’s corporate tax rate. No payer – no opposition.

Social security – in many countries it is not even considered a tax and therefore not included in official promotional materials towards foreign investors.

Payroll tax – most people are not even aware that there is such thing, let alone knowing the rate.

If the hypothesis is right that governments are trying to lay on tax on the least salient forms, we would expect less visible taxes to increase more. Do they?

One way of comparing how employment of different kinds of taxes changes over time would be to look at how their respective tax rates change over time. But that will give a very blurred picture because tax bases to which taxes are applied (and exemptions) are constantly redefined. 10% rate today is totally different from 10% rate 50 years ago.

Another way would be to look at total tax yields from the respective taxes. This at least would combine the effects of re-basing and re-rating. It would additionally need to account for inflation, economy size and the constant underlying upward drift of total tax revenue, by means of measuring tax share as a percentage of GDP. The resulting picture would still be biased because the same yield change mean much more dramatic changes for generally low-yielding taxes than high ones.

So what we need to do is to calculate the proportional changes in tax shares in GDP. The following figure shows relative changes in various taxes’ share in GDP compared to the 1965 base. If a tax type stands at 50% in 1985, it means that its “importance” (measured by its GDP share) has grown by a half over the twenty years. 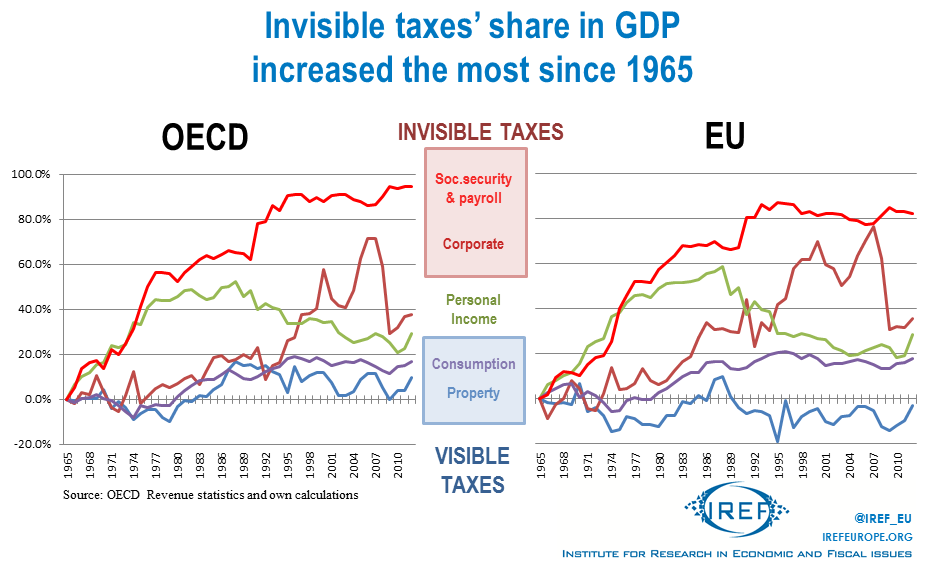 We clearly see that business taxation (payroll and corporate) actually increases the most, both in OECD and in EU. 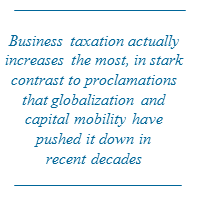 This is in stark contrast to proclamations that globalization and capital mobility have pushed it down. Social security and payroll are now almost twice as important in governments’ tax revenues as they used to be fifty years ago.

Both OECD and EU figures also reveal the great sensitivity of corporate tax to economic cycle, especially to the latest trough of 2008+.

Very interesting is the juxtaposition of personal and corporate taxes. To repeat, other things being equal, economic theory would predict the opposite trend: since mobility of capital outstrips labour mobility, we would expect governments to be increasingly reliant on labour taxation (because it cannot run away) instead of capital taxation (which can run). Whilst labour taxes do yield a greater total yield, their importance in the overall tax revenues has been decreasing (since the ‘80s) while the importance of capital taxes has been increasing.

The Importance of Being Invisible 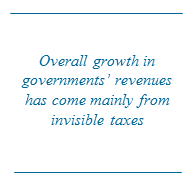 What’s going on? Well, their relative visibilities may help to explain at least a part of this paradox. It may have become increasingly difficult to tax capital – but because it is largely invisible to the majority of the electorate, it is a politically cheap to increase its reliance on it. Overall we see that while visible taxes have been hovering at less than 20% cumulative increase, the overall growth in governments’ revenues over the past fifty years has come mainly from increasing importance of invisible taxes.

Can anything be done? Yes, we can!

If the “humane Stalin” is right and “no protesting man – no problem”, then let us shave off some of our ignorance of tax levels; let us turn invisible taxes to visible ones. Our figures indicate that future favours those who will not give in to being taken advantage of through invisible taxes and who will recognize them for what they are. Taxes.

Helping along this path is, after all, also IREF’s mission.

Invisible taxes' share in GDP increased the most since 1965 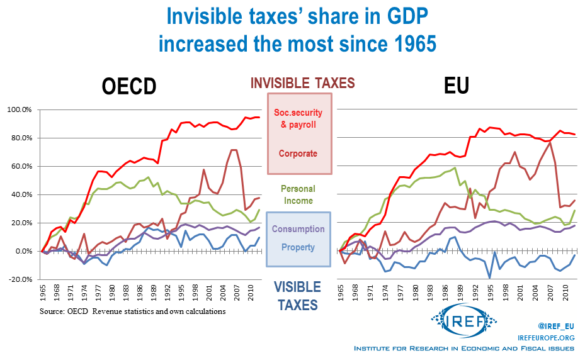 Radical policy
So I guess we need a Taxtalin: someone who would actually wipe out the taxes rather than just making them invisible..