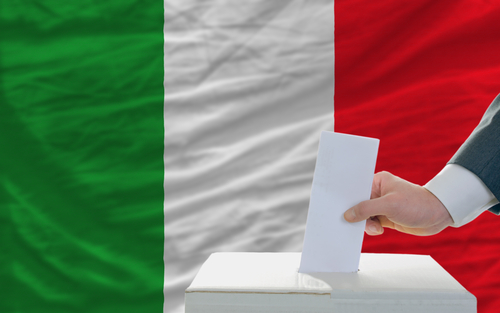 Italian general elections will be held on March the 4th, and these weeks will be remembered as a time when promises abound and all Italians are assured that from March on they will bask in eternal happiness. This is great news for Italians, after all what they suffered during the past years: no growth, a large public debt (133% of GDP) and heavy debt servicing (some 4% of the GDP are spent on interests).

Indeed, politicians do not seem to care about public debt, and promise spectacular tax cuts and/or further increases in public spending.

In truth, this sounds familiar. In 1994, Mr. Berlusconi won the general elections thanks to the promise of a new Italian miracle. Regrettably, no miracle has materialised, and it is unlikely that one will come about in the immediate future. However, political parties are still confident that they can attract voters by promising just that.

The Italian economic situation in four graphs
Figure 1 below shows the growth of the Italian per capita GDP at current prices in the last fifteen years (panel a). The bold line represents the overall Italian situation. The thin lines depict the development of the GDP in each of the Italian macro areas. The picture is far from exciting. 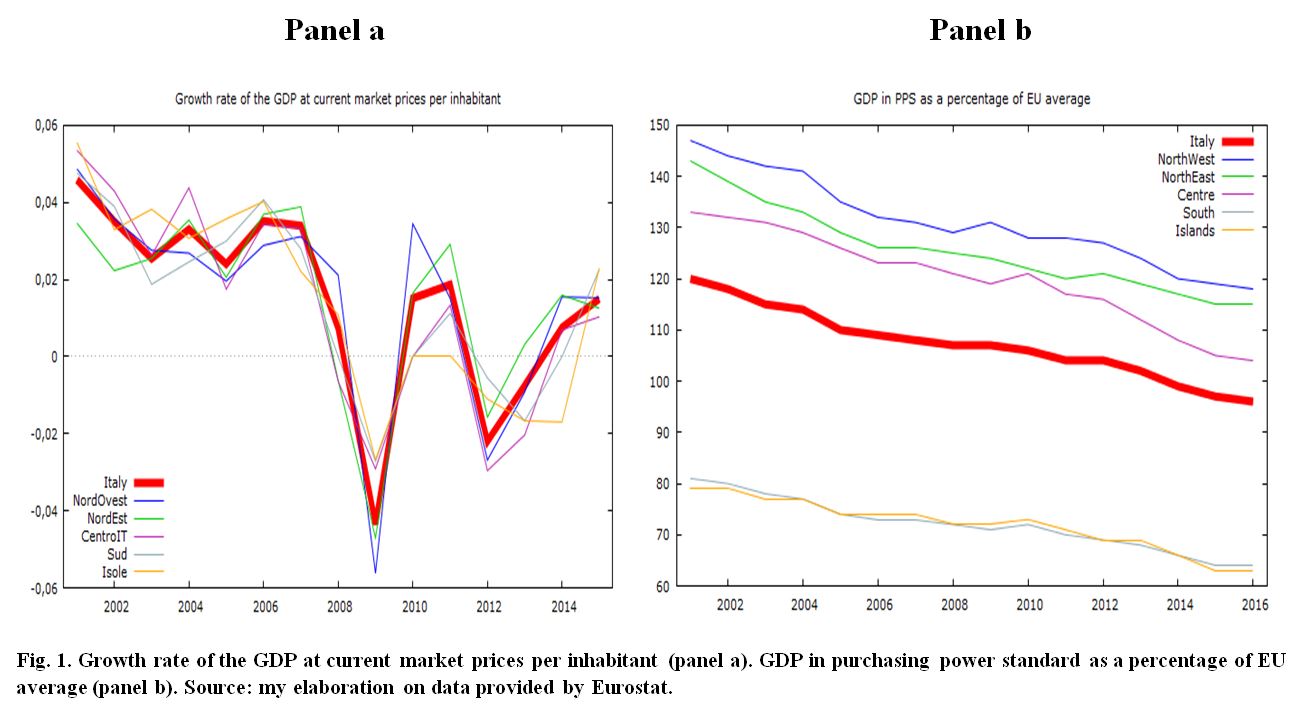 This is even more evident if one considers that before the first economic downturn, the inflation rate (as measured by the Consumer Price Index) was positive and nearly always above 2%, so that the observed GDP growth is mainly an illusion due to an increase in prices.

The Italian economic decline appears even more clearly in panel b, which shows the dynamics of the Italian GDP as a percentage of the EU average: decline is ubiquitous, and not limited to the Southern regions of the country.

Leaving aside the labor market, traditionally characterized by low participation rates and very high unemployment rates – especially among the youngest – the other side of the lethargy affecting the Italian economy has been an increasing pressure on the public budget. Figure 2 below shows government revenues and expenditures (panel a) as well as the growth of public debt since 2007 as a percentage of GDP (panel b). 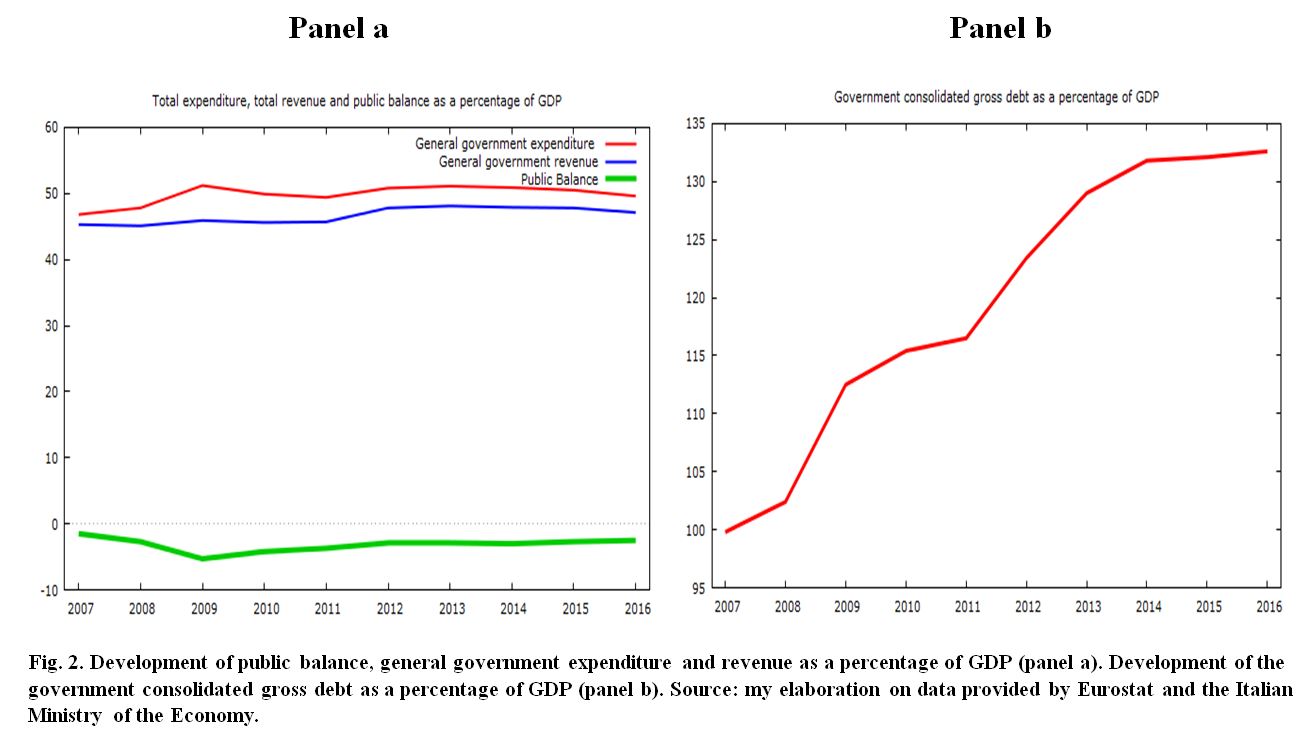 One can easily observe the spectacular rise in the government debt ratio (+30%) associated with a 5 GDP-points increase in the weight of government spending between 2007 and 2013, only partially offset by an increase in government revenues de facto imposed by the European Union. As a consequence, fiscal pressure is now about 43% (some would argue that the real figure is actually higher), a level considered too high by any honest observer of the Italian situation.

Electoral Promises
Both the Lega Nord (the Northern League) and the Movimento 5 Stelle (the Five Star Movement) have been gaining popularity by criticising the enormous waste of public resources caused by a scandalously corrupt class of politicians. Reports about systematic misbehavior are often spiced with plenty of anecdotal evidence about the greed characterizing a political and bureaucratic elite whose only aim is milking the system.

Normally, one would have expected that these two parties would spell out how they plan to cut government spending and eliminate privileges. Although the programme presented by the Movimento 5 stelle promises a substantial reduction of tax pressure, it does not specify the details, and makes generic announcements regarding their commitment to reduce tax evasion and ”rationalize” public expenditure. Moreover, it is unclear whether the promise of a substantial reduction of tax pressure is consistent with the proposed basic monthly subsidy of at least 1,560 euro per (a three-person) low-income household, at a total cost of 30 billion euro.

By contrast, the Lega Nord argues in favour of a 15% flat income tax, while Mr Berlusconi proposal of a 23% flat tax comes with a subsidy designed to ensure that all households have a minimum monthly income of 1,000 euro. Certainly, both proposals would involve a dramatic increase in the budget deficit.

Oddly enough, Mr Renzi’s Partito Democratico is finding it difficult to match its rivals. Its battle horse is the removal of the tax on TV ownership, a tax that Italians deeply dislike. Yet, this promise appears to be less effective than the miracles announced by Renzi’s rivals.

EU rules and Quantitative Easing
To conclude, it is apparent that all the promises mentioned above neglect the actual dire conditions of the Italian economy. It is not just a matter of asking the EU to turn a blind eye on some of its rules and allow weak countries to increase the size of their government deficit. In this light, the Northern League’s proposal to renegotiate the rules of EU membership and the flaky position of the Movimento 5 Stelle on a possible EU opt-out referendum do not bode well, and open the door to the perspective of quitting the euro and engaging in debt monetization.

The current imbalances and weaknesses of the Italian economy have little to do with the EU rules of the game. Rather, they are the outcome of mismanagement by the Italian policymakers. Not surprisingly, the end of quantitative easing might coincide with the beginning of real troubles. 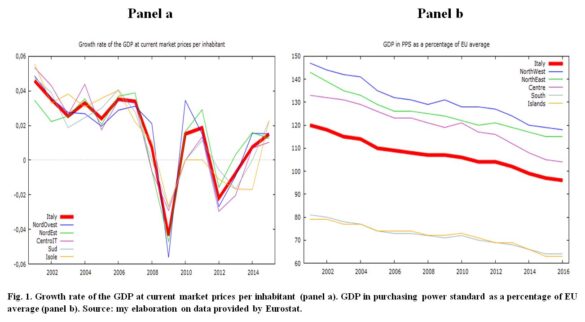 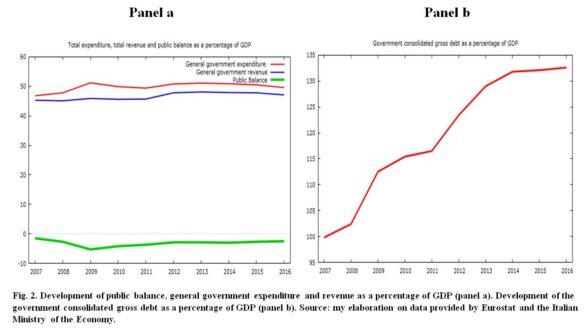 The Looming Crisis in the Private Provision of Public Services