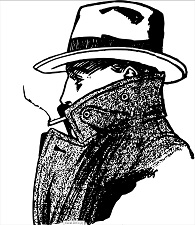 If you are playing for time, you have to swamp your creditors with proposals how you are going to improve. “This time it’ll work, honest, guv.” So the Greek government is now proposing a secret tax police, where ordinary citizens would be wired with cameras and microphones to catch tax evaders. It’s a terrible idea, especially when there are easier alternatives.

When the Greeks elected a coalition of a few communist and far-left groups to the government this winter, commentators expected many unfunded social programmes, reinstatement of lavish labour market conditions and state employment, and general hostility to creditors’ bailout programmes. What few expected, however, is that the communists would actually propose a truly Orwellian world of citizens (and even foreign tourists) spying on each other secretly in an attempt to catch someone not giving out.

As part of yet another package of promised policies, at the end of last week the Greek government suggested in a letter to the Eurozone authorities that it would fight tax evasion by using members of the general public as secret tax inspectors. It would actually wire them with hidden cameras and microphones in order to gather evidence to prosecute. In popular seaside resorts, even tourists would be used for such purposes. All such secret agents would be employed on a short-term basis, presumably to limit the chances of being “uncovered”.

If the reason for Greeks not paying their VAT were indeed their ability to facially recognise a tax inspector coming towards them and perhaps even to warn each other of the impending inspection, this plan may perhaps have a chance of working.
However, the reasons for low tax-compliance are much deeper in Greece. And there are more reasonable alternative methods of increasing compliance that Mr. Varoufakis could have promised in his letter.

What alternatives are available for increasing compliance?

Tax compliance alone isn’t really the key to solving the Greek crisis. The government is in trouble because of years of profligacy and mismanagement, not because people are evading taxes. The economy is in trouble not because of debt repayments, but because it is difficult to retain competitiveness of a “Greek style” economy when its currency is tied to the strong German currency through the Euro. However, for the sake of the argument, suppose the government wanted to increase (VAT) tax compliance. What are some more sensible alternatives to a tax police?

• Increased penalty. An individual’s decision to avoid tax depends on a second parameter, too: not just the probability of getting caught, but also the punishment if caught. The Greek proposition does nothing to this second parameter, yet rich economic research shows that it can be a much more effective (and cheaper!) way of deterring crime in general, and tax avoidance in particular. Just punish more the evaders you do catch!

• Lottery. The government can create a lottery. “Send in 20 shop receipts to the government and get a lottery ticket to win, say, a car.” Then the government can check these receipts against the seller’s tax records, and transactions will have a higher chance of being recorded and taxed. Receipt lotteries are surprisingly frequent. They are currently used (or being introduced) in a range of European countries, both in the EU – Hungary, Romania, Slovakia, Portugal or Croatia – and outside, e.g. Albania or Macedonia. This follows on previous wealth of experience with receipt lotteries elsewhere, e.g. in Chile (where it accompanied the introduction of VAT in the 1980s). In Taiwan, tax receipt lottery has been running since 1951; in the first year of operation it boosted tax revenue by 75%! The European ones (introduced especially in low tax honesty countries in the last two years) have generally resulted in much smaller extra yields (a handful of % at most), but they would certainly work as a much more sensible signal by the Greeks (especially since they did consider introducing it in the past).

• Fiscal decentralization. In deciding whether to pay tax, many spirited tax-payers also consider what their government is actually doing with their taxes. Nobody likes paying taxes, but if you feel that tax revenues will be spent especially inappropriately, you will be even less keen on paying. Decentralising the tax and spending decisions from the centre (Athens) to the regions and especially to the localities gives people a bigger stake in the system, and compliance is generally increased. If you can see a direct link between your tax and how it’s spent on your street, you’ll feel less sorry for paying. As it is, however, the spending decisions of Athens have traditionally been seen as very remote by the majority of Greeks.

• Lower taxes. It may well be that the Greek fiscal system is currently so dysfunctional that a “Laffer effect” can realistically be expected. Increased tax rate isn’t the only way to get more revenue. Higher tax rates discourage reported economic activity, and a lower tax rate can increase it. If what the government gains on the increased reported activity outweighs what it loses on the tax rate, overall tax revenue increases.

Citizens spying on each other at the behest of the state is one of the worst aspects of living in a society suffering under communist rule. Everyone believed that such days are long gone, or at least relegated to few islands like North Korea for the time being. The Greeks voted in a communist government democratically. But let’s hope it wasn’t to get this.