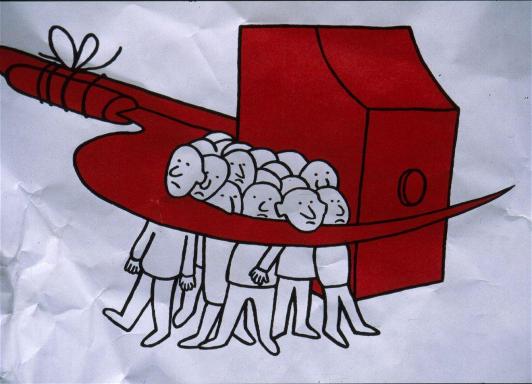 Attacks against wealthy people are still going on in spite of the fact the Welfare-State is plundering taxpayers. In a recently published book, sociologists – I should say ideologists – Michel and Monique Pionçon-Charlot are criticizing those they call “deliquents”. No, wealthy people are not offenders or delinquent. They are above all those who create jobs.

If ever you did not know, “neoliberalism” makes France suffering. This is the conclusion of sociologists Michel and Monique Poinçon-Charlot in their last books which makes the news headlines in France.

Having authored with Jean-Philippe Delosl a book about “wealthy people”, I could remain silent in front too many economic and sociologic absurdities.

First, how is it possibile to talk about “neoliberalism” in a coutnry where public spending is reaching 57,2% of GDP and where social contributions are almost the highest in the world? In a country where there are twice as much civil servants than in Germany? And how it it possible to write that France knew “real progress” betweeen 1981 and 1983 (in 1981, François Mitterand was the first socialist president elected in the 5th Republic) whereas the economy almost collapsed, the French Franc was devaluated, and 1 million workers were unemployed?

The authors are also advocating that capital revenues harm wages. This nonsense, though claimed by politicians from both the right and the left, was several times proved wrong both in France and in OECD countries. Even the Insee – the French statistical agency – showed in 2009 there was no capital revenues growth harming wages. According to the Insee, the average wealth of the wealthiest top 1% is around €4.5 millions. 50% of this wealth is produced by family companies. In the USA, according to the Survey of Consumer Finances, about 74% of the fortune of the top 1% wealthiest is made by “unincorporated business”.

It is as if wealth was the result of a theft. The Pinçon-Charlot should know that the vast majority of these fortunes create thounsands of jobs and pay billion in taxes to the Government. If jobs created by the Fortune 500 are to be counted, the result would be that millions of jobs are reached.

It is an error to state that wealth people do not pay taxes. In France, in 2011, 30% of the top Fortune families paid 87% of taxes on their revenues before deductions and 95% of the net tax. Also, 10% of the wealthiest paid about 70% of the whole income tax.

History shows that heavy taxation on wealth does not increase the amount of money levied through taxes.In 1981, French socialists created a 65% tax along with withholding taxes applied on the wealthiest. The same situation was true in the USA. When a 91% tax rate was applied on revenues in the 1970’s and then a 70% rate, the tax recoveries amounted to 8% GDP. But when these rates were decreased by Ronald Reagan and Bill Clinton, tax levies increased, reaching up to 9.4% of GDP in 1997-2002.

This book «The Violence of the Wealthy» is in the direct line of marxist books written by civil servants who, in the pretense of « social justice », are attacking those they consider wealthy. Thomas Piketty belong to the same trend. These authors are generating more evil than good. They give a new life to the class struggle which made million of deaths in the 20th century. They encourage popular violence against those who are labeled « wealthy ». Then wealthy people become scape-goats as koulaks and jews were in others times. Worse: these ideologists do not know who are the wealthy people today. And their analyzis made only from ideology and not from facts give arguments to the Communist Party and the Front national (extreme right).

It is always easy to fing scape goats especially when the economy is bad. Globalization, the United States, China, wealthy people… Never economic policies thought out by politicians ignorant of economy are questionned. But the truth is that wealthy people are needed since the more wealthy people, the less poor people.

France: A Free-Trader President After Hollande?