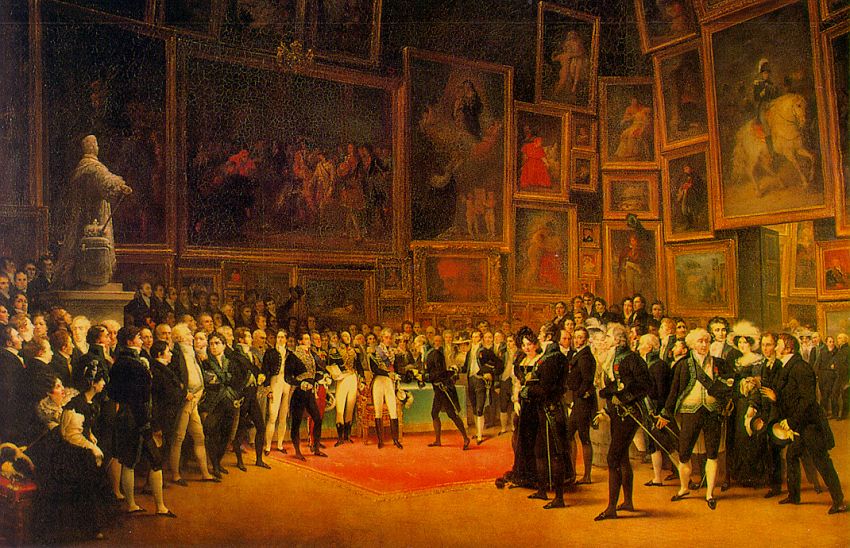 There exists more or less a consensus that the state must promote the arts. This exists even among many who know that state intervention brings market distortions, and it should be clear the arts are no exception. The case of the Salon de Paris, investigated by F. Etro, S. Marchesi and E. Stapanova in “Liberalizing Art: Evidence on the Impressionists at the end of the Paris Salon” offers some perspective on how the arts do not differ from other markets.

The Salon was established in 1667 by Louis XIV, and managed by the Académie Royal de Peinture et de Sculpture, a state agency operating to promote art and arrange official exhibitions. Access was restricted to its members (insiders). Although the Salon survived the French Revolution by changing labels, it remained under state control, and the Ministry of the Interior handed out admissions and awards according to its Plato-like educational purposes: “the government had to support the tradition of monumental history painting, which represented the pride of the French school and could not prosper without public commissions”. There were exceptions, but they were few and far between. During the 1860s, the Impressionists emerged. Their subjects and techniques were not in line with tradition. Not surprisingly, therefore, the Salon rejected impressionist painters systematically. From 1874 to 1878, the Impressionists reacted by organizing concurrent exhibitions, but all ended in disaster. The turning point came in 1879, when the Republican government came to power, and in 1881 it privatised the Salon. New exhibitions saw the light, and by the end of the decade, the Impressionists became widely appreciated.

The paper demonstrates that getting admission to the Salon involved a significant price premium over all the excluded painters, especially the Impressionists. The premium was even higher for the award-winning works. Of course, this would not be surprising if admissions and prizes reflected buyers’ demand, if “taste” rather than power was the driver of both admissions and awards. The authors of the paper argue that admission and awards to specific works affected the market price of the entire production of a painter: little public exposure would cause little market appeal.

Put differently, Etro and his co-authors claim that the privatisation of the Salon caused the convergence between the Impressionists’ prices and the insiders’. Their view is that the Impressionists’ initial commercial flop was entirely due to the barrier to entry erected by the Academy.

The 1881 turning point and the catching up that followed are apparent in the following graph (Figure 2 of the paper, p.28). 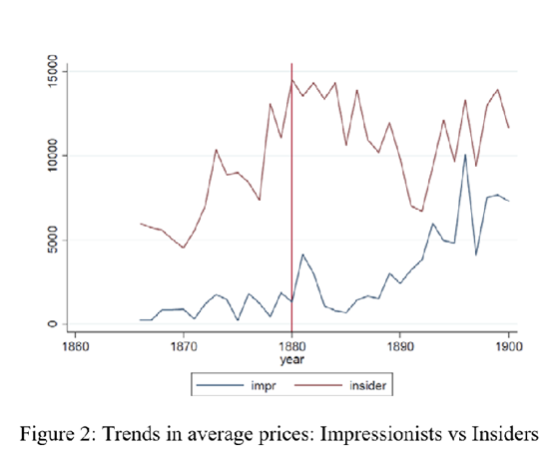 The view presented by the authors is interesting. However, it is not fully convincing. For example, it fails to explain why the competing exhibitions and auctions between 1874 and 1878 ended in failure. Closer investigation into the role of the “official” Salon can shed further light on what happened.

The admission to the pre-1881 Salon was perhaps equivalent to a quality label (something like what we see in today’s haute couture events) that determined tastes. If so, the post-1881 “salons” created a plurality of tastes out of nothing, which enhanced the surge in prices experienced by the Impressionists.

However, we believe that the Salon did not merely certify quality, and that exposure was not enough to drive prices. As a matter of fact, the Salon conveyed a broader set of information:

As a result, the artists rejected by the official aesthetic channel (the Impressionists) fetched relatively low prices. If one takes signalling into account, Impressionist techniques and subjects could even have a negative value.

To summarise, the Impressionists were not ignored because they were excluded from the “official” Salon de Paris. Rather, they suffered from the fact that the regime/state cherished other aesthetic standards, and that the public urged to embrace those standards and show their loyalty to the regime. Public spending supported the prices of the “state-cherished” artworks, adding an economic incentive to invest in academic artists instead of Impressionists. In this context, taste played a minor role. Buyers did not act in accord with tastes, but reacted to the information and incentives they received, and their willingness to conform to power. The regime-change in 1879 involved a new virtue setting, and the subsequent aesthetics-change that emerged through the “1881 liberalisation” made virtue enforcement ineffective. This devalued virtue signalling (there was nothing to signal). Buyers got the message, and prices adjusted accordingly (money moved from academic to Impressionist paintings).

The point we make is state subsidies to specific artists does not influence tastes (competing artists can reach their buyers in other ways). Rather state spending and commissioning reveals what the government wants (loyalty, in this case), and this influences the allocation of resources.

Of course, this lesson goes beyond arts. Consider, for example, intellectuals and journalists ready to align to the incumbent government. This behaviour is not just a matter of showing loyalty per se. It is also a way of legitimising claims to privileges and financial support. Government financing specific TV programs or performers, as well as subsiding newspapers or specific sectors, pushes selected prices and defines the financial return of “alignment”. Government neutrality is possible only if government can neither spend nor create barriers to entry.