“Water Tax”, the Ire of Ireland 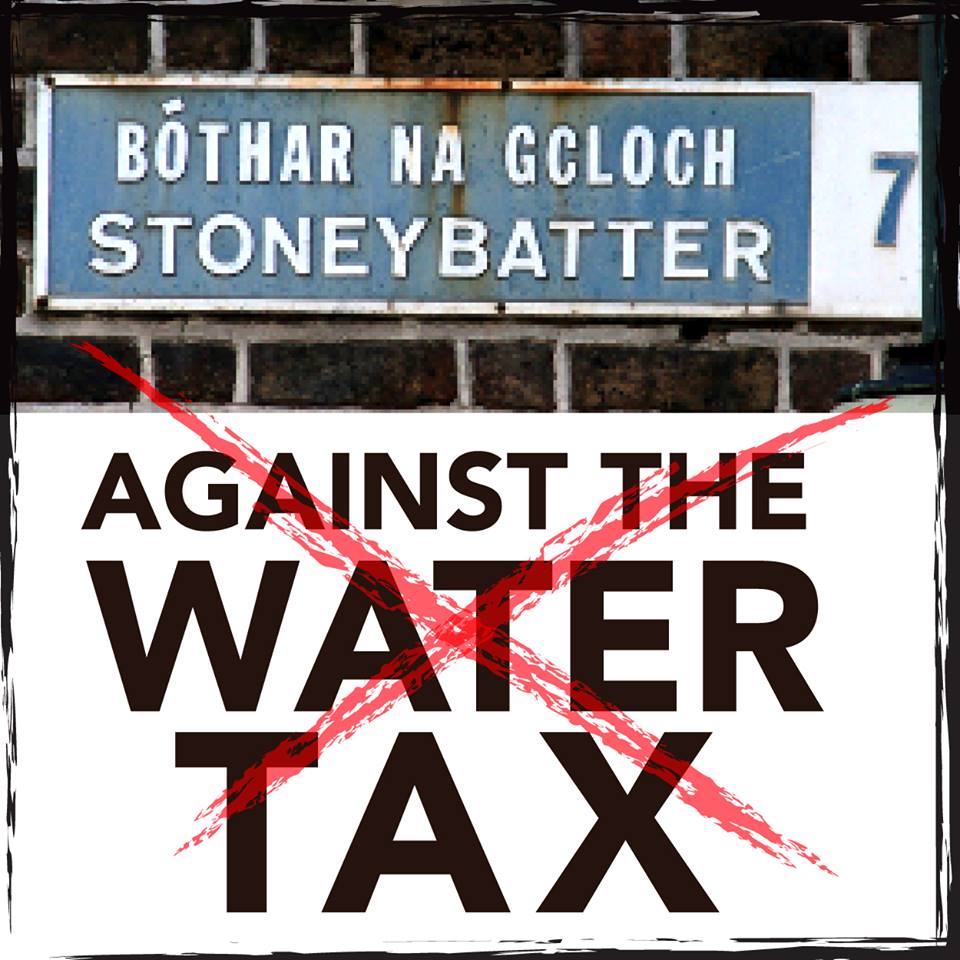 It is becoming a pattern. Another weekend, another 100,000+ protest against a new tax. Only not Hungary and tax on the internet, but Ireland and “tax on water”.
At least that’s how many media are reporting it. ABC runs with the headline “Marchers Protest Ireland’s New Tax on Water Supply“, RT leads with “Ireland Stands Up Against Water Tax”. Protestors’ banners also cite water tax.

IREF shows that what Ireland is actually doing is not introducing a water tax but increasing overall taxation. There are two silver linings. 1) The amount of governmental subsidy (if any) will finally be revealed, and 2) the government will stop encouraging waste of an increasingly precious resource.

Is Ireland about to introduce a water tax?

Ireland is currently the only OECD country that does not have a system of charging customers for water; the costs are entirely borne by the general taxation system.

In all other developed countries, water has a price. It usually is a combination of a fixed monthly “access” charge and a per-volume price on actual water used. Practice differs from country to country and sometimes one charge is missing altogether: in central Europe, for example, most municipalities only charge users a per-volume price.

When water stops being paid for out of general taxation and is charged for explicitly, it is not an imposition of a “water tax”.

Price paid to public authority is not a tax

The Irish government has instituted a public authority (pragmatically named Irish Water) to which customers will pay for water. Some people may still argue that as the new company will remain under government control, it is effectively still a tax.

That is wrong. Taxes are (by definition) payments not linked to any particular government service. They also do not entitle the tax-payer to any goods or services. Here, however, it is a price for a good (water) and service (water delivery) to which the payer is entitled to, upon payment.

Even when sometimes people try to calculate how much of one’s tax goes towards a particular service, it is only an illustration. Generally taxes are collected in one melting pot and the government then decides on how the money is split and – until now in Ireland – how much should go for water provision.

Now the Irish water system will be run as a separate accounting, albeit by a government-controlled company. If the company then still runs a deficit, it will at least be clear how much the government subsidises its people’s water, and this can be debated. In public or at the voting booth.

When someone is not charged the full price of the water they use, someone else needs to make up the shortfall. Such subsidy does not necessarily have to come from tax-payers. Under some water pricing schemes it is other water-payers in the system who subsidise some users’ water.

How much shortfall needs to be subsidized depends on how much waste the pricing system encourages. The more waste, the more cross-subsidy is required.

Fortunately, Ireland is now moving away from the most wasteful system of water provision imaginable.

The infographic below shows a spectrum of water financing systems. Moving from left to right we decrease the variable and increase the fixed components of the final price. The final stage at extreme right represents the current Irish case of no payment for water. The amount of waste generally increases as we move from left to right. 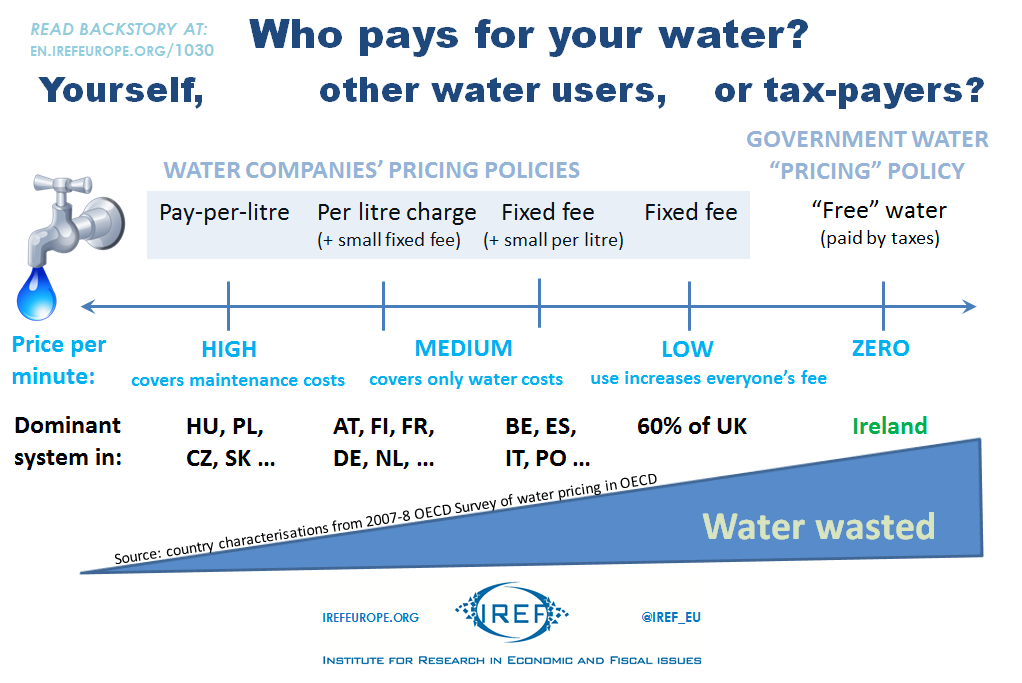 Moving from left to right,
• When you pay for every litre out of your tap, you will not waste them. But the price here must also cover the costs of maintaining the pipes to your potentially remote location. So although you do not waste water, the cost of delivery to you may still be subsidized by those who live close to water sources and are heavy users.

• When you pay a two-part tariff, both for the water you use and a fixed monthly fee for delivery, there is the potential of minimizing the waste. But only if actual prices reflect true costs of the two components. In reality, however, governments do try to introduce some “social” criteria. Companies, for example, although they are often centrally located near everyone else (and therefore impose no remoteness cost), may be required to pay higher fixed rates. In such cases the government dictates a cross-subsidy from one payer to another. It may even be considered a tax since the corporate payer received no additional service (cleaner pipes, for example) for such surcharge.

• When you only pay a fixed fee, you do not have to worry about leaving the tap on, or using it on a wilting garden. Waste ensues just like at any zero price for costly goods. In the UK, for example, most people still do not know what a “water meter” is and the government is now running information campaigns as they are slowly introduced into people’s homes. This may eventually remove the curious phenomenon of “hosepipe bans” during dry seasons, a manifestation of what economists call “tragedy of the commons”. A fixed fee may even produce a psychological spiral. As waste results in an increased fee (compared to what it would be without waste), more customers may then feel “justified” to waste water, “just to get their money’s worth”.

• When customers pay no fee, as has been the case in Ireland, waste is the worst. At least in the British system, the fee can be increased when waste increases overall costs. Neighbours then may, especially in smaller communities, mutually police each other not to use water excessively, preventing rises in their own fees. However, when water (over-)use is paid by the general taxation, nobody will bother policing their neighbours. Overall tax burden in modern economies is so general that nobody will ascribe its increase to water waste.

Current protests are increasing the likelihood that the Irish government will keep the new water price too low for political reasons and subsidies might continue, but at least they would be visible.

Financing water from general taxation is the least effective method of providing water. It encourages waste, spiraling costs, and promulgates the myth that some things can be “free”.

It may not be “water tax”, but it’s still a tax increase

So, now that a whole chunk of government activity has been taken out of general taxation, Irish taxes should fall, right?

Yes, they should. But the government has no such plans. Instead, it is trying to portray water charging as an alternative to a tax-increase.

Phil Hogan, Ireland’s rising EU Commissioner and former Environmental minister, has framed it as just such either-or choice: “It costs €1bn a year to supply water, so we either pay more on income tax …. or we pay as we use.” So allegedly, by introducing the water payments, Ireland is able to avoid a tax rise. But that’s simply wrong, general taxation is about to rise with metering.

Each Irishman and Irishwoman will pay extra for water, and the remaining government services will be provided at a higher tax-cost, augmented by what government used to pay for water and will no longer need to.

So the protestors are wrong to say that there is a new tax on water. There isn’t, they are just joining a more efficient civilized world on that issue. But they are right to talk about taxes; those will effectively rise after the transition.

The fact that generally people do not see this general rise for what it is should make everyone worried. 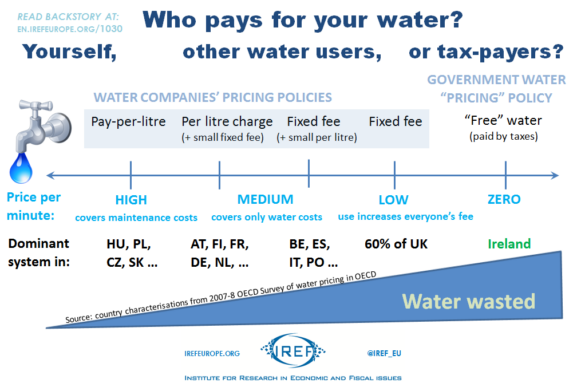