Copyright 2022 IREF Europe
Home » What would be a “living wage” in the EU? The answer may surprise you.
Online Articles 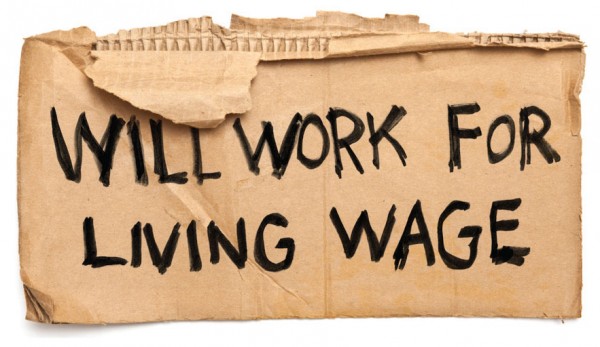 The concept of Living wage is gaining popularity throughout the EU. The social pressure of its advocates probably stands behind the recent proposals to increase substantial minimum wages. Closer scrutiny of the proposed levels of living wages by the IREF reveals, however, that the relationship between Living wages and Minimum wages is quite unexpected.

Good news, everyone, the recession is over, all over the world. How else should one interpret the latest trend of feeding frenzy of very large minimum wage hikes? In the past minimum wage used to increase very gradually, every percentage point was battled over and usually took years to implement. These days it seems that if you are not adding at least a half to your minimum wage, you’re perceived as week.

In a minimum wage poker game, president Obama in the US wants to increase the federal rate to $10.10/hour; not to be outdone, Vermont has just hiked its rate from $8.37 to $10.50 last week. Seattle mayor wants to increase the minimum wage in the city all the way to $15/hour. Will nobody fold? Well, not so much folding as calling the president’s bluff, Oklahoma Governor signed a law that bans municipalities and localities from adopting the president’s minimum wage.

This had been President’s own strategic move: having trouble to pass his 10-10 plan centrally, he called on local authorities to adopt it on the local level. Europe is not far behind, there are plans to increase radically the minimum wage in the UK, to institute one in Germany, and the Swiss have just (unsuccessfully) tried to break the poker jackpot and institute through a referendum the highest minimum wage on the planet.

We have argued that all these unprecedented increases have already left the realm of what used to be called “minimum wage” and entered a new domain of “living wage”, a concept making its rounds especially in the UK and in the US, which aims to guarantee workers “decent living”. But such proposition needs to be tested by comparing the actual “living wage” to the existing “minimum wage”. That’s what we do below.

Living wage EU: how much?

Of course, no two people will ever agree about what level constitutes a living wage, and it naturally differs from place to place even in one country since different costs of living are taken into account. As a result, employers can never be sure whether or not they are complying with the strong contemporary social pressure for a living wage. At least the EU economies are reasonably similar, but what happens when you try – as inevitably happens – to apply the concept universally? It is bound to run into precisely the same definitional difficulties as the never-ending human quest to define poverty: If you define it relatively, as a percentage of the poorest people, you will never get rid of it. If you define it absolutely, by what a poor person must be unable to afford, you will never get an agreement, not just across countries but also within them.

Being doomed from start has never stopped any ambitious plan, however. One such leading project is run by the Wageindicator Foundation which tries to “introduce the concept of a globally comparable living wage that informs on how costly is to lead a decent life in different parts of the world. The living wage estimates calculate the monthly expenses necessary to cover the cost of food, housing and other non-specified discretionary purchases (e.g. telephone, clothing, health care, etc.)”. It collects such data currently for 116 countries in the world. IREF has analysed this data for the EU countries (plus Norway and Switzerland as “interesting” non-members).

Costs that Living wage should cover

The main component of the calculated living wage is the cost of Housing. The two minor, roughly equal categories are Food and Other expenses. Each category is evaluated at the “minimum” and “maximum” of estimate. Therefore the Foundation believes that the living wage for the country should lie somewhere between the sum of minimum costs and the sum of the maximum costs. The size of the gap between the minimum and maximum varies surprisingly much among countries – the minimum is anywhere between 50.5% and 87% of the maximum.
The following two graphs show the minimum and maximum estimates of the three cost categories whose sum makes up the proposed living wage. In each case the countries are ordered according to the final sum of the costs, i.e. from the smallest proposed living wage to the highest. 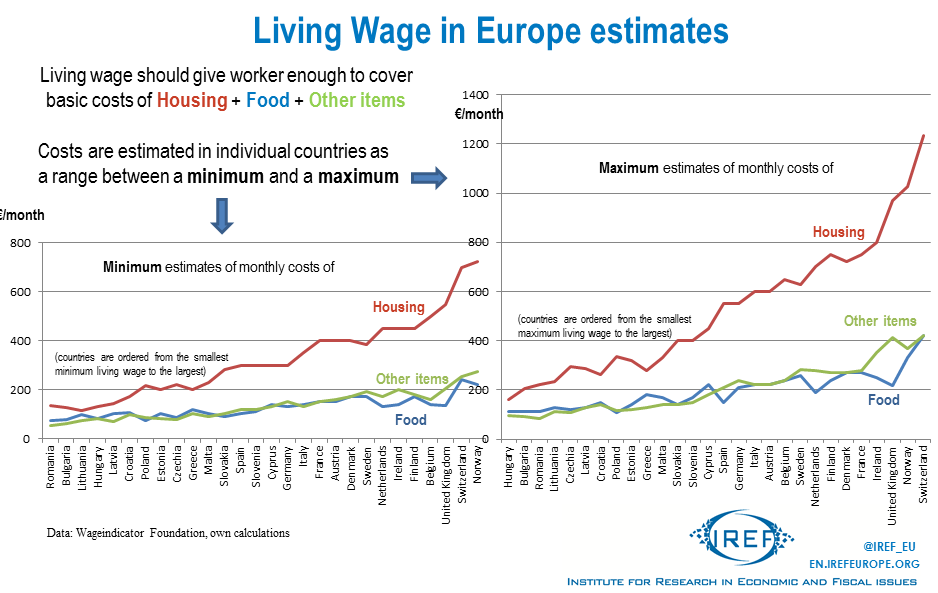 We see that the order of countries has changed, sometimes considerably (cf. Czechia, France), depending on whether minimum or maximum estimates of living wage is used. It should not surprise anyone how different the costs of housing are from country to country. Housing is by definition a non-tradable good and therefore arbitrage between countries is difficult to converge prices closer together. But the relatively large differences in estimated costs of food are surprising since food is a much more tradable commodity. Indeed, around a half of EU budget (called Common Agricultural Policy) is supposedly spent on making sure that food is very tradable throughout the EU. Of course, this may also reflect different levels of unobserved quality of food in the different countries. Both graphs are drawn on the same scale to show just how wide the gap between minimum and maximum estimates are.

Not all European countries have a minimum wage instituted (though their number grows; recently Germany has joined the ranks). In some countries it only has limited application in certain circumstances. Nevertheless, Eurostat does try to come up with comparable figures across Europe for those countries that have something closely resembling a minimum wage. Some countries specify it per month, for those countries where this is specified hourly Eurostat converts this to a monthly figure through the standard work-week length (ranging from 35h/w in France to the standard 40h/w in most of the EU).
How does the proposed Living wage compare to the current minimum wages in those countries which have them? Remember, Living wage is supposed to guarantee workers a decent life, by its proponents’ own calculation. 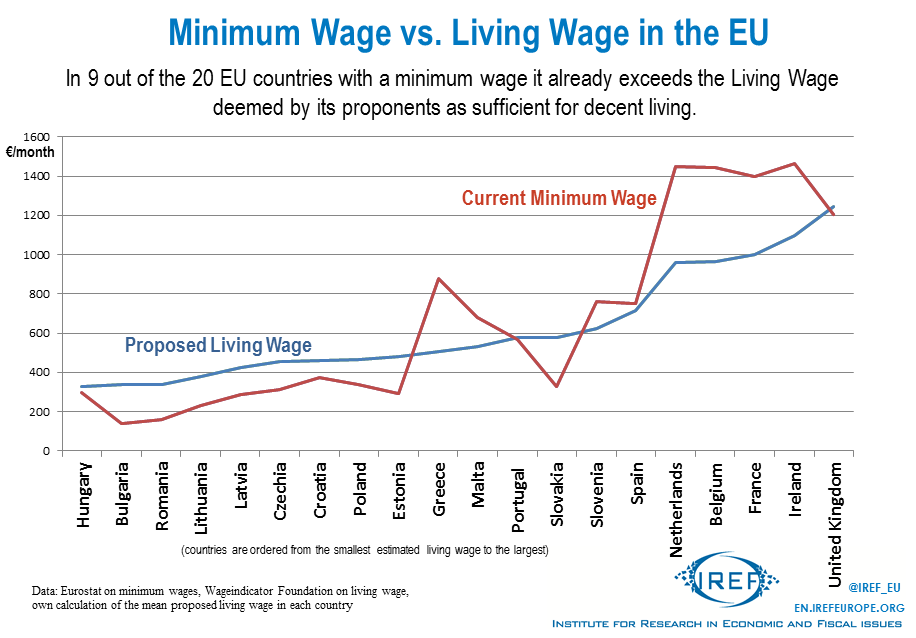 Without any guidance as to where between the minimum and maximum the living wage should lie, we have taken the customary arithmetic average of the two, not to overestimate or underestimate any conclusions. It is striking to see in how many countries (mostly in Western and Southern Europe) the current minimum wage actually exceeds the proposed living wage for decent life.

Workers there must therefore be living more than decent lives on even the minimum wage. And that’s even after some very liberal assumptions during calculation of the costs. Housing, the largest component of the living wage, for example, is defined as a “rental rate of 1-room apartment outside of an urban centre”. Most people, however, share accommodation at least with their partners, and two-room units are less than twice the rent.

So what’s going on? Is the campaign for Living Wage dead in those countries where it falls short of current minimum wage? Of course not.

Firstly, taxes matter. A great deal, in fact. It is not clear whether the proposed Living Wage should be gross or net of taxes. If the latter, then it is an impossible guide for policy. Everyone unfortunately has a different tax treatment, and therefore it is impossible to calculate how the actual Living Wage should be set in order to arrive at the net Living Wage. (Unless, of course, Living Wage proponents also advocate personal income tax to be scrapped. If they do – it’s a very interesting proposition, but they need to work that much more on sources of financing.)

Secondly, all these figures are based on single method of estimation, across the globe, collected in an attempt to arrive at comparable figures. If you are an activist in such “generous” country, you are welcome to make your own assumptions and calculations as to what a living wage should entail to afford a decent life.

Decent life is something we all strife for, whether we understand by it material or moral standards. But in either of these two definitions, decent life is not something that can be legislated. 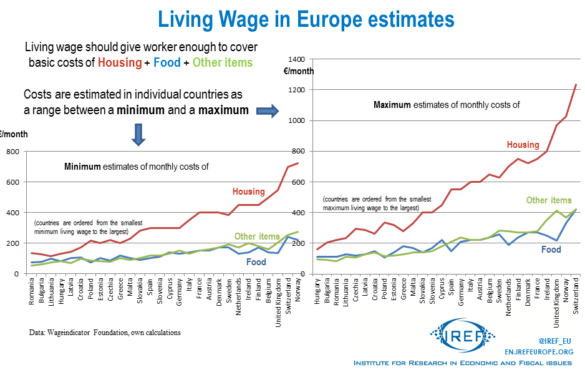 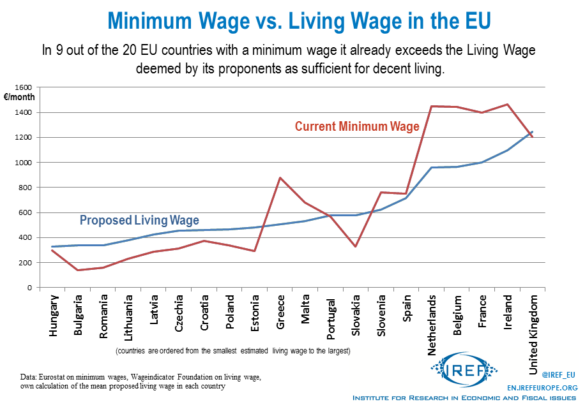 Swiss referendum on minimum wage and the EU

Living wage
I agree, decent life is not something that can be legislated. It has to be free. And about living wages, so it should be dependent on the workers or the employee's work.
http://www.legisocial.fr