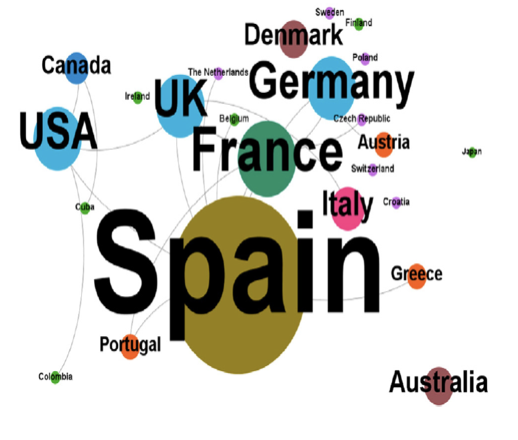 Economists use the per capita Gross Domestic Product (GDP) as the main indicator of the level of material well-being achieved by a country. The GDP is the cake with which we feed ourselves; the portfolio to draw on to meet our material needs. In recent years, there have been many critical voices against the use of GDP as an indicator of economic development or, worse, well-being (see for example the Report by the so-called Sarkozy Commission, freely available on-line). These critical voices differ from each other following the underlying ideological stance of the authors. The extreme perspective is probably the one endorsed by French economist and philosopher Serge Latouche, who argues that the world should be heading for negative GDP growth.

Latouche’s perspective has become very popular. A few days ago, the director of the most important Italian newspaper, the Corriere della Sera, explained why the overall strategy of the actual Italian government seems very much in line with a negative-growth strategy. Indeed, it is no mystery that Latouche’ views are shared by key members of the present coalition government in Rome. These views are popular not only in Italy, however. Fig.1 shows that the widespread interest in de-growth – here proxied by the number of webpages published yearly on the topic (panel a) – parallels a scientific interest that involves researchers from many countries (panel b).

In this increasing interest in negative growth misplaced? Is de-growth acceptable? Is it feasible on political grounds? And, perhaps most importantly: would de-growth make us happier?

De-Growth in a Nutshell

According to Latouche, the big mistake of economic and political thinkers since the Enlightenment has been the straightforward identification of happiness with the (material) wealth of nations. In his view, this has entailed a triple oversimplification. Earthly happiness has been considered a synonym for material well-being. Material well-being has been reduced to statistical “well-having”, that is, to the quantity of marketed goods and services produced and consumed. Finally, the evaluation of the sum of the goods and services is being calculated at gross values, without taking into account the loss of natural resources necessary to production. On this account, happiness has been quantified as well-being: indeed, in 1972 Nobel laureate Jan Tinbergen proposed to rename GDP as BNB, Bonheur national brut: gross national happiness. Latouche’s provocative remark is that two centuries of GDP growth should have then allowed mankind to swim in happiness. Instead, he claims, happiness is what modern societies fail to deliver.

Given the alleged failure of modern happiness, Latouche eventually suggests to go back to the ancient wisdom of limiting needs, to rediscover frugality. This is the essence of de-growth, whose consequence would be primarily one of reconsidering consumption patterns in such a way as to ensure ecological sustainability. Yet, Latouche fails to prove that the world’s population could accept it, and be even happier without all the comforts to which it is accustomed. His only evidence – far from persuasive – rests on the fact that the Vanuatu, a tiny archipelago in the South Pacific, rank fourth according to the Happy Planet Index.

Will De-Growth Make Us Happier?

Certainly, man does not live by bread alone. For example, the availability of material goods cannot compensate for the violations of fundamental freedoms. Likewise, ecological limits cannot be ignored. However, it is dubious that such limits would be better respected if generalized de-growth took place. For example, there is strong correlation – if not causality – between income per capita and demand for consumption and production patterns that respect the environmental. Likewise, deforestation is highly correlated with poverty.

Despite the excitement of some light-minded politician or snooty intellectual, it is very unlikely that an electoral programme where de-growth figures prominently could attract significant numbers of voters; both in less developed countries – where individuals are eager to obtain a more affluent lifestyle – and in more advanced countries, where individuals will unlikely accept a change towards frugality. Voters’ opposition is apparently not important, however, for de-growth supporters, who seem determined to set severe limits to the choices individuals can make.

In brief, de-growth is neither feasible on political grounds nor acceptable without violating basic principles of liberty. One can wonder, however, whether this perspective would make us happier, at least in the long run.

Certainly, one must be very cautious in assuming that GDP is a proxy for a country’s happiness. For example, happiness does not depend exclusively on consumption. It also depends on the way people perceive their role within society, and the chance they have to realize their expectations. This explains why, beyond a certain point, happiness is only weakly correlated with income levels (the so-called Easterlin paradox). By contrast, there is no doubt that cuts in income reduce happiness, especially when these are perceived as losses relative to the others.

Adequate levels of GDP per capita are currently considered a prerequisite for a decent life – as they were in XVIII century Europe, when most economic and political thinkers were highly supportive of industrialization. This is particularly true in many areas of the world where a significant portion of the population lives in absolute poverty. As Martin Ravallion has shown in a recent analysis, the portion of the world’s population living in extreme poverty has dropped significantly in the last 30 years (see fig. 2), decreasing from 43% in 1990 to below 15% in 2015, especially as a consequence of the spectacular growth rates exhibited by some Asian and Latin American economies. What would have happened is we had had fifty ears of de-growth?

It is easy to argue for frugality while having a drink, watching a movie and planning the next holidays in a far-away country. It is not clear whether the armchair advocates of negative growth are ready to change their own lifestyles. One suspects, however, that in their views some would be allowed to be less frugal than the others. 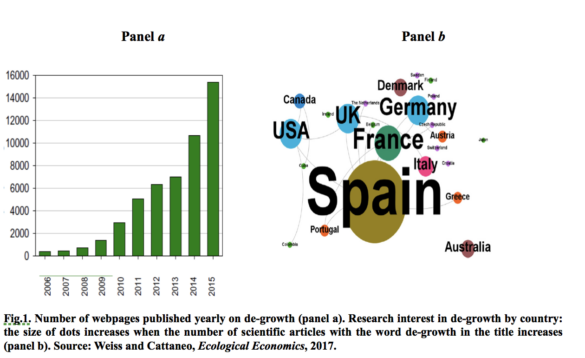 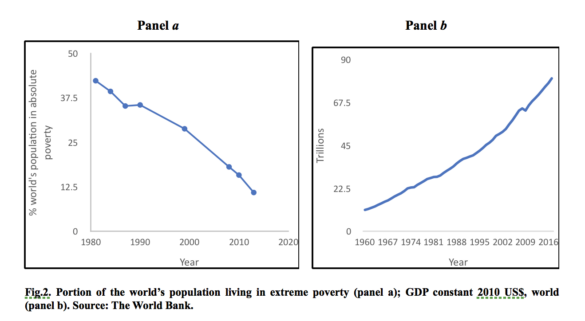