In a poll administered in the US in 2020, 40 percent of individuals expressed a favorable view of socialism. This result is sharper for younger generations – 35 percent of Millennials would gradually switch from a capitalist system to a more socialist system. Similar attitudes are found among undergraduate and graduate students in Western universities, who point to capitalism as the main reason for inequality.

The lack of consistency between peoples’ opinions regarding capitalism and the reasoning that they use to support these opinions reflects their ignorance about capitalism: they simply don’t know what it is. They associate capitalism with a whole range of attributes, none of which have anything whatsoever to do with the system that they are criticizing.

What are these ills that are laid at the door of capitalism? Just a short list includes: business monopolies that jack up prices and prey on captive consumers; laws favoring vested industry interests passed through lobbying, often in backroom insider deals; barriers to entry to squelch small competitors; fatcat executives without accountability to shareholders and multi-million-dollar payouts; systemic crises created by financial or corporate scandals; and the list goes on. If this were the reality of the capitalist system, it would indeed be indefensible.

But none of these ills is an attribute of capitalism – in fact, in a truly capitalistic system every one of these ills would disappear. These ills are the outcome of what Eisenhower long ago called “the military-industrial complex”. And there is a name for this system – corporatism.

What is corporatism? In many ways, it looks like capitalism, so the ill-informed are easily fooled and the malevolent can use these similarities to their advantage. Both systems are characterized by private property rights and the domination of the economy by private enterprises. However, that is where their similarities end. Corporatism is capitalism’s evil twin – identical in its external form, but the polar opposite in its internal beliefs and underlying principles.

There is one fundamental principle that illustrates this black-and-white distinction. The core tenet of capitalism is “free markets and free entry”. This has been true at least since Adam Smith’s famous first exposition of the “invisible hand” in The Wealth of Nations way back in 1776. Corporatism, on the other hand, draws its inspiration from the Keynesian welfare systems, Fordist industrial organization, and the intricate networks of organized interest representation and industrial relations systems, with large firms having quasi-public status and being key actors in macro policy decisions.

Historically, the meaning of the term corporatism “had a strong normative and ideological component, adopted by fascist and communist ideologues and activists […] having at its core the advocacy of an institutional relationship between systems of authoritative decision making and interest representation”. In the 1970s, Schmitter introduced neo-corporatism as a form of policy-making based on interest representation, but without the need for the societal features of pluralism, statism, and syndicalism. An indirect inspiration for corporatism was Schumpeter’s famous work in the 1940s in which he opined that the sheer scale of resources necessary to undertake R&D in the modern economy had reached a level where only large firms could afford to implement innovation processes. And since innovation is the mainspring of a successful economy, he argued that “the trail leads… precisely to the doors of the large concerns”.

The contradiction between the two worldviews of capitalism and corporatism arises precisely from the resulting implications for free entry (mostly by small firms and startups). Even accepting that large firms are necessary in order to implement innovation processes, the capitalist response is never to grant them protection from pesky entrants. By contrast, implementing such protections is a direct implication of the corporatist view. These almost always appear in the form of regulatory constraints and burdens – bureaucratic costs that increase barriers to entry. While some degree of regulation is necessary for the functioning of a free-market economy, the corporatist world is inevitably one of excessive regulation that protects incumbent large firms and allows them to indulge in the ills mentioned above – charging excessive prices, paying their executives lavish salaries and benefits, taking excessive business risk anticipating governmental rescue packages, and so on.

It does not take much analysis to see that most, if not all these ills would evaporate under the pressure of free entry. Firms that charged excessive prices would be outcompeted. Even if they had patent monopolies, they would be innovated around in most cases. Companies that paid super-high salaries and benefits without the requisite results would go out of business. And firms that behaved in ways that consumers did not like would be replaced by others that did.

Thus, the corporatist evil twin world arises from the capitalist one only if the policymaker accepts the assumption that “bigger is better” in terms of innovation processes, and acts accordingly by erecting entry barriers. But is this assumption true? Examining the hotbeds of innovation in the U.S. like Silicon Valley and Boston, there seems to be little to support this position. It appears that most innovation, especially radical innovation, comes from smaller firms. And this is precisely the prediction of evolutionary theory. This theory argues that large firms tend to be good at the “bureaucratized” processes of incremental innovation, while it is small firms that excel at the “search” processes of radical and breakthrough innovation.

There are powerful forces that drive the dynamics of the corporatist world, and these arise from rent-seeking (see the Figure). Powerful oligopolies spend large sums on lobbying governments to gain regulations that erect barriers to entry and protect them from competition. The result is that the observed entry rate of entrepreneurial firms is suboptimal, and the efficiency of the economy is far lower. The worst ills arise under “pure” corporatism (sometimes called “crony capitalism”) – no innovation, little dynamism, and increasing inequality often accompanied by violence. The Suharto regime in Indonesia and the Peronist regimes in Argentina are salient examples. 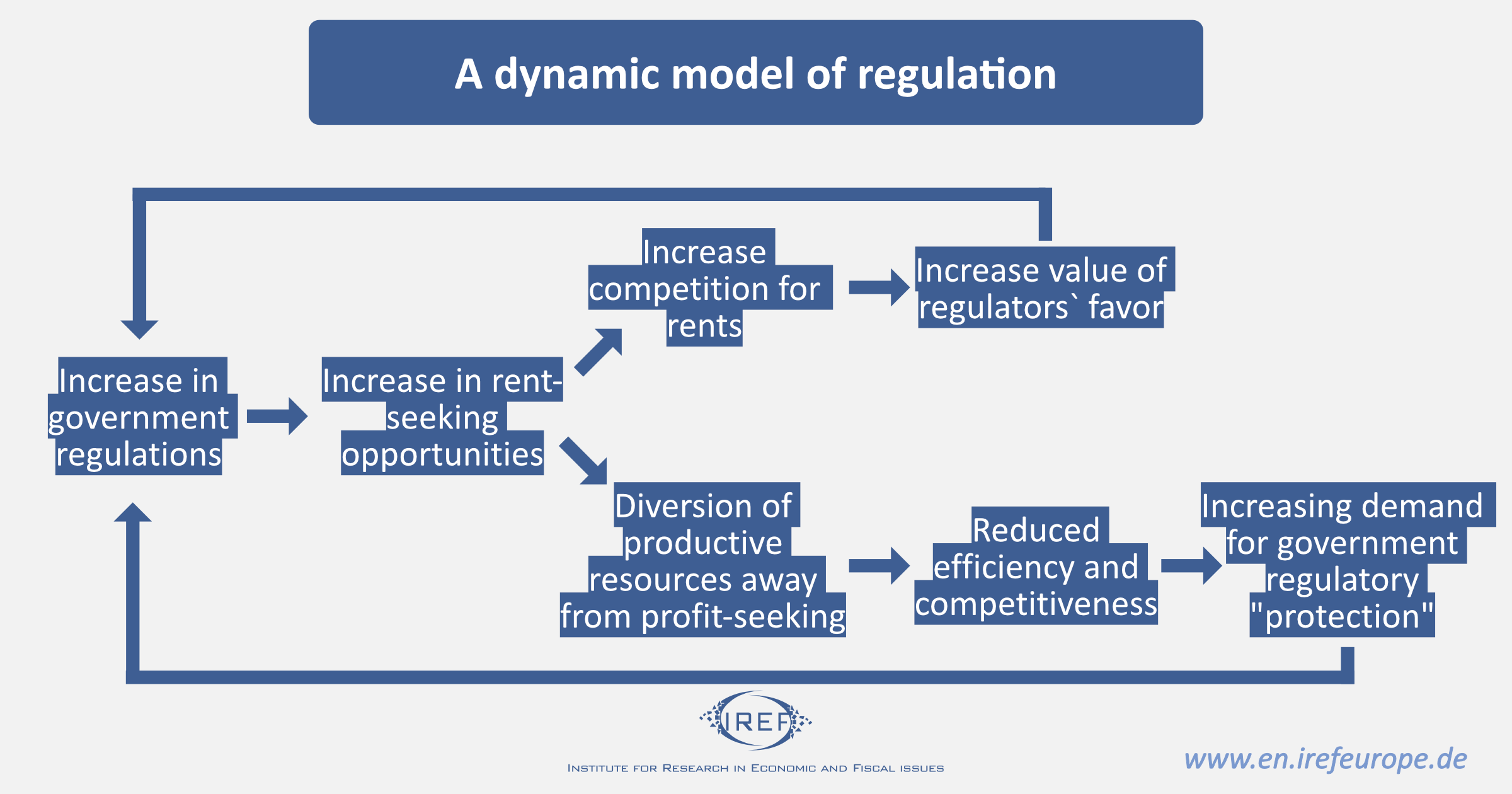 Over the last few decades, many advanced economies have witnessed large firms growing larger, executive pay skyrocketing, and rising income inequality. However, far from being the result of capitalism, these are the outcomes of a move away from free-market capitalism and toward corporatism. What economies need is more capitalism, not less.

What’s in a word, you might ask. After all, Shakespeare said that a rose by any other name would smell as sweet. But political economy is not a bed of roses. In a world of competing ideas, words and labels matter. Words are on the banners that men carry into battle, they are the identifiers of creeds, the definers of causes. By debasing a word, you vilify a system, you magnify ignorance, you demonize a philosophy. In the prescient words of Orwell’s 1984, War is peace, freedom is slavery, ignorance is strength.