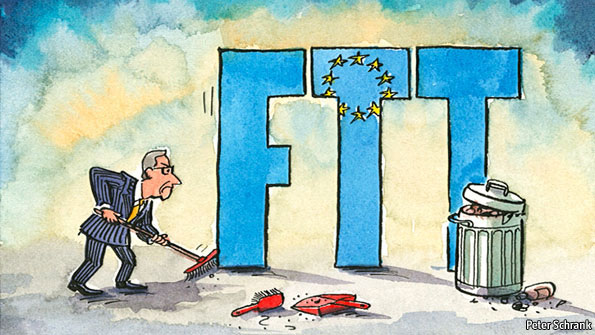 Free movement of people, capital, goods and services across national borders. Those are, allegedly, the pillars of European integration. One of them, the free movement of capital, crossed swords twice this week with EU policy makers convened at the regular meeting of financial ministers. It lost one match, and drew one.

The loss was suffered by freedom through the announcement that the “automatic exchange of information” has now “extended its scope”. This policy, to come into full force in 2017, is a fundamental shift in understanding citizens’ behaviour. When you move money abroad, you are assumed to do so in order to evade tax.

The draw belongs to the biggest money-movers’ freedom. Plans to introduce a financial transaction tax (FTT) have been postponed as the ministers could not agree.

This article argues that it is not enough to postpone the plans. They should be scrapped altogether because FTT cannot deliver on its promises.

The transaction tax in its current proposed form is an enlarged version of so-called Tobin Tax, named after the eponymous Nobelist. It proposed (almost half-century ago) to compensate for the collapse of the Bretton Woods agreement which fixed the value of currencies to gold. Some feared at the time that significant fluctuations in exchange rates would ensue. These fluctuations were seen as bad, and market buying and selling of currencies was seen as the culprit. A currency transaction tax was supposed to reduce these price fluctuations by reducing the trading volume.

It didn’t. Studies have even found the opposite effect: volatility may have increased. This is because freely floating exchange rates need market-makers to gradually adjust the price of foreign currency. Gradual adjustments need many small transactions. If these are made expensive, there is an incentive for traders to delay adjustment until it’s almost “too late”. In the ensuing drama, over-adjustment is possible and volatilities become bigger and more burdensome for the real economy.

FTT did not work in the modern form either

Italy introduced a “modern” version of FTT (on equity and high frequency trading) on 1st March 2013. In the first six days, value of Italian trades fell by 30% relative to the rest of Europe and the drop was subsequently sustained for the rest of the year. Any tax thus raised was therefore very modest. The French version from August 2012 was an even more spectacular failure. The revenue was less than a thirdx`x` of what was expected, and the demand for French equity fell drastically. Many pension funds, for example, stopped trading in French bonds or taking them as collateral. Back in 1984, when Sweden introduced a FTT, 60% of the trade volume in 11 most traded stocks just moved to London.

If the objective of the tax was to raise tax revenue it failed in all instances that have been tried on nation-wide basis. If the objective was to decrease volatility, even the ECB suggests that it is volatility may actually increase as a result of the tax.

FTT could not work under present participation

The main reason for FTT failure is the ability of traders to take their custom elsewhere, to a non-taxed country. Some countries have tried to limit this exodus by applying tax to the trading entities, regardless which market and which country’s equities they use. That simply made the situation even worse, the traders not only moved their activity, but moved themselves altogether. Some countries (like the UK) try to circumvent this by a “Stamp Duty” on all purchases of UK companies’ shares, anywhere in the world. Even if it prevents some flight of traders, it does not prevent flight of companies. A UK company may find it profitable to become legally a foreign company, to avoid this duty.

Currently, an EU-wide FTT is only a dream. Only 11 out of the EU-28 countries are planning to introduce the tax: Germany, France, Italy, Spain, Portugal, Greece, Austria, Belgium, Estonia, Slovakia, and Slovenia. Yes, they include some of the biggest economies, but here size does not really matter. Even a small EU country can create a large financial market to which the big players could escape to avoid their homeland taxation.

FTT could not work even under EU-wide participation.

In the same vein, even an EU-wide FTT would not be very successful in raising revenue. In a digital world, it is relatively easy to move trading overseas.

FTT will make it more difficult to fund projects

Companies raise funds for further investment by (among other things) issuing shares. The higher the share price at initial offering, the more money raised. This price is determined also by the ease with which an investor can divest from these shares. With a transaction tax, getting rid of the shares will be more expensive, and share prices therefore lower. Companies will find it more difficult to raise capital for valuable improvements in our lives.

FTT may contribute to bubbles

The disincentive to trade shares (and other financial instruments) affects their value also in another way. News about company’s market situation enters the trade floor gradually. If share prices can gradually reflect this information, volatility is kept low. Bubbles only burst when people hold off adjustment. FTT is one of such impediments to gradual adjustment of share prices – just as it made foreign exchange adjustments more difficult under the Tobin version.

FTT does not punish the culprits of the financial crisis

FTT is sometimes portrayed as a way of “getting back at the bankers who have “caused” the crisis”. It can be no such thing. Bankers were not the main culprits, they merely responded to the incentives that governments gave them (e.g. by implicitly underwriting bad mortgage loans through Freddie Mac and Fannie Mae in the US). The financial turmoil followed from a burst asset bubble. As we have just seen, FTT may help in creating, not abating these bubbles.

FTT is not tax on rich

At other times, the FTT is portrayed as a tax on the rich “money-changers” (intentionally invoking x. Biblical language).

He who hands over the money and he who ultimately pays the money are generally not the person; taxes are passed on. Even if FTT were collected from the “rich”, ultimately it will be the poorer members of society who will pay. Both banks and traders will pass the cost on and ultimately there will be less money in ordinary people’s pension funds or savings accounts. And as with almost any tax, the rich have better means of finding a way (legally) around the tax; the poor don’t, they are much more exposed to an FTT.

FTT proceeds will not help charities much

Some countries’ plans to earmark FTT proceeds for “good causes” are supported by the non-profit sector. However, it may not help them much. Not only will people have less money to give them voluntarily. Their current income from the government is likely to be decreased, perhaps after a few years. The non-profits currently think of it as “extra money”, but governments, seeing that they are getting income from the FTT, are likely to reduce their support from other sources. Earmarked money will crowd out money from the general pot.

By moving financial transactions away (from the taxing member state or from the EU altogether), it will make existing taxation systems more complicated and expensive to administer. Real taxable assets and true financial situation will be more difficult ascertain as more financial deals are moved abroad.

This completes our initial circle:

With one hand, the EU is trying to limit international movement of capital by its information-sharing plans. With the other, it is pushing capital-owners into such international flight by punishing their domestic financial transactions.
The question is not just “How can this be a sensible policy?”. The question becomes, “How can this even make any sense?”