Rising Rates (Everywhere Except the Eurozone) Expose the Fintech Chaff. The Unintended Consequences of Ill-Conceived Regulations.

written by Gordon Kerr and Bob Lyddon, with Enrico Colombatto May 18, 2022

Tech has been on a tear for 15 years, and European financial technology (fintech) has been encouraged for multiple reasons, not the least of which is that the financial authorities are well aware of the technological as well as particular financial weaknesses of Europe’s banks. We commented on the two main fintech enabling regulatory initiatives; Open Banking to encourage the sharing of customer data, and ‘sandboxing’ – the exemption of fintechs from certain rules here.  When these regulations were created the hope was presumably that clever tech companies would gobble up much retail banking business and thus, through competitive pressure, compel banks to shape up or fade away.  We think this is unlikely to happen, since no major fintech bank looks likely ever to make a profit. 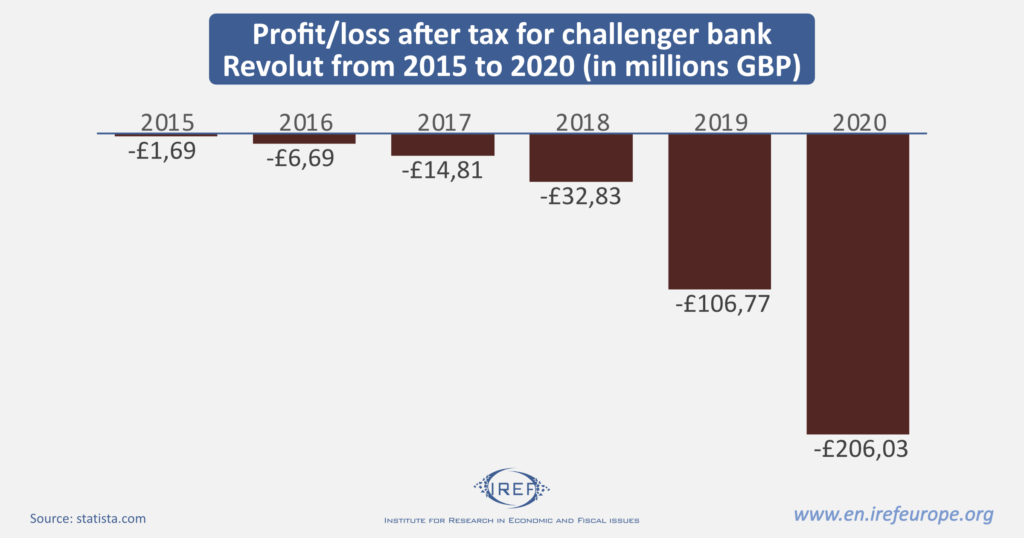 Although technically London based, Revolut is a Europewide Fintech giant whose latest capital raise in July 2021 valued it at USD 33 billion.

Germany’s N26 is the second largest ‘digital bank’ in Europe, although interestingly it pulled out of the US for ‘strategic reasons’ and severed ties with London, we believe in response to Brexit.  Also, a private company, its latest funding round (October 2021) valued it at USD 9 billion, and in February of this year it announced its 2020 results: further losses of €150 million.  It is Germany’s second most valuable bank by market capitalisation.

The British competitor Monzo is faring no better.  Founded in 2015, it raised capital in December at a valuation of GBP 4 billion, has five million registered users and is incredibly trendy.  Its income streams are threefold: i) interchange (commission from card-based transactions); ii) services such as monthly account fees; and iii) interest on its cash deposits. It has never made a profit and reported 2021 losses of GBP 129 million.   Investors appear not too worried and are reassured by Monzo’s plans to start a lending business and earn profits from that.

Why are these valuations soaring as losses mount?  Look at Amazon, protagonists say, that company was loss making for years.  But surely the difference is that Amazon exploited its ‘first mover’ advantage and from the start planned to make heavy losses in its developmental phase to render its position as impregnable as possible to second movers.

Amazon is of course one of the five global tech companies in the mini-index termed FAANG. The acronym comprises Facebook (now Meta), Amazon, Apple, Netflix and Google (Alphabet). Collectively valued at USD 2.5 trillion in August 2021, this figure had shrunk to USD 1.5 trillion by the start of May.  April was a bad month for tech stocks in general, the Nasdaq was down 13% and thus recorded its worst month since 2008.     Amazon must cope with reducing online sales; the US Census bureau’s online sales data shows 15.7% of all US retail sales as online in Q2 2020, falling back to 12.9% by end 2021.  Of course, the easing of pandemic restrictions has enabled people to go back to the shops.  But the second major reason cited by analysts for these share price falls is rising interest rates.  The 10-year US Treasury yield was about 3% in early May, and perceived to be heading only higher, not only painting a worrying picture for the general economic outlook but also loading genuine costs onto companies such that finance providing fintechs have suffered particularly harshly.

One of the fastest- growing areas of Fintech over the past three to four years has been BNPL.  The leading European company is Sweden’s Klarna, whose model is to offer its services to customers through now 14,000 retail merchants.  A typical customer wants to buy a €200 pair of shoes but prefers not to pay for them now.  Louboutin and Klarna have agreed a 24% discount on the shoe retail price to Klarna customers, and this was considered enough to finance not only the interest cost of the consumer financing but also credit losses and all of Klarna’s infrastructure.

Investors have been piling into BNPL because it is not classified as lending or credit provision, so the business models generally exploit regulatory loopholes.  Multiple new BNPL businesses operate in the US, Europe and interestingly in Australia.  The share prices of the fastest growing ones reached dazzling levels by the summer of 2021, with media and analysts predicting that BNPL would in time replace credit cards.  At end 2021 experts were predicting €177 billion of European BNPL retail sales[1].

Rarely, however, has a tech bubble burst as spectacularly as BNPL now is.  Shares are slumping as investors focus on credit losses.   Klarna is writing off 11.2% of receivables per annum, Afterpay and Zip (both Australian) 13.9% and 9.7%.   Klarna’s losses are equivalent to over four times the average US bank’s credit card loss/ receivables rate of 2.62% per annum.  These levels of losses are probably fatal for the BNPL industry as investors run for the hills.  In Australia the collective market capitalisation of the industry has fallen 92% in nine months, from a 2021 peak of A$ 46.4 billion to A$ 1.9 billion in April.  Grant Halverson, a leading BNPL analyst comments:

Interestingly, Apple also has plans to get into the BNPL business, and of course will be aware of all the above points. But a different part of the banking tech spectrum is where fintech has perhaps been most successful – the payments business. Apple is a major player here, boasting 50 million US Applepay users, and has announced new expansion plans[3].  Jack Dorsey’s Block (formerly Square) is another big name. Big tech is likely to pose a significant threat to fintech’s existing payments businesses.

Regulators are always late to the tech party, allowing bubbles to grow. They are still trying to understand crypto some 14 years after inception. Very serious concerns should be raised now as to the wisdom of the aforementioned European fintech ‘light touch‘ regulations. Unlike Amazon’s carefully planned, capital powered growth path, the largest digital banks display little signs of planning other than slick marketing and easy to use apps. Becoming trendy has been seen as more important to investors than making profits. But as funding costs rise, we expect to see who is ‘swimming naked’ as Warren Buffet would put it.

It is unlikely that Fintech digital banks like Monzo can turn around their fortunes by branching into lending businesses. The main reason that the Western banking system failed in 2008 was that there were too many banks chasing too little quality lending business. To drive growth all banks reduced their quality standards and margins. The result of the bailouts and continuing central bank largesse has simply been to preserve almost all incumbents. We do not see any low hanging fruit for fintechs. Even worse, as the Silicon Valley giants compete for greater payments business market share, fintechs should take care that when dipping their toes into lending they don’t allow the FAANGS to consign them to irrelevance.  However, given the losses, would that be so bad?

Every month IREF publishes a Newsletter on Financial and Banking Features that are affecting the EU. They are authored by IREF Senior Fellows Gordon Kerr and Bob Lyddon, with Prof. Enrico Colombatto, experts with first-hand insight into financial markets and their interplay with government policy.

Are European citizens safer and better off with GDPR?

More of articles like this! Us millennials need to hear more!