Italy’s general elections took place on September the 25th. As expected, the centre-right coalition got the majority in both Houses and its leader, Giorgia Meloni, who is also the leader of Fratelli d’Italia, will likely be the new prime minister.

The origins of Fratelli d’Italia can be traced back to the Italian Social Movement (Movimento Sociale Italiano, MSI), many leading members of which never denied their fascist roots. Not surprisingly, therefore, the electoral campaign was characterized by warnings about the consequences of a Meloni’s victory in regard to individual rights and foreign policy. Yet, these warnings did not prevent the right-wing coalition from winning. They somewhat echoed similar warnings used against Silvio Berlusconi for decades, which did not prevent him from being appointed prime minister for several times. Part of the failure of Giorgia Meloni’s opponents was due the fact they did not understand what made her candidacy so appealing.

Why are Italians fond of Giorgia?

It is not that easy to find a key idea in Meloni’s political platform. Her party is what might be labelled an anti-immigration one, but the anti-immigration flag has also been the battle horse of Matteo Salvini, the leader of the League. Her party advocates a reduction in the tax burden, a view which is however shared by all the parties in the centre-right coalition. “Italy first” does not sound as a particularly original slogan either. Overall, nothing in the political platform of Fratelli d’Italia seems to justify the wide consensus currently enjoyed by this party. In fact, the reason behind its electoral success is elsewhere.

Fratelli d’Italia was the only party that opposed all the (six!) governments Italy had during the past eight years. Thus, during the latest electoral campaign, Giorgia Meloni could present herself as the only leader that had nothing to do with the poisoning atmosphere of the halls of power. This strategy – previously implemented with success by Matteo Renzi (Democratic party), Matteo Salvini (the League), and by the leaders of the Five Stars Movement – made her extremely appealing.

This insight finds support in Fig. 1, which shows the voters’ attitude in regard to the main party in power. From 2014 to 2018, Italy had three coalition governments, and in all of them the main party was the leftist Democratic party. During those years, its share of votes dropped from 41% (2014 European parliament elections) to 19% (2018 Italian general elections). At the March 2018 general elections, the populist Five-Star Movement got the lion’s share of the votes (33%). It gave birth to a coalition government with the League, but suffered badly: the Five Stars got only 17% of the votes at the 2019 European elections. In the same period, consensus for the Democratic party, which was not part of the government, rose from 19% to 23%.

In February 2021, the Five Stars Movement, the Democratic Party and the League decided to jointly support a coalition government led by Mario Draghi. Since then, all these parties lost consensus. This happened despite Draghi’s popularity. 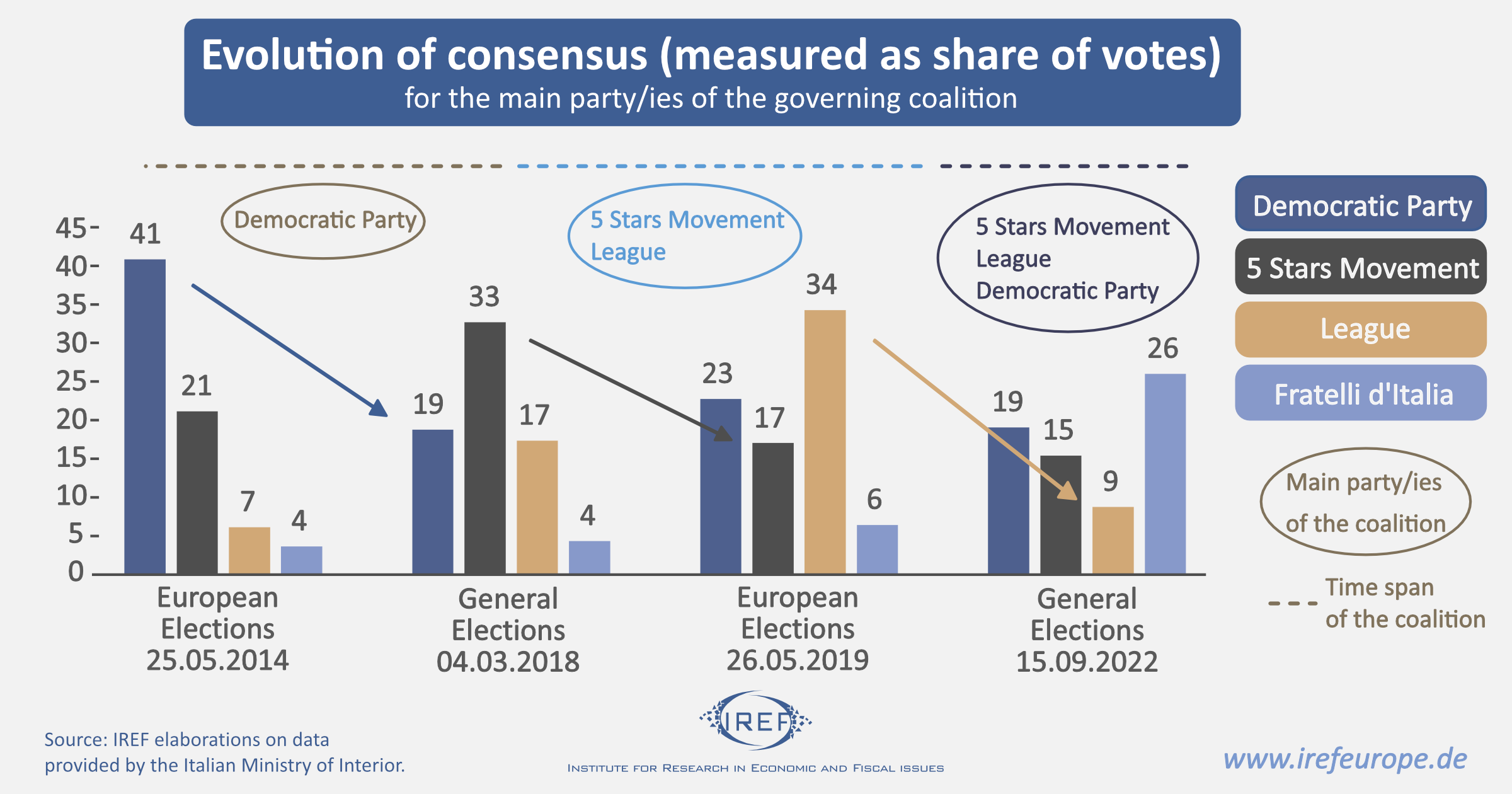 Indeed, the only party that has constantly been gaining votes over the period 2014-2022 is Fratelli d’Italia, which was never part of a coalition government.

One plausible reading of the data suggests that in Italy people do not trust government and that elections are the right occasion to signal dissatisfaction with whomever is in power.

Many observers fear that Fascism has come back, that the Italian foreign policy will change and rights will be reduced. This is not what one should rationally expect, however. When Fratelli d’Italia was a tiny party, neo-fascist temptations were well represented. Given its current size, these temptations have been diluted.

It is true that Giorgia Meloni and her party come from a tradition of political corporatism mixed up with state interventionism and dirigisme. Yet, this does not match well the current aspirations of a large portion of the Italian society. Hence, despite some folkloristic law making designed to pander her supporters, democracy and freedom in Italy are not in jeopardy. Rather, and in contrast with from what most Italian voters hoped, it is unlikely that the rooms of Italian politics will get much fresh air.

Reframing the Debate on Online Speech: The Search for Ideological Coherence and Sound Ideological Grounds Between Freedom of Expression, ‘Economic Speech’ and Freedom to Conduct a Business