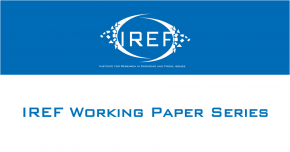 In a new IREF Working Paper, David Stadelmann (Bayreuth University and IREF) and his co-authors discuss how the corona epidemic can be made less burdensome. They focus on the role of those who are immune after recovering from the illness and do not pose any health risks to others. The authors point to corona immunity as a resource that should be searched, found, produced, certified, and finally employed to ease the way out of the lockdown.

Immunity as a resource

At this point, COVID-19, the illness caused by the corona virus, can be observed in almost all countries in the world. Similar countermeasures are applied worldwide: lockdowns and social distancing put limits on public life. The damage done by the virus is limited by these countermeasures, which in turn have themselves more or less visible negative side effects – economic, social, and psychological.

The authors of the paper argue that it is crucial to skilfully employ the immunity of recovered patients to limit the harm caused by the virus but also by the countermeasures. People who recovered from the infection do not transmit it and are equipped with antibodies that, according to today’s state of knowledge, make them immune at least for some time.

On the way back to normality, their immunity is a valuable resource that, according to the authors, should be cultivated carefully. Extensive testing should be employed to search for it. Immune individuals abroad and at home should be certified to allow them to resume their economic and social life. The possibility to be certified would give an additional incentive to get tested and would thus allow to find additional units of the resource immunity, as the authors maintain. Finally, the authors consider the possibility that individuals might expose themselves to the risk of being infected under controlled circumstances to produce immunity. These measures aim at increasing the number of immune individuals and the share of those who know they recovered from the disease. This would allow them to contribute as much as possible to mastering the current challenges, in health care and other areas of society.

At least since the latest crises starting in 2008, we are keenly aware of the far-reaching consequences economic crises may have. The authors point to the risk that bankruptcies may lead to banking crises that may spiral into economic crises. But a strong economy contributes to a robust and effective health care system and a population’s life expectancy. Besides economic consequences lockdowns and isolations also have direct health effects. The authors, for instance, hint at the negative phychological effects of isolations such as increased stress, depression, or insomnia.

The authors fear that politicians focus on the immediate damage caused by the virus while paying too little attention to the social costs of limiting public life that often become apparent only as time passes. As politicians may feel the need to act now they may be particularly inclined to adopt measures already implemented elsewhere as those can be legitimized more easily.

The authors call for acknowledging the current uncomfortable trade-offs, considering health and social costs in the short-run as well as in the long-run, and putting resources including the immunity of recovered to their best use to limit the overall damage of the epidemic as much as possible.

The virus and the countermeasures do not affect all individuals equally. While the mortality rate is higher among the elderly and individuals with preexisting health conditions, self-employed individuals and those employed in the hospitality industry suffer more than tenured civil servants.

From the authors‘ point of view, it is essential – first and foremost for the vulnerable members of society – that the scarce but growing resource of corona immunity is employed effectively. Central to the authors‘ propositions is therefore the certification of immunity. Immunity certificates would allow recovered individuals to signal their immunity to strangers, which is required to put the valuable but non-transferable resource to its best use during society‘s transition from lockdown to normality.