Taxing In and Out Of France 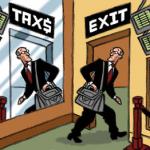 Fighting tax exile: this is Yann Galut’s aim. This French Socialist representative is at the head of a Committee created in the National Assembly to think out measures against tax exile. The work of this committee should end up in bills introduced in the Parliament as soon as May.

Yann Galut is working on two measures. The first one would widen the tax base of the Exit Tax. But more important for the Socialist representative, the second one would force a French taxpayer settling in a foreign country to continue to pay French taxes for some years. The French fiscal law would then do what Germany, Spain, Portugal or Italy are already doing, argues Yann Galut. Would it mean a double taxation? It would surely pave the way to a taxation associated to the taxpayer’s citizenship, an idea already mentioned in the previous months. Whatever the arguments, this kind of measure would lessen the taxpayer’s freedom of movement.

Let’s follow the work of this Committee Against Tax Exil and keep up the good fight!