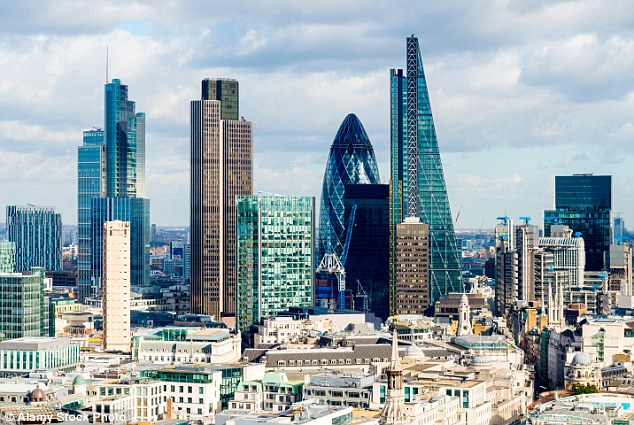 Commercial property sector in UK after the Brexit referendum

The UK’s choice to leave the EU triggered great instability on the financial markets resulting in currency value shocks and asset volatility while both businesses and consumers’ confidence fell sharply.
Commercial property has been amid the sectors most immediately affected by the uncertainty generated by Brexit. In July, seven major commercial property funds operating in the UK have suspended redemptions faced by extra-ordinary liquidity pressures. Such companies (including: M&G, Aviva, Aberdeen, Henderson Global, and Canada Life among others) hold around 15 billion in investors’ money. The halt concerned open-ended funds – which hold part of their portfolio in redeemable liquid assets. In such schemes, investors can ask back their cash, but if the demand for redemption exceeds the amount of liquid assets held by the investment fund, then the fund must suspend withdraws in order to gather the cash required. To do so, the fund must sell some of its non-liquid assets (i.e. properties) which, in turn, affect the value at which such properties are sold.
Albeit last month’s closures are not necessarily a sign of a property crash, it signals that investors expect prices to fall, which is also confirmed by the Britain’s Financial Ombudsman Service (FOS) – the authority set up by the Parliament to deal with issues between investors and the financial sector – which reports that retail investors are increasingly worried about their savings.

Could the present situation evolve in a way similar to 2008?

In 2008 a domino effect began with the halt on redemptions on commercial property funds, and then spread via the exposure of the banking sector in a credit crunch.
Reports from Bernstein analysis group and JP Morgan (graph below) have looked at the Commercial Rate of Exposure (CRE) in comparison to the total net asset value (TNAV) of UK Banks. The UK major lenders have £69bn of risky loans with Royal Bank of Scotland and Lloyds Banking Group being the most exposed – with around £19bn and £13bn of loans respectively. Smaller banks and building societies have an additional £17bn outstanding. 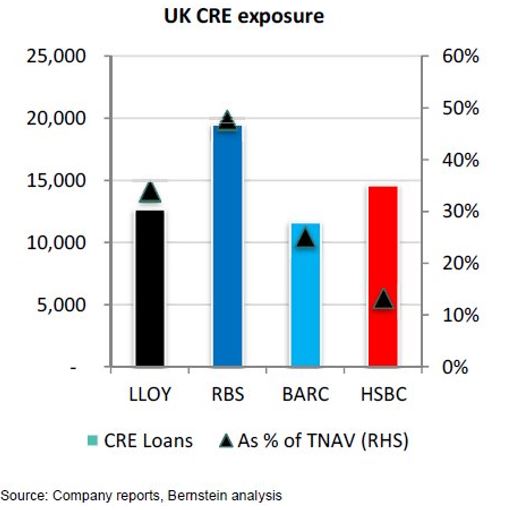 According to the Governor of the Bank of England, the risk of contagion to UK banks is limited because UK banks are now better placed to resist falling real estate values, with a capitalisation level higher than during the previous financial crisis. In 2008, their overall exposure was around £150bn compared to today’s £85bn: thus, they should be able to react to market volatility. This has provided the Bank of England the freedom to relax requirements for lending — unlike in 2008, when credit was abruptly removed from the market.
The European Banking Authority (EBA) is more cautious. The EU-wide stress test carried by EBA on fifty EU banks showed the comparative weakness of two major UK providers such as Barclays and Royal Bank of Scotland, and the tepid performance of Lloyds and HSBC. The situation raises concerns particularly for RBS, which in 2008 was rescued by the Government and today is 70% taxpayer-owned.

How to avoid the risk of contagion?

To prevent the risk of contagion, it is important to avoid that the halt in the Commercial property sector will develop into a devaluation spiral affecting also the residential property market. Investments will not fall if investors could operate in a more flexible and deregulated system. Introducing more freedom will also help reducing the uncertainty in the market and safeguarding capital investments.
The current conditions regarding the length of lease contracts are particularly important. In UK, free-hold properties are rare, above all in desirable locations such as London, Bristol, Manchester or Birmingham. The average commercial lease length is around eight years and up to a maximum of twenty-five. Today, property companies are far less indebted than they were in the previous crisis. As such, they should be able to resist the depreciation of their non-liquid assets, particularly of those properties in their institutional portfolio such as historical buildings in London. We believe that introducing more choice and moving toward a deregulated and more flexible system could provide an acceptable incentive to risk adverse investors. In particular it would be desirable a system that drastically reduced the constraints faced by investors in terms of the length of lease contracts.
With respect to the level of uncertainty in the market, another crucial aspect rests on the ability that the UK economy will have to retain current levels of foreign investments. In the long run, this process will depend on the UK Government’s capacity to negotiate favourable conditions to exit the EU. In the short run, however, there seem to be signals showing that investors are starting to consider investments outside London. The London property market is traditionally highly rewarding due to the inflated prices of properties in the capital. This same aspect, however, is acting as a multiplier of the uncertainty surrounding retail properties value. Instead of focusing on London, a diversified investment strategy in other UK regional cities less affected by the sharp decline in property value could keep the levels of returns from the investment more palatable to foreign portfolios. In this respect, the Northern Powerhouse is already driving investments outside London generating wider spillover effects involving investment properties and in the post Brexit scenario this could be one of the drivers keeping foreign investments strong in UK.