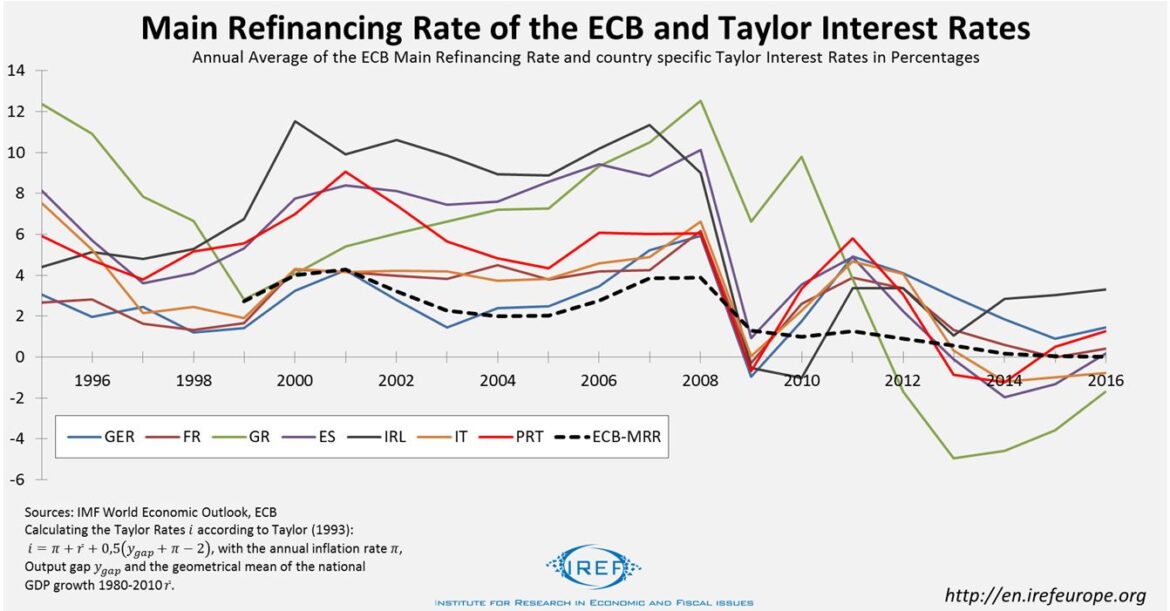 Since the introduction of the Euro in 1999 the European Central Bank sets the main refinancing rate for the whole Eurozone and therefore decides at which conditions banks can take out loans from it. As banks pass through the conditions they face to their customers, the ECB influences the extent of credit creation through its main refinancing rate and thus also affects the economic development of all Eurozone countries.

At latest since the beginning of the financial crisis in 2008 criticism of a unified ECB interest rate grows. Many German commentators regard the interest rate as too low, while others warn of the negative consequences in the wake of higher interest rates for the southern European countries in crisis. Considering the size of the Eurozone and the differences between the economies it comprises, it is not surprising that the unified monetary policies can at no time be tailored to the needs of all of its members simultaneously.

The Taylor rule provides a means for estimating the severity of discrepancy between the monetary policy needs of the different Eurozone countries. It is based on the assumption that monetary policy should factor in the consequences of a change in the interest rates on the inflation rate, as well as on the economic development.

Calculations for several Eurozone members reveal substantial deviations between the country specific Taylor interest rate and the unified ECB rate. Even 20 years after the ECB was founded, there are still little signs that the Eurozone forms an optimal currency union. It can therefore be expected that the unified interest rate of the ECB will give rise to further costs in the future – including further credit induced booms and busts.

Interest Rates since 1999: From almost 5% to 0%
With its monetary policy the ECB primarily targets price level stability in the Eurozone – in practice it aims at an inflation rate of 2%. According to the Treaty on the Functioning of the European Union, the ECB also supports the general economic goals of the EU, as long as it does not threaten its price level stability goal. 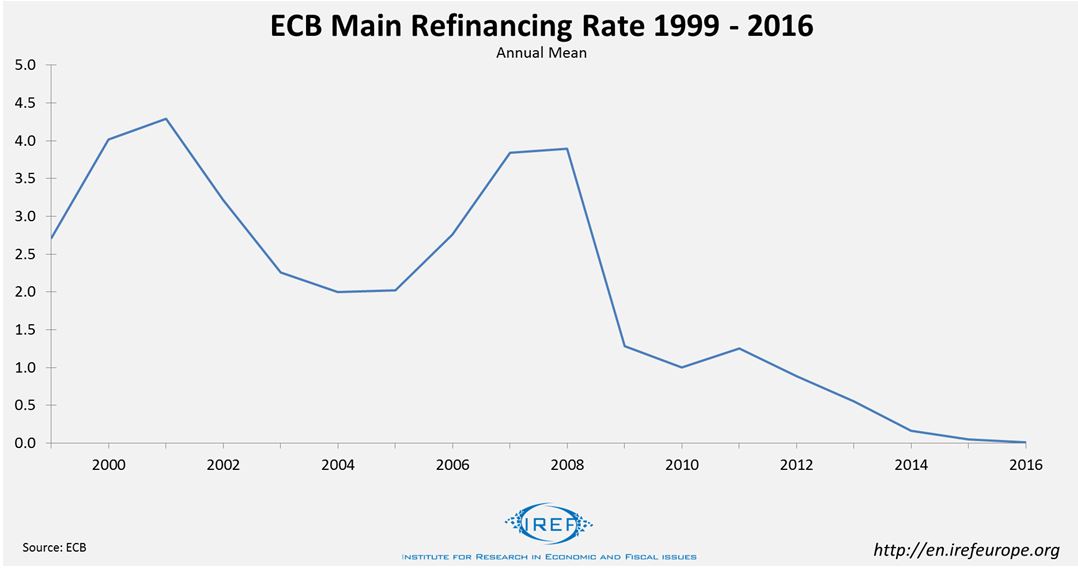 Optimal Rates according to the Taylor Rule

If the monetary policy of the past few years was appropriate for the development of prices and the economic situation in the Euro countries is subject to a controversial debate. In order to get some estimations, the Taylor rule, named after the economist John Taylor, can be used. According to it the central bank should take into account the deviation of the current inflation rate from the desired rate, as well as the economic situation.

Let π be the current inflation rate, r the real market equilibrium rate and Ygap the percentage deviation of the real GDP from its long-term potential – the so called output gap – then the Taylor rule in its elemental form becomes

Deviating Taylor Interest Rates for Euro countries
With the data of the International Monetary Fund it is possible to calculate the Taylor interest rate for the Eurozone countries. As indicator for the equilibrium interest rate of a country we are using the average growth of the real GDP of individual countries between 1980 and 2010. 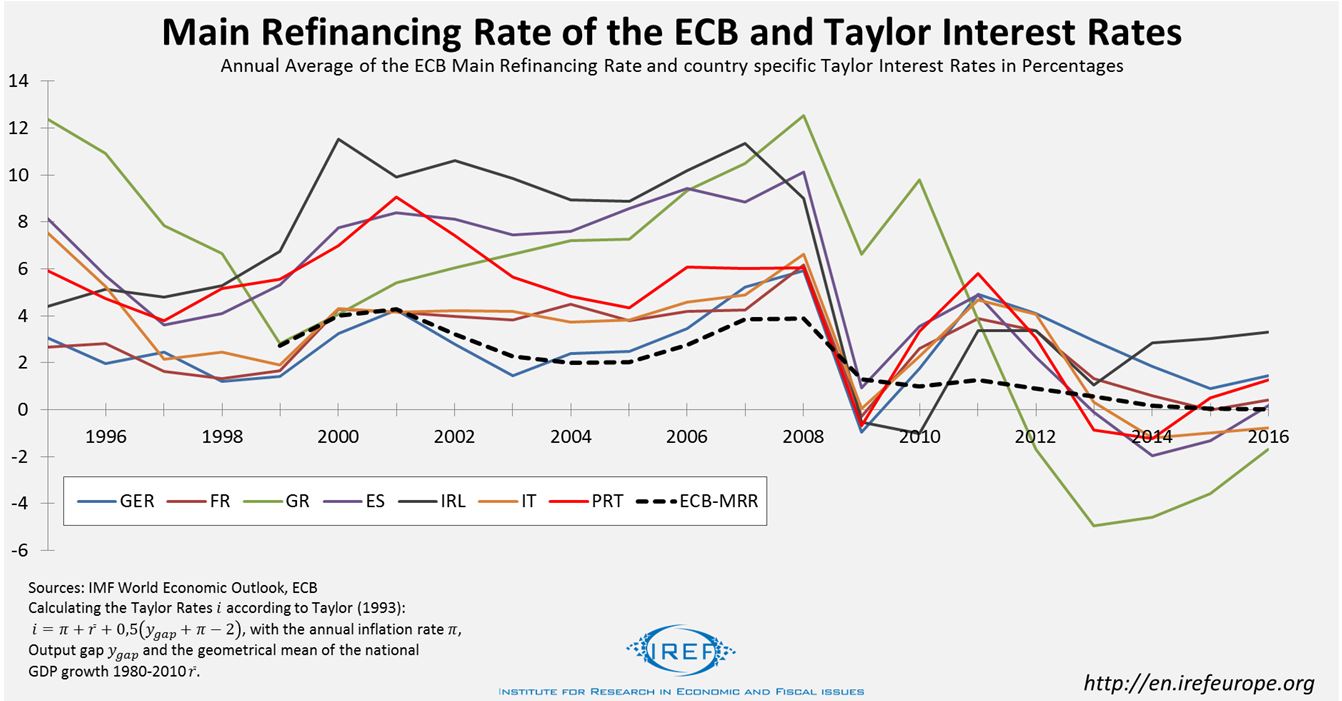 It can be seen that the ECB’s main refinancing rate was close to the optimum Taylor interest rate for Germany from 1999 until the beginning of the crisis in 2009, although since 2004 it was increasingly too low from a German point of view.

2000s: Interest Rates too low for booming southern European Countries
For several countries in southern Europe, which in the 2000s had GDPs significantly above their long-term potential and an inflation rate considerably higher than the 2% target, the interest rate set by ECB was constantly far too low.

For example in Greece, during its boom years before the financial crisis, a much higher interest rate level would have been appropriate according to the Taylor rule – 2008 the difference amounted to 8.6%. The far too low interest rates significantly contributed towards the excessive indebtedness in Greece, which still weighs down the Mediterranean country to this day.

Like in Greece, interest rates below the Taylor rates during the pre-crisis years most likely led to excessive borrowing by private and/or public actors in Portugal, Spain and Ireland and to a lesser extent also in France and Italy.

Today, we are consequently still in a situation of the unified interest rate set by the ECB deviating from country specific Taylor rates. Currently, Germany and Ireland belong to the countries for which the ECB’s interest rate is significantly too low according to the Taylor rule.

What are the Implications?
Long-term studies demonstrate that low interest rates are one of the major causes for economic crises triggered by excessive borrowing. The unavoidably unified ECB interest rate for all countries of the Eurozone therefore has the potential to result in debt induced crises in countries for which it is too low. Concurrently, it hampers economic activity in those countries for which the interest rate is too high. For these reasons, almost 20 years after the foundation of the ECB, a single monetary policy for the entire Eurozone is still not overly attractive.

This article is a translation of an original piece published on our German site and available at http://de.irefeurope.org/1237 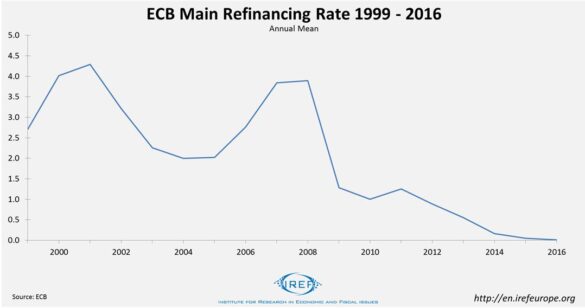 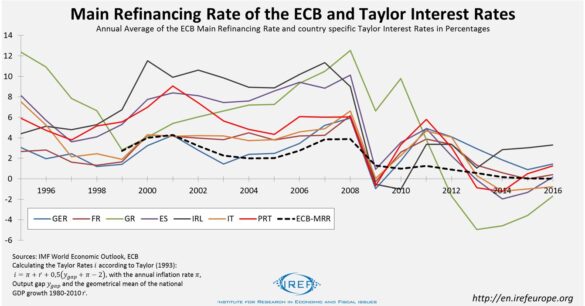 What is the future of the Northern Powerhouse?