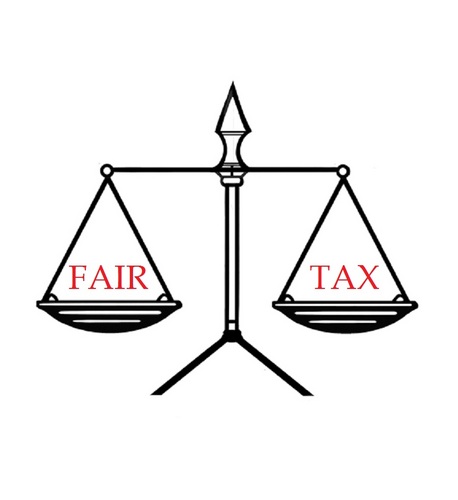 “Fair tax(es)” is a beautiful idea everybody wants to subscribe to. Including, of course, modern EU politicians. Their idea of “fair tax”, however, differs very much from the way in which people understood the concept in the past.
It is no longer about making sure the tax is fair to the taxpayer. It is much more about making sure that the taxpayer pays “her fair share”, meaning “enough”.
This is a dangerous development.

Everyone is in favour of fairness. And of course, we also want “fair taxes”. But just what does that mean?

European politicians were known to invoke the “fair tax” card in the past, but especially the new 2014 EU Commission have opened the floodgates. And it is not even all about the “Lux Leaks” scandal where the EU Commission President Juncker had previously been arranging special tax deals with companies as a Finance Minister and Prime Minister. Politicians in individual member states are not far behind with their notions of “fair tax”. In Britain, for example, the Prime Minister’s cry that “companies must pay their fair share of tax” locked horns with the opposition’s “Fair Tax Plan” of increasing the top rate of income tax to 50%.

While talking about “fair tax(es)” is nothing new, in this quick review of the past we illustrate that when modern European politicians talk about “fair tax”, it means something quite different than it used to. Once upon a time, writers were concerned that taxes be fair to the tax-payer: she should not be charged too much or taxed on things or activities deemed unfit for taxation.

Nowadays, the modern European politician is concerned that taxes are high enough, so that nobody gets away with legally either paying less than others or paying less than is necessary for government’s “fair” redistribution.

Fair tax in ancient civilisations: What is fair?

The Ancients were fully aware that taxes exist because someone imposes them by force and there is no guarantee that one gets a “fair value” in return. Even the celebrated earliest record of taxes we have, found in clay tablets from the Sumerian town of Lagash some 6000 years BC, does not invoke the idea of fairness. When tax rates were raised enormously (to the then dizzying heights of 10%…) to pay for a war, a perceived “problem” only arose when the high rates continued also after the war. A good King is then praised for returning the taxes to the original level as had been promised – and that’s fair.

Two men have written about “fair taxes” more than others: John Locke and Adam Smith. For Locke, a fair tax was essentially no tax, since citizens have the right to enjoy the fruits of their labour. However, we still have a responsibility to pay some minimal taxes. Smith takes this up further and although he never uses explicitly the expression “fair tax”, he has given us the four basic “canons” of what many have subsequently seen as “fair” taxation: equity (taxes proportional to ability to pay), certainty (defined rules, no Juncker deals), convenience (to the taxpayer) and economy (tax at sensible rates).

With a possible exception of “equity”, which has been interpreted by many commentators as Smith’s argument for progressive taxation, all other principles point in the direction of “fair taxes” meaning low and predictable.

Google’s ngram viewer (which maps frequency of terms in printed materials it has scanned) shows how frequently the debate of fair taxes shows up.

The 1880s and 90s was a time when most American states were introducing inheritance (estate) taxes, and this invoked furious debates about the fairness of this particular new tax. Interestingly, 1942 (the year of the second spike), is also a year of estate tax news. An important amendment to the 1942 Revenue Act finally set out whether communally held property in marriage should also be subject to inheritance tax (apparently it should, in a way). Clearly, the new idea of punishing the spouse with “death tax” once again invoked the idea of fairness.

The blue line (showing frequencies of “fair taxation”) provides an interesting confirmation of the link – it spikes in the first instance when a completely new principle of taxation was being introduced, but not on the second occasion when the debate is on provisions of a specific and already existing tax.
So just like for Smith and Locke, “fair tax” debate concentrates on what is and what isn’t fair to tax.

• When the EU was giving advice to developing countries (“fair tax systems are crucial for poverty reduction and state-building”)
• When admonishing tax havens for not adopting “fair tax practices”. This is the first occurrence ever of the term in the EU online archive
• When talking about subsidies rather than taxes (some EU members giving scientists bigger incentives than others, endangering “fair tax competition”)

This marks a significant difference from the way in which “fair tax” has been invoked in the past – and in contemporary USA (where “FairTax” is the name of draft legislation – sitting in the committee stage in Congress since 1999 – to replace all income, inheritance, excise and payroll taxes with an increased sales tax).

The question is no longer what is “fair” to ask of a taxpayer and how to keep his taxes at minimum necessity. The modern European fair tax question is how to make the taxpayer pay more. This “more” can take two forms.

• Pay more because the government wants to do more (for the poor, as in the first European example), or
• Pay more because so far you have been paying too little (Cameron’s businesses, Labour’s rich, EU’s tax havens).

This is a dangerous development for at least two reasons. It leads to

• the idea of tax homogenisation (the EU now wants to synchronise corporate taxes across member states), and
• a general increase in tax rates since “fairness” is judged on the spending side, not the revenue side. And do-gooding by governments is always difficult to constrain.

Neither development bodes well for the future.

Subsidies: the real reason why foreigners cannot own land