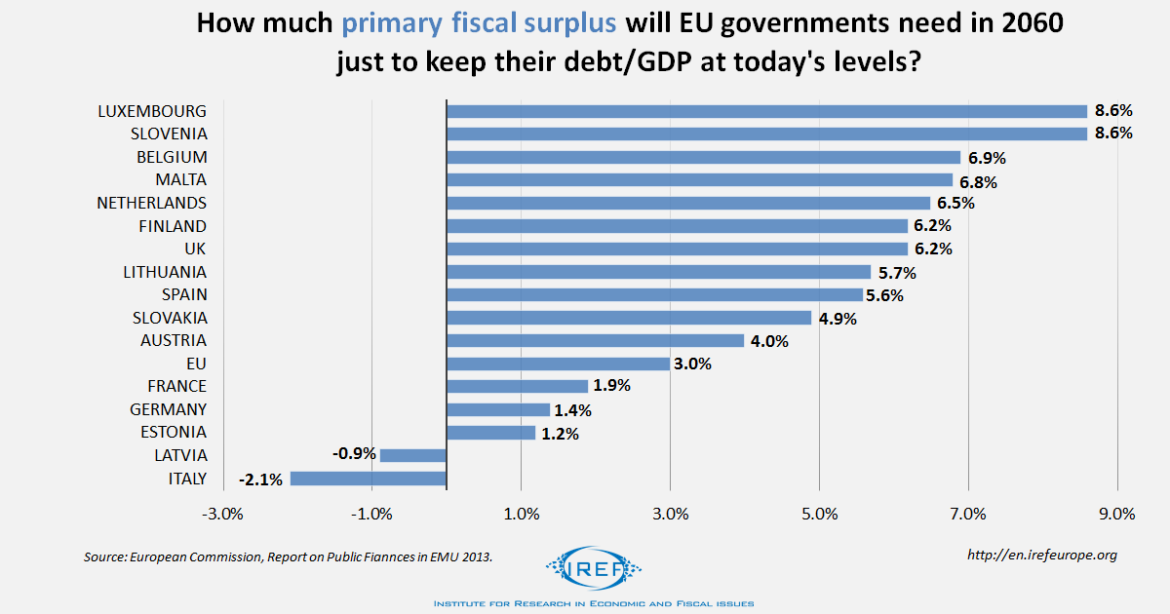 The Greek bankruptcy of 2010 was the latest impetus for reviving the debate on robustness of governments’ budgets in the Eurozone. It became clear that in order to assess the long-term fiscal health, it is not enough to look at the much used public debt-to-GDP ratio. Additional indicators need to be considered which take a broader picture.

Specifically, the design of health-, aftercare- and pension systems play a particularly important role in assessing fiscal sustainability. When the long run spending on pensions and health/aftercare are included in the consideration, an unusual picture emerges: Countries rarely criticised for their budget policy, such as Luxembourg or the Netherlands, are doing pretty poorly. If they want to keep their debt-to-GDP ratios constant, they will have to significantly increase their primary surpluses in the future. By contrast, in some of the often maligned countries, either only small (France) or none at all (Italy) adjustments would be needed. If such adjustments are not made in the fiscal realm and if debt ratios are to be avoided, significant adjustments in the health and pension systems in many countries are inevitable.

In order to better compare the fiscal sustainability of Member States, the European Commission has published annually since 2009 its Report on Public Finances in EMU. In it we find a bevy of indicators evaluating the fiscal situation within the European Economic Area.

In particular, with an “S2” Indicator the Commission estimates the fiscal adjustment that would be necessary to maintain current levels of debt to GDP ratio of a country constant when no structural changes are made (e.g. in the health and pension systems). It takes into account the predicted development of health and pensions payments as well as of economic growth until 2060. The indicator shows the percentage points of GDP by which the primary surplus (the difference between government revenue and government spending excluding interest payments on debt) must grow to meet the long-term government obligations without increasing the debt ratio.

Interesting picture emerges from the 2013 Report: using this indicator, Italy with a debt ratio of 128% is in the long-term perspective in a much better fiscal health than the otherwise inconspicuous Netherlands or Luxembourg with their debt ratios of 69% and 24%, respectively. In order to keep their current ratios constant, their primary surplus would have to increase permanently by, respectively, 6.5% and even 8.6% of GDP. Italy, by contrast, could even reduce its primary surplus by as much as 2.1% of GDP and still keep the debt ratio unchanged. (Of course, at this point we are not passing any judgements on the debt ratio level itself.) 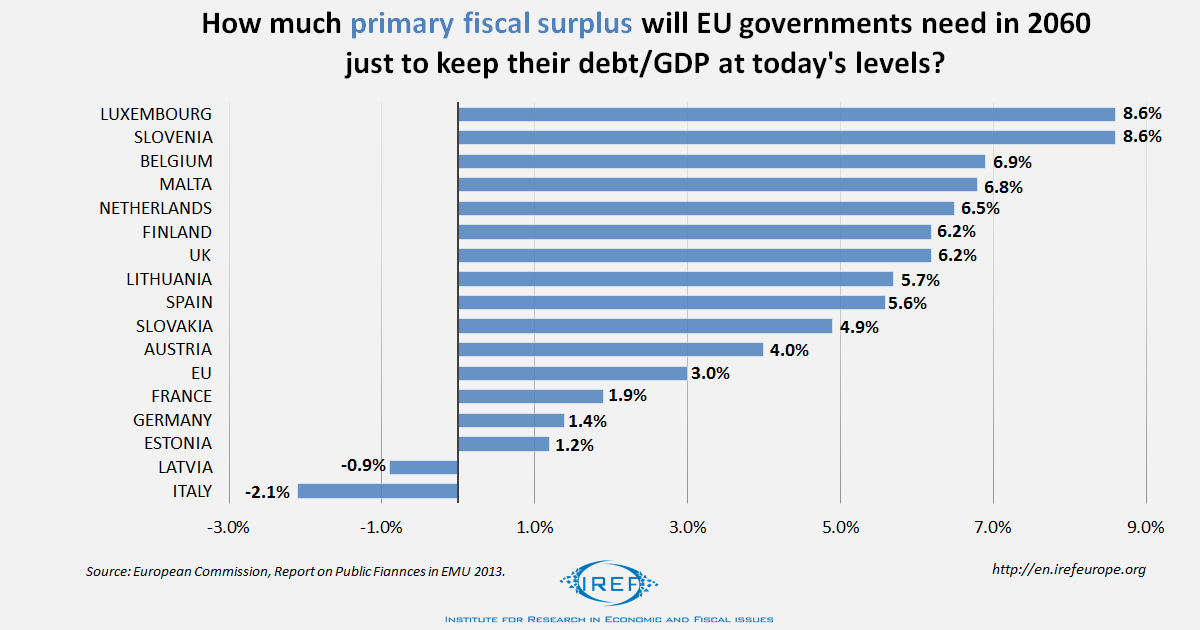 On average, across the EU, the primary surplus would have to increase by 3% to keep the debt ratio constant. Italy, Latvia, Estonia, but also Germany and France have relatively low fiscal gaps of under 2% of the GDP. In the Benelux countries, however, it stands above 6%. The primary culprits for the long-term fiscal imbalances are rising pensions and health expenditures sparked by an ageing population.
Expensive promises: health and pensions

If one believes figures in the Ageing Report 2015, the overall EU ratio of over-64s to 20-64 year olds will rise from 42% in 2013 to 68% in 2060. Given that many countries have pension and healthcare systems organised by the state, an ageing population will result in additional financial burdens on the governments.

According to the Commission’s estimates of 2012, the healthcare expenditures will devour an additional 4.8% of GDP in the Netherlands in 2060. Germany must reckon with additional 3.1% of GDP by then. In stark contrast, on the healthier end of the scale we have not only the Baltic states, but also some often criticised southern Eurozone countries such as Italy or Spain. They both lie well below the EU average of 2.6% and would have to increase their healthcare spending only by 1.5% and 2%, respectively. 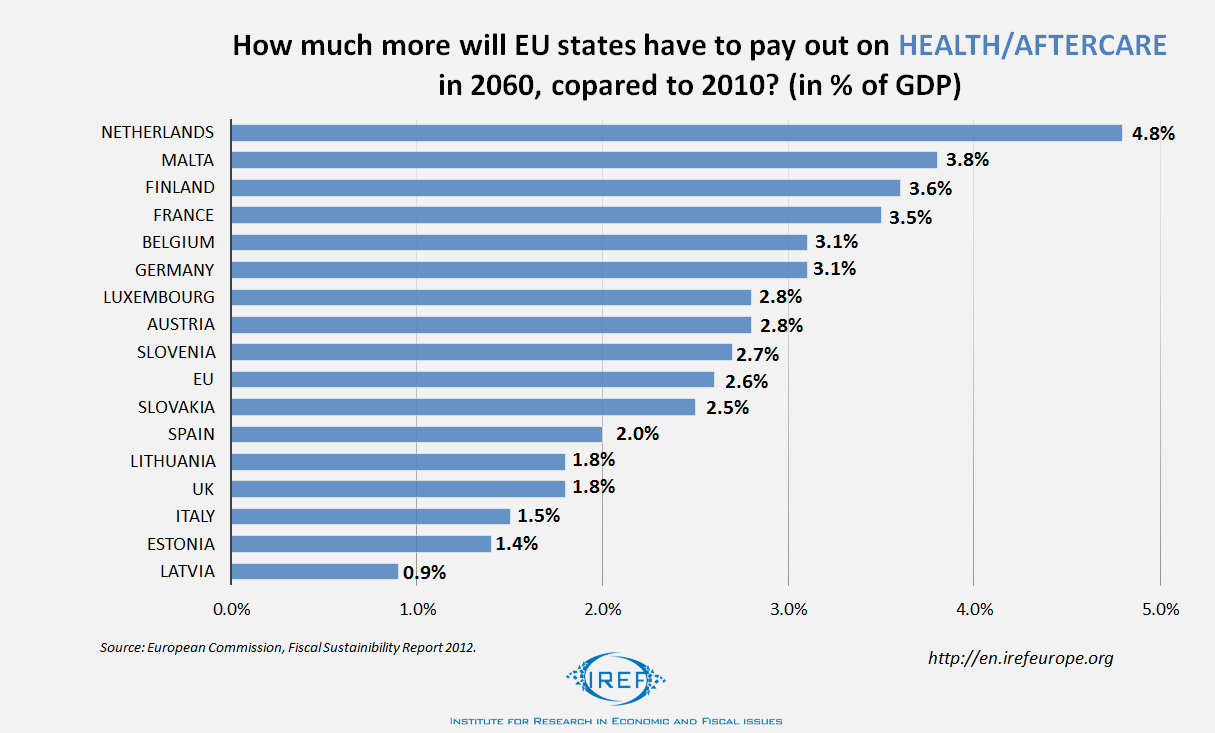 In 2012, the Commission also predicted that the pension payments in almost all countries would rise relative to GDP, except in Latvia, Estonia and Italy. For Luxembourg it predicted that as much as additional 9.4% of GDP would be needed in 2060 for pension payments. The EU average is 1.4%, with France being the only other country managing to stay below it, albeit with a positive increase of 0.5% necessary for pensions. The other large countries are all projected above the average: UK (1.5%), Germany (2.6%) or Spain (3.6%). 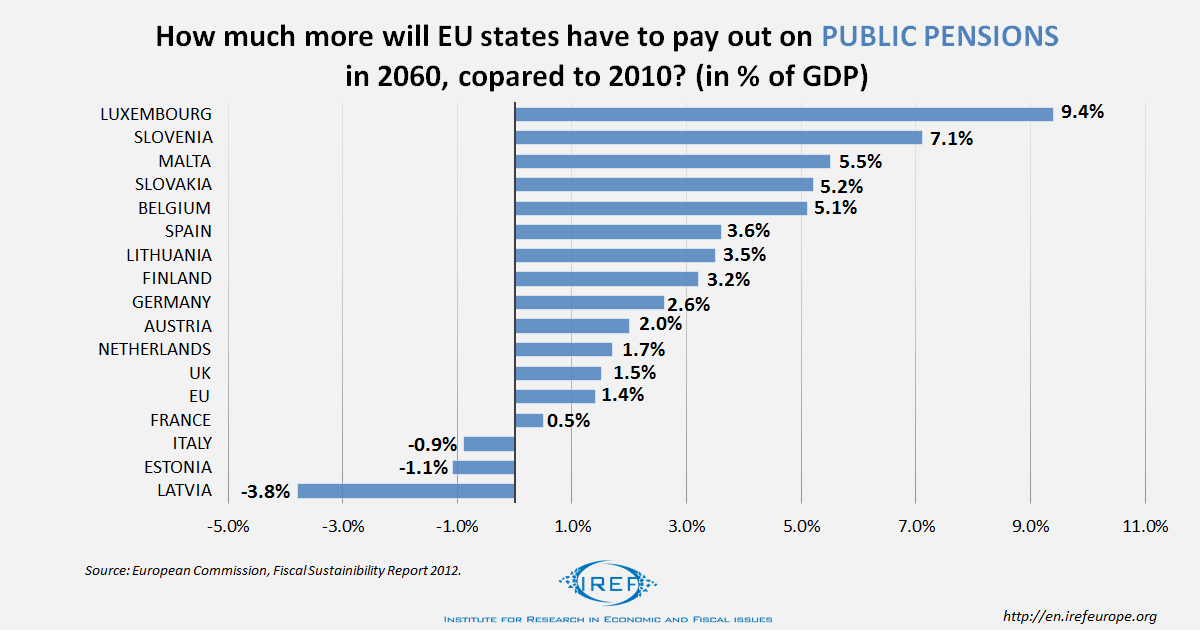 Why are the predictions for Latvia, Estonia and Italy so favourable? Well, it doesn’t have anything to do with a favourable age structure. The ratio of over-64s to 20-64 year olds is in those countries higher than in Luxembourg, according to the Ageing Report 2015. Even more importantly, in Italy and Latvia the ratio will also keep growing until 2060 at a faster pace than in Luxembourg.

The real reason for the projected Italian, Latvian and Estonian declines in public pensions expenditure (measured in units of GDP) are the pension reforms already undertaken in those countries. In Estonia, for example, all employed persons born after 1982 have to contribute to a funded pension scheme. Most other countries have yet to implement such changes to their pension schemes.

If sovereign debt ratios are not to rise in the future, changes to the age of retirement will become necessary in most countries. Currently, it stands at 65 in Belgium and Luxembourg. In Spain, on the other hand the retirement age was increased to 67. In Italy it was increased to 66, but in the future it will be linked to life expectancy so that by 2021 it will have climbed also to 67. Meanwhile, in Germany, in spite of a planned route towards 67 by 2029, the Coalition policy of retirement age of 63 is a policy in denial of demographic trends.

Any forecasts over a period of several decades are, of course, to be taken with a pinch of salt. However, what cannot be denied are the basic facts: Structural changes to government activities are necessary in most countries, not only in those who are currently suffering from financial difficulties. Adjustments to pensions- and healthcare-systems are necessary throughout Europe, often especially in countries which may currently appear to be in good financial health.

This article has been translated from the original German by Petr Barton. 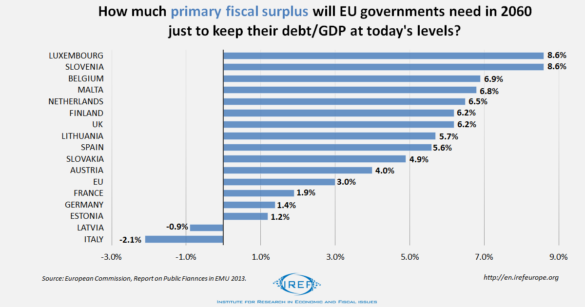 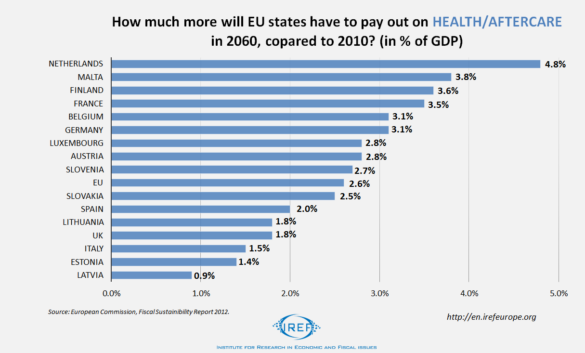 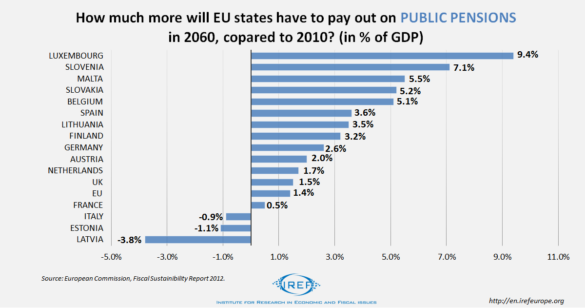 Planned Obsolescence: a tax with strange effect on economy