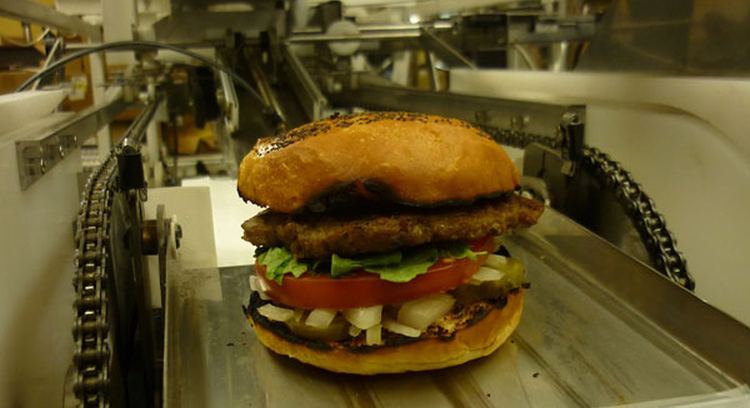 It’s not just USA who is raising minimum wages significantly. New or increased minimum wages are spreading all across the EU, too (e.g. Germany, UK, Portugal..). If we take McDonald’s as a symbol of “minimum wage jobs”, which governments are working the hardest to deprive such workers of any job at all?

Living on low wages can be tough. This is presumably what is driving governments to try to establish (and regularly increase) a minimum wage: they believe that the way to enable people to buy more and live a “richer life” is simply to force up their wage.

Economists warn them, however, that as the economic system adjusts to the increased minimum price of labour, there will be adverse effects – perhaps less immediately observable: some people will lose their jobs, either by being fired directly since they produce less than the minimum wage, and/or as a result of production being scaled down as increased product prices discourage consumers. So minimum wage only helps those lucky enough to keep their jobs, hurts everyone else: producers, consumers, fired workers.

Well, that’s not entirely true. There’s one group which are laughing.

Minimum wage is good for employment. Of robots.

McDonald’s is a textbook example of an enterprise paying many of its workers the minimum wage. Recent rises in min. wage in the USA were, for example, often debated in terms of their effect on price of a Big Mac. 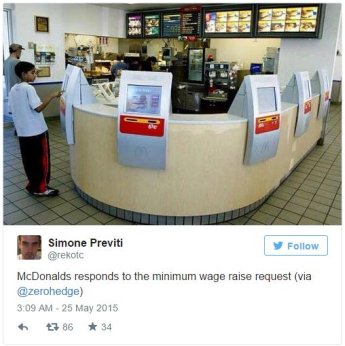 That assumes, however, that McDonald’s would continue employing the same staff and pass the costs to the consumer. But it won’t, it will hire some robots instead. (Which is quite poignant, really. Low minimum wages have been likened to slavery even by university research. The word “robot” comes from “robota”, Czech for “serf labour”.)

Many tasks are rife for automatization. Consider the person taking your order. All they do (besides smiling, supposedly) is to convert your wishes into screen-touches. Anyone can do that – even the customer (who is used to it from supermarket self-checkouts or bank ATMs where this revolution is well underway.)

Since minimum wages are higher in Europe than in the US, McDonald’s actually started installing them in Europe back in 2011, long before their current pilot runs in the USA. And it’s only a matter of time before even the infamous “burger flipping jobs” will be replaced by machines.

Which parts of Europe are set to be the fiercest robots vs. min.wage workers battleground?

Of course there are other equivalent companies capable of switching to machines, but McDonald’s is usually the market leader and its wages are indicative of larger swathes of low-wage jobs. How important is McDonald’s to EU labour markets? 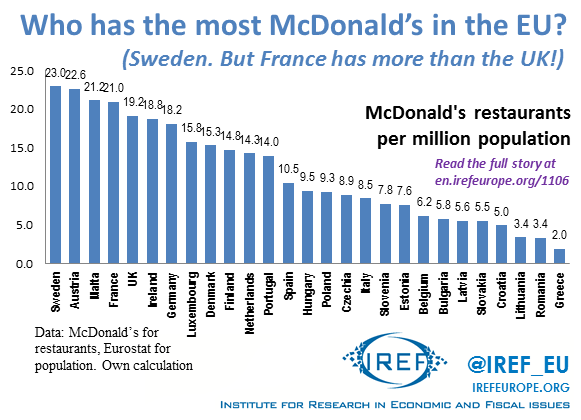 Apparently Swedish and Austrian low-wage labour market has the most to fear. However, these countries do not, strictly speaking, have minimum wage laws. (Sweden has strong union bargaining instead, Austrian 2009 minimum wage laws are no longer enforced.) Beside the miniscule Malta’s tourist-driven McDonalds numbers, that leaves us with France with the greatest potential impact, having (somewhat surprisingly, given the fabled French gourmand resistance) two more restaurants per million than the UK.

However, this may not give a fully accurate picture. McDonald’s is more established in Western EU than in the post-communist countries which occupy all the lower ranks (Greece being, once again, an exception). We should consider how high the minimum wage is in countries with strong McDonald’s presence. 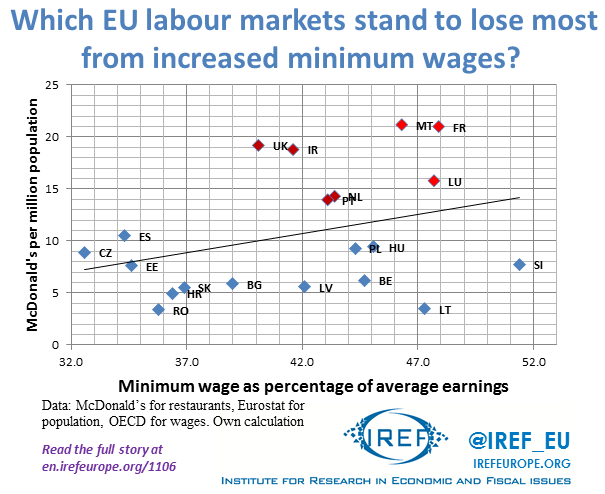 There seems to be some weak positive relationship: McDonald’s presence is higher in countries where the minimum wage is closer to average earnings (and has more bite). France, Luxembourg, Malta, UK, Ireland, Netherlands and Portugal are all countries where replacement by robots is more likely and where McDonald’s is comparatively more important.

There is another way of measuring how high minimum wages are. Instead of comparing them to “normal” wages, we can measure how many Big Macs an hour of minimum wage can buy. Put differently, since Big Macs can tell us how expensive things are in different countries, it can also tell us how many burgers the chain has to sell per hour just to cover the wage of a worker (all sans tax). 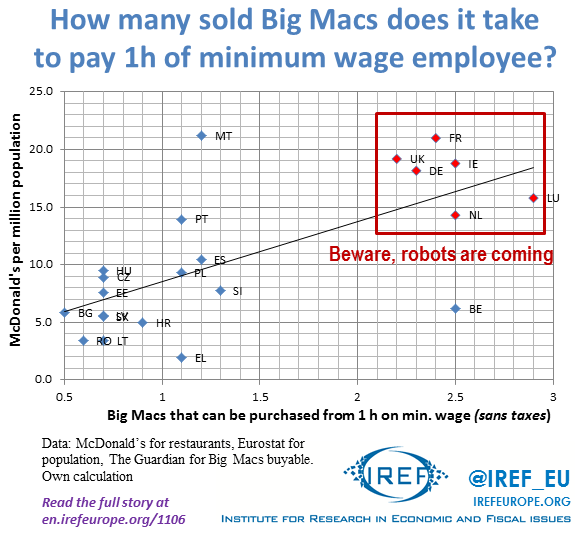 Here the relationship is even stronger, and the most endangered group of countries remains more or less the same. Significantly, Germany has also joined their ranks. (It was missing from the previous graph since following this year’s min.wage introduction, no average wage data are available yet. But we know how much a Big Mac costs there..)

Gradual replacement of crude human labour by tools and machines is as old as humanity itself, and one of the great causes of our advancement since the cave. So far, manual workers “freed up” by a machine have always generally redeployed into other manual tasks for which “machines have not been invented yet” (or were prohibitively expensive).

That may be changing, however. As the economist Tyler Cowen points out, the Average is Over: ever smarter machines are quickly progressing from replacing only the lowest paid jobs to also replacing traditional “middle class” jobs such as bank clerks. In the end there will only be the “losers” surviving by consuming the cheap goods, and “winners” capable of designing and collaborating with the automated systems.

Traditionally, when the minimum wage was pushed up and some workers found themselves replaced by machines, many were “encouraged” to invest into better knowledge and skills to jump ahead of the minimum wage. But if Cowen is right, as minimum wage increases, it is getting closer to the “average” jobs which are now starting to disappear to robots as well. Jumping just ahead might not help employment anymore, a much greater jump to the class of highly productive information workers will be needed. And alas, many of those whose jobs the government gave over to the robots may find it too tall an order. 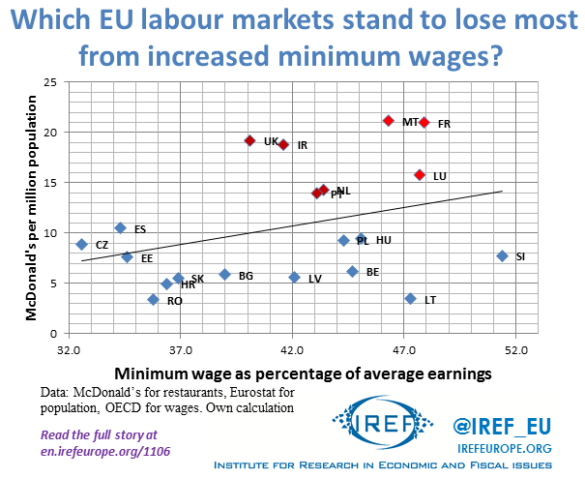