Regulatory Role of One Jean Tirole 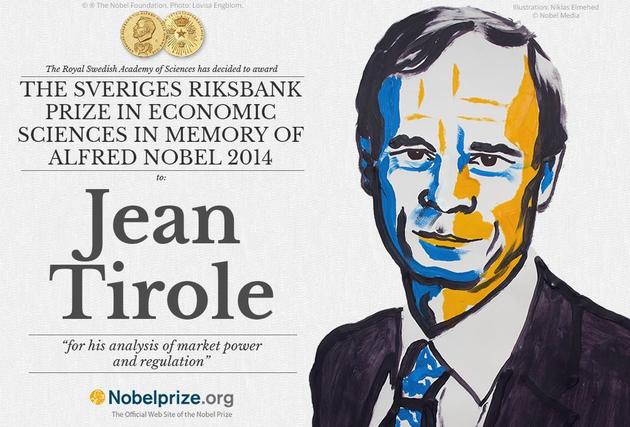 The new Nobel Memorial Laureate is one of prime architects of modern regulation of markets. To many that will make him a social engineer. However, as modern EU governments’ budgets are increasingly suffering from similar problems of failed previous regulation and self-regulation, his voice should increasingly be heard also in the European fiscal realm.

History was made last week. For the first time this century, the Economics Memorial Nobel Prize did not go to someone at an American or British university. This year it will stay on the European mainland.

The weekend before last was gloomy for France. On Friday S&P lowered its outlook for France’s credit rating to “negative”, an advance warning of an actual downgrade of the rating of government’s bonds. S&P specifically mentioned its distrust of politicians to bootstrap the growing fiscal deficits. But then on Monday – Jean Tirole of Toulouse University became the first Frenchman to win economics Nobel since Maurice Allais, 1988.

The two – Tirole and French budget woes – are connected in more ways than through their country.

The Nobel Committee lauds Tirole “for his analysis of market power and regulation”. Most economists know him as one of the dominant fathers of a modern field of “industrial organization”. It investigates how actual markets work and especially how dominant power plays out in them –whether it is the customers, the producers, or indeed the regulators that wield that power. Tirole wrote one of the first graduate textbooks on the subject which continues to dominate syllabi to this day.

Tirole’s contributions to this field (and others) are numerous. But one of the greatest is his study of how specific designs of contracts can lead to something that previous generations of market regulators struggled with: how does a regulator get the truth out of a regulated subject?

His key solution is this: If you don’t know, don’t force one regulatory framework (contract) on a company in a hope that you will get it right. Instead, offer a menu of contracts and let the company choose. If you design them carefully, the choice will reveal the company’s secrets. The government will learn about internal trade-offs within the company from this selection, and can use this information in future revisions of the regulatory framework. (Obviously, a forward-looking company may foresee such revisions and let them influence its current choice, but Tirole’s richer dynamic models take care of this strategic behaviour, too.)

This may all sound pretty remote from fiscal matters, but there are in fact many ramifications of his study for governments’ budgets, especially in the EU.

Tirolean governments get higher taxes and pay less on subsidies

• Approach 1: The company was guaranteed a certain price, protected from movements up or down (save for inflation adjustments). Absence of rises was said to protect the consumer, absence of falls was said to guarantee sufficient future-looking investment by the regulated firm. In reality, though, many regulated companies became more productive and the guaranteed price, uneroded by competition, guaranteed them much increased profits instead. The market was smaller at the high price, and so were government’s tax revenues (especially since customers had less money for other taxed markets). The government could not impose extra tax on the product as it would break the price guarantee, and it could not tax most of the extra profits since the company would reduce its efficiency drive.

• Approach 2: The company was guaranteed to cover its costs. On the condition that it would charge a price that guaranteed it a “normal” rate of return on capital, its survival was guaranteed. But then the company had no incentive to be efficient (in bad versions it actually had an incentive to be inefficient and actually increase costs) and the governments often stepped in with subsidies in order to keep the final price “reasonable” for the customers (their voters).

Tirolean contract menu-choice can get rid of this. By observing the selection, the regulator will at least learn something about the internal possibilities within the firm as the firm selects the “less bad” option. It is up to the regulating technocrat to make sure that the fine print minimizes other negative consequences of regulation, given the firm’s revealed type. Greater tax revenue (from greater market) and/or smaller subsidies will then allow it to reduce taxes elsewhere (ideally).

An even more immediate link from market regulation to modern EU government finances leads through the banking sector. It is one of the most regulated sectors in the economy – and yet it has contributed to government insolvency crisis as EU governments bailed out banks and financial institutions deemed “too big to fail”. (Incidentally, Tirole carefully evaluated inherent problems with that policy already in his 1996 paper where he suggested some incentivizing improvements.)

Jean Tirole tackled the issue of runaway European bank regulation head-on also in his 2012 “reflections on institutional reform from the Euro crisis” (it is very clearly written and accessible even to non-economists). In it he argues that the banking reforms (with an ultimate goal of protecting governments’ budgets) are going in the “right direction (with some caveats)” (p231) and do need to include all the discussed measures:
• broader capital requirements (how risky bank lending should be, on average)
• countercyclical buffer (making sure that banks have more available funds during an economic downturn). This may involve “contingent bonds”, see our recent newsletter for a discussion
• stricter liquidity requirements (how much backup should banks keep in case depositors want to suddenly withdraw)
• attention to systemic factors (dealing with – and predicting – shocks elsewhere)
• better risk measurement (necessarily, different weights are attached to different kinds of asset risks. Tirole criticizes, for example, the fact that Basel II bank accounting rules lowered the weight of mortgages from 1/2 to 1/3)

All this may make it sound like Tirole is no liberal; that he only sees the world through the binoculars of regulation necessary here, there, everywhere. However, one can also see it as a mere illustration of what we could call a “Fundamental Tirole Theorem”: There are no simple rules for regulation. Motivations of each actor need to be specifically evaluated in each situation and optimal paths are usually quite complex. Indeed, this sophisticated “optimization” of regulation, requiring professional tailor-like services of the regulation engineer with his mathematical toolbox, have led some people to see him as a follower of the French tradition inherited from the likes of 19th century Antoine Cournot. After all, Cournot is at least as famous a name as Tirole in Industrial Organisation. And Tirole does share his Alma Mater with the famous social engineer Auguste Comte.

And yet, Tirole retains a very sober view of regulators themselves and their potentially “wrong” incentives. With banks, for example, he cautions that it is “not clear how [the regulator] would assess the riskiness of financial institutions and assets” (p232). He also cautions against the wave of regulators’ opposition to using existing agencies’ ratings. “In the absence of ratings, rumors and privy information in the markets would take center stage” (p231). Careful design is necessary, according to Tirole, also for regulating the regulators.

Tirolean governments would take better care of the deficits

Tirole never loses sight of the ultimate objective: government’s runaway budgets. Even banking regulation is discussed only insofar as it contributes to the governments’ problem. And the problem of reigning in profligate governments cannot be solved by simple measures alone, such as “golden rules” or “fiscal boards” (which we have discussed recently). Once again, the above “Tirole theorem” applies and the quest needs fine tuning.
Just like the banks were considered too big to fail by their governments, so have governments been considered too big to fail by – whom? Tirole recognizes that the original commitment devices have failed (the EU Treaty had ruled out bailouts of governments – to no avail), but it is not immediately obvious to him that it is only other Eurogroup members that should bear the costs of failed promises. Noting that within the narrow European pond the “bad news” may come all at once (and reinforce one another), he calls for a broader, we can even say more “traditional” spreading of risk over a wider international community; especially through the IMF. This must cut both ways, of course: Europe should take a greater share of providing insurance to other parts of the world which may be faced with problems of liquidity (short of cash but fundamentally sound), before they turn into problems of solvency (short of cash and fundamentally unsound).

In a word, no. It is regulating allright, but not in a “clever” way Tirole advocates. It is just big government. And even if you like an economy with a strong social emphasis (as Tirole seems to do), big government is not the way to do it. In the man’s own words spoken a few hours after the Nobel announcement, “We haven’t succeeded also in downsizing the state, which is an issue because we have a social model that I approve of – I’m very much in favour of this social model – but it won’t be sustainable if the state is too big.”

Many Nobelists turn into public policy advocates after their award. This one’s forthcoming message may well turn out to be the following: Even if you are a socialist, there are better and worse ways of going about it. When you regulate cleverly, you may be able to achieve your goals with a slightly smaller state than we tend to have at the moment..