How do you pay for increased government spending on education, health care and social services? By lowering the tax rate, of course… Wait, what?! Oh indeed. A new report on Swedish fiscal developments over the last dozen or so years shows what’s possible to achieve when a country tries to shake off the reputation for Europe’s highest taxes.

Suppose you were confronted with the above chart. It shows that save for the first three years, in every subsequent year the government extracted more money from the national economy than at the beginning of the century. At first we may suspect that perhaps inflation may be at hand. (Media reports of various economic statistics very often neglect inflation, making stories more dramatic than they are). But that is not the case here since everything is measured in constant prices and inflation has already been taken out. The government really does take more from their people than before.

The situation is even worse. There is a slight wave at the start of 2008 financial troubles, but government’s extraction is generally growing year by year. Surely that should leave us with no doubt that tax rates must be rising.

And we couldn’t be more wrong. This review tells the remarkable story of how tax revenue can rise following a fall in tax rate. Not just on paper (or a famous napkin), but in reality.

The graph (and all others used in this article) come from a new publication by Messrs. Mikael Witterblad and Johan Fall of the Confederation of Swedish Enterprise. The report is titled “Tax reductions and public resources”, and the title itself suggests that accounting for the rising government revenue we are not talking about tax hikes but about reductions.

The report is interesting throughout, with lots of poignant graphs and charts to get the feel of the large transformation that Sweden has undertaken in recent years. It used to be the butt of “everyday economics” jokes about tax rates exceeding 100% and was generally considered to be the highest-taxing country in the EU.

Economists have long argued that Sweden had been on the “downward sloping” portion of the “Laffer curve”, meaning that the tax rates are already so high that any further increase will decrease rather than increase tax revenue. Back in 1981, for example, the average (!) Swede faced an effective marginal tax rate of 80%, a rate with which most other EU countries do not punish even the highest earner in the country. Economist Charles Stuart calculated that this high tax rate explained three quarters of the previous decline in Sweden’s GDP growth. High taxes created many high-profile tax exiles, including the IKEA founder. In fact, high taxation had been forcing Swedes out of the country for centuries. As early as 1763 Anders Chydenius, a young Swedish priest, was pointing to high taxes (and that corrupt government that usually accompanies them) as an explanation for Sweden’s high out-migration rate.

We have already seen the increase in tax revenue above, amounting to around SEK 260 billion (around EUR 29 billion) in constant 2012 prices.

The tax cuts associated with the rise in revenue and confirming the “downward Laffer curve” effect were many, including:
• Tax reduction for pension fee
• Earned income tax credit (a form of tax refund)
• Lower social security contributions
• Abolished wealth tax
• Abolished inheritance and gift tax
• Lower corporation tax
• Lower restaurant VAT
(Some taxes have increased, notably on tobacco, alcohol, energy and carbon, but the authors estimate these to have contributed less than 10% of the tax revenue rise.)

The rise in revenue produced budget surpluses which were some of the highest in the world so far in this century. We have recently written about the difficulties of governments to resist the urge to lower tax rates once (cyclical) fiscal surpluses occur (to pay off previous deficits). Here, in the strange world that is Sweden, we must reverse the customary polarity again. The Swedish government apparently must resist the urge to increase tax rates when they generate a surplus.

The surpluses contributed to the sizeable decline in government debt illustrated by the following graph.

The report is objective and does not have an “agenda”. Where tax rates have increased, such as local taxes to finance local government, for example, it says so:

Still, increases in local tax rates are relatively small, especially compared with the scale of decreases in general tax rates. Taxes as a proportion of GDP fell rather remarkably (considering the competition) from 51% of GDP to 44%.

The higher government revenues resulting from lower tax rates have been partly used to pay off the debt and partly to increase spending on education, health care and (to a lesser extent) social security, as illustrated by the following graph. 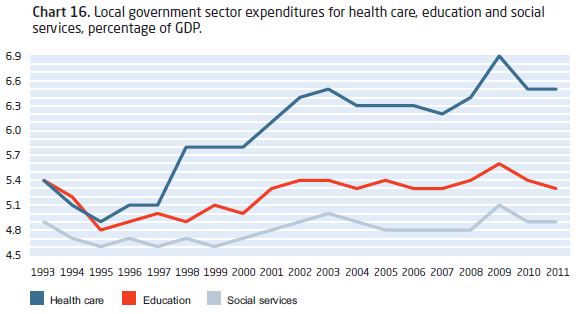 Sweden has proven that lowering the tax rate does not have to be anti-social. It’s up to the government to decide what to do with the surplus revenues.

In fact, decisions on social spending are rather non-centralized in Sweden. Local authorities play a significant role in the decision-making on how the money is spent, which may turn out to be good because access to localized information is better at that level of government. As we have seen, local tax rates did increase in Sweden over the period, but much of this increased local spending still came from the bulging central government revenues: Grants from the centre nearly doubled.

Authors of the report do not try to dabble in explanations behind the trends they observe. Their goal is to present data as objectively as possible. But we do need to interpret their findings.

The tax rate cutting story is not over. It cannot be. Being on the downward slope of the Laffer curve still results in individuals having to pay more than before to the government. The following graph translates the aggregate level on the level of an average Swedish tax-payer. (250K SEK is roughly 27K EUR, or a little over 2,200 EUR per month.)

The fact that the average Olaf continues to pay more and more to the government (in real terms) is actually a horrible finding, any tax rate reduction notwithstanding.

Taxes rates must continue to be reduced at least until the “peak” of the Laffer curve, at which point Sweden will only have gotten rid of something that doesn’t make sense even from the government’s point of view.

Rates should then continue to decline until they produce an actual reduction in tax revenues. Only then will the actual tax burden on the average Swede be reduced.

And if dry statistics do not convince you that that the country has at least started on a good path, consider this: A year ago, much as a consequence of the lower income taxes and the abolition of wealth tax in Stockholm, Ingvar Kamprad, the IKEA founder, returned from his tax exile back home to Sweden. Don’t force the old man out again. Please.

Laffer peak even lower at around 15%
I recall a meeting with the then secretary of the treasury from Slovakia, Ivan Miklos, where he told me, that their research shows, that the peak in Slovakia would be around 15% Income tax. They at least managed to reduce their tax rate down to 19% and it stayed there for about 10 years. Unfortunately the left wing, nationalist government that came to power a few years ago started raising the tax rate up to 22% already – still way below the European average but again steepening the curve…