The “Other” European Banana Problem 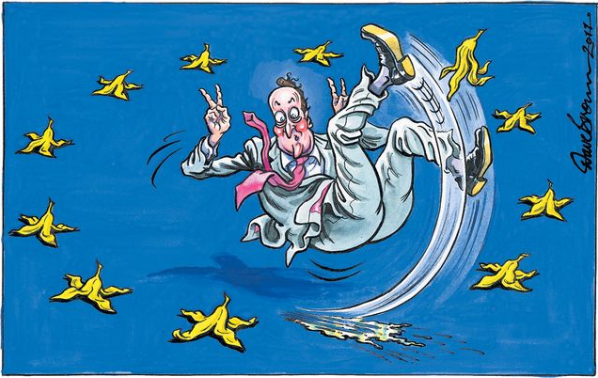 Two decades after the last EU bananagate, it’s going bananas again. EU subsidy programme to bring “fruits, vegetables and bananas” [sic!] to schools is only partly trying to do a “good thing”. Partly it’s changing schools into dumpsters for excess output of oversubsidised agriculture. And the EU Parliament has just infused it with EU propaganda: “EU food good, other food bad”. Orwell’s Ministry of Truth would be proud.

Freudian or not, the European Union has a strange obsession with bananas. First there was the famous “curvature of bananas” EC Regulation of 1995. 20 years later, the European Parliament at the end of May (2015) approved amendments to the European Commission proposal of amendment to Regulations 1308/2013 and 1306/2013. In human language, the EU is upgrading its two subsidy programmes for schools: one for milk and the other – here come the bananas – “for the supply of fruit, vegetables and bananas”.

The subsidies were already difficult to justify, especially as there are other measures available for the little good they do. But now, the amendments have turned the programmes into a tool of propaganda not for healthy eating, but for the EU. That can never be a justified use of taxpayers’ money.

The School Milk programme was first created back in 1968 but did not start running until 1977. The “… and bananas” programme started only in 2009. The size of the subsidies (on top of any underlying commodity subsidies, agricultural land subsidies and various other forms of support to producers of milk and fruits&vegetables) has varied over the years, but generally has amounted to 80 and 150 million EUR per year respectively for milk and fruits&vegetables ( “and bananas…”). It would be even more but three sizeable countries are not participating in the fruit programme – UK, Sweden and Finland. The EU pays around 80% of the cost of fruit for around 8.5 million schoolchildren. The milk programme is even more comprehensive, covering around 20 million schoolchildren.

The stated goals of both programmes have always been twofold:
– To provide a channel for “getting rid of” subsidized overproduction. Both sectors are relatively large components of EU agriculture, at around 15% each.
– To promote “public health context” of their consumption.

Are the goals of the programme valid?

The first goal is pretty difficult to justify for the following reasons:

• EU is correcting a problem EU created. The overproduction which now must be “placed” only exists because of the subsidies and price guarantees. On a normal market, producers would not produce for which they could not get customers. But in the strange world of EU subsidized agriculture, in spite of some reforms it is still generally true that farmers try to maximize production (not profit) since that influences the size of their subsidy.

• Origin should not matter. General preference for local produce in the programme means that cheaper imports generally do not qualify. This means that the programme perversely incentivizes more expensive production. Unnecessarily more of earth’s precious resources are therefore wasted, and non-EU peoples (especially in Africa) are kept poorer than they would be without the programme.

• Competence. Why should it be the EU’s role to secure markets for any products in the economy? EU has always portrayed itself as a (single) market creator, not as a salesman. Demand created by decree is not a market but a diktat.

• Misdirection of investment. According to many economists, the root of the “business cycle” (up and down swings in economic output) are caused by energy being put either into – direct or round-about production: either you create your product directly with whatever tools you have at hand, however imperfect, or you put your energy first into producing better tools (machines, capital) and only then start creating your product, more easily but “roundabout”. Traditionally, changes in interest rates are seen as the culprit creating such business cycles, but this EU policy can do just the same. Orchards are not only sizeable investments, they also take years to fructify. The same applies (perhaps to a lesser extent) to the milk industry. These subsidies can disappear relatively quickly, and farmers who increased capacity because of them will have been led to a cul-de-sac.

The second goal may have some merit. If the programmes do lead to improved health outcomes for children – immediately or later in life – some health costs will be prevented.

In light of this motivation, however, the policy does not seem to have had brilliant success. Of course it is difficult to know what would have happened without the policy but the fact remains that both milk and fruit&veg consumption per capita continues to fall, as they are replaced by more processed food in people’s diet.

The old text of the regulations was mostly straight-forward. It stated its goals (discussed above) and then got on with specifying how the programme should be implemented.

On 29th May, however, the European Parliament introduced many amendments which have less to do with getting kids to eat their “five a day” but more to do with propaganda.

• Food-related propaganda. The programme will now finance not only the agricultural produce, but also on “cultural programmes” (10-20% of the budget – Amendment 32). Schools should now educate children not only in “uncontroversial” topics such as healthy diet, but also in more debatable ones such as “local food chains, organic farming and sustainable production” (Amendment 21). If Bananas (again!) cannot be sourced from the EU, schools are encouraged to prefer “fair traded” ones (Amendment 23). Children will now be also subsidized to “visit farms” to see the cows.

– Use of taxpayers’ money on these info campaigns is questionable at best. Organic farming and sustainable production, at least as they usually enter contemporary public debate, are more about ethics than definite “scientific” benefits. Arbitrarily subsidising local food chains violates the principles of a single market.

• EU propaganda. A number of amendments mandates schools to advertise heavily the link between “healthy food” and “brought to you by EU”

– This propaganda is not justifiable and should not be subsidised because it is misleading: Good schools are encouraging healthy diet because it is good; at the same time they would be silly to reject money for what they are already doing. Having done so, however, they would have to falsely claim that they are offering healthy diet “only because of the magnanimous wisdom of the EU”

The most atrocious propaganda measure is this, from Amendment 37:

“Member States shall ensure the added value and the visibility of the Union school scheme in relation to the provision of other meals in educational establishments.”

Generations have fought against segregation around the planet. Now the EU is introducing segregation between “food sponsored by EU, the good food” and “other meals, the bad food”. Four legs good, two legs bad.

“In order to raise the profile of the scheme among those who benefit from it throughout the Union, it should be given a single identity and a Union logo, for compulsory use on posters relating to schools’ participation and in information materials made available to pupils under the accompanying educational measures.” (Amendment 11)

“Member States participating in the school scheme shall publicise, at the places where the food is distributed, their involvement in the scheme and the fact that it is subsidised by the Union, by way of posters at school entrances. Member States may, in addition, use any suitable communication medium such as dedicated websites, informative graphic material, and information and awareness-raising campaigns. A common identifier and Union logo shall be used on all accompanying information material.” (Amendment 37)