So-called “neoliberalism” is nowadays more often than ever the scapegoat of anything wrong happening in contemporary democracies: from economic crisis to increase inequality, from the rise of populism to environmental catastrophes. Those who criticise it assume that support for laissez-faire economic liberalism and free market capitalism is basically widespread all over the world in the political elite. Yet, taking something for granted does not imply that it necessarily corresponds to reality. It is therefore interesting to understand how pro-market ideas are actually “popular” worldwide, compared to how they were in the past. Are we witnessing an increase of such popularity? Or a decline?

One way to answer these questions is to focus on the salience given by parties to pro-market positions when they want to present themselves in front of the general voters. For doing that, we have taken advantage of the data available from the Manifesto Project Database (MPD). MPD has codified basically the electoral programs of parties worldwide (or almost so) since the Second World War. The codification stage employed by MPD consists in taking an electoral program, dividing it according to its sentences, and then assigning each sentence to a specific policy category. Among the set of policy categories considered in such coding procedure, several are related to the economy, including categories that are clearly pro-market (such as favourable mentions of free enterprise capitalism, private property rights, personal enterprise and initiative, free trade, reduction of budget deficits, etc.). Other categories are clearly pro-state (such as mentions related to market regulation, economic planning, controlled economy, nationalisation, etc.).

Out of such categories, we have decided to build a Pro-Market Index (PROMI) by summing up all the sentences related to the pro-market categories, and then subtracting from such value the sum of all the sentences related to the pro-state categories. As a result, we have created an index that records a positive value whenever the references to pro-market issues in an electoral program are more frequent than the references to pro-state categories, and a negative value otherwise.

Then, we have estimated the value of this the index for all the elections in each country included in the MPD dataset since 1945 by taking the average of the values recorded by the parties running in each particular election with respect to PROMI. Of course, each time we have weighed such index for the relative size of the parties (after all, large parties matter more than tiny ones). As a result, we have produced a value of PROMI for each country over a relatively long period.

In Figure 1 we show the evolution of PROMI over decades averaged over all the countries. Some findings are remarkable. First, PROMI always records a negative value, except for the 80s, and only if Western-European countries are excluded. Second, apart from the fifties, eighties and nineties, PROMI is rather unbalanced in favour of a pro-state vision. Third, in the last twenty years, the economic pendulum, at least in parties’ electoral programs, clearly favours the state rather than the market. This is particularly evident after the 2008 crisis. 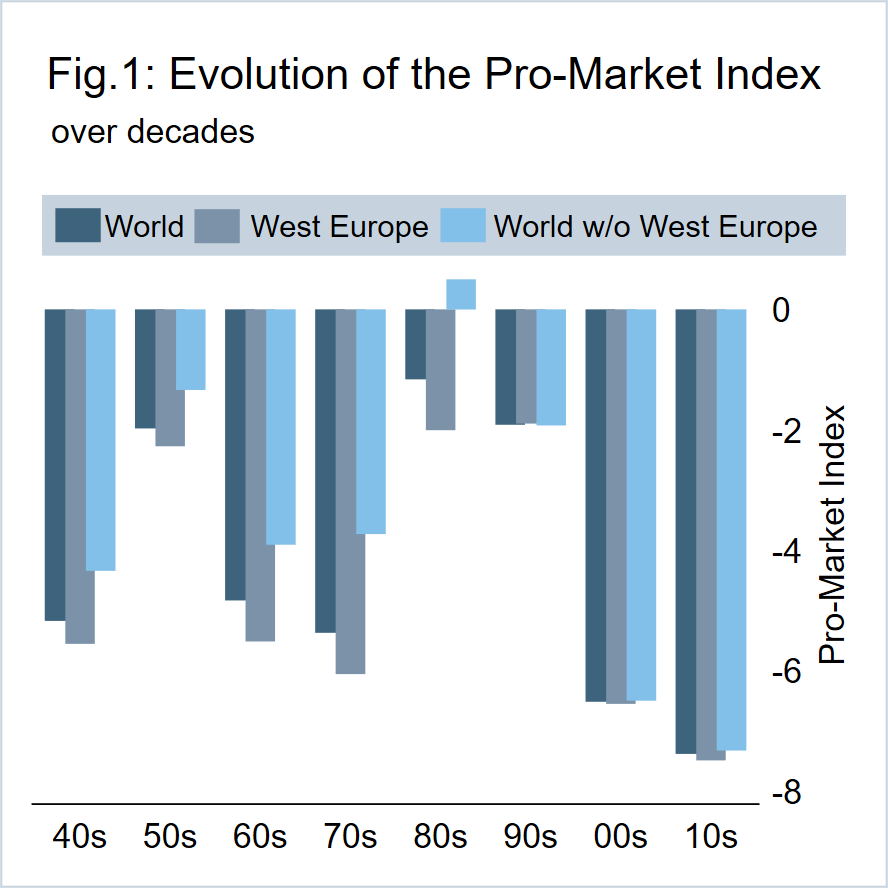 What about the geographical dispersion of PROMI? Figure 2 shows this distribution worldwide (as long as a country is included in the MPD dataset), by considering the average value of PROMI since the second world war up to nowadays. As can be seen, only six countries record a positive value: Australia, United States, Iceland, Montenegro, Austria and Denmark (sorry Senator Sanders!). On the opposite side, among the countries that record the most negative value in PROMI we have, among the many others, Finland, South Africa, Bolivia, South Korea, and Romania.

What about the evolution of single countries over time? In Figure 3 we compare that for 5 countries: United States, Japan, Germany, United Kingdom, and France. AS the graph illustrates, only Japan has recorded a clear upward trend in the last years. Moreover, the United States show a rather stable trend, although slightly declining since Obama presidency. Finally, and in spite of Margaret Thatcher (and Tony Blair), overall the British party system appears to remain rather refractory to pro-market ideas. 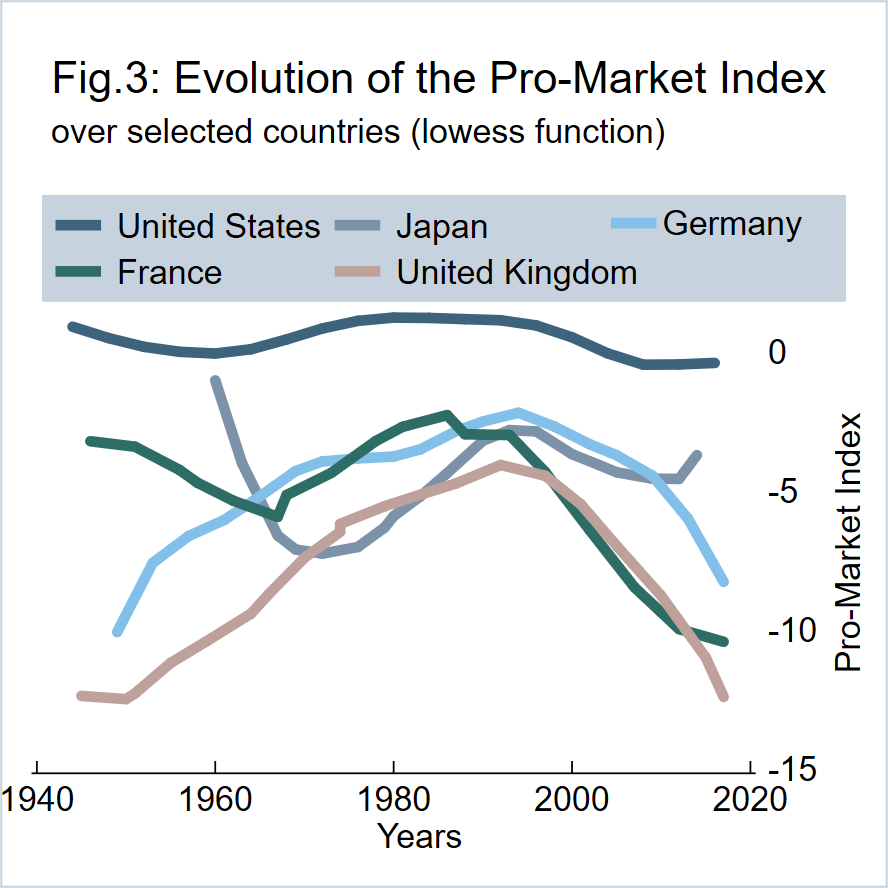 Of course, governments implement economic policies (including any neoliberal policies), subject to domestic and international constraints. And there is a clear difference between actions and words (written, for example, in an electoral programs). Yet, our results show that, if anything, neoliberalism has never been popular among parties in the last 70 years. And now even less than ever. 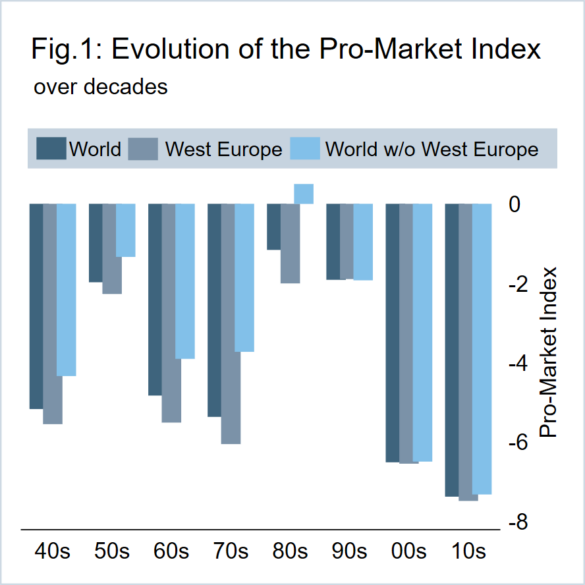 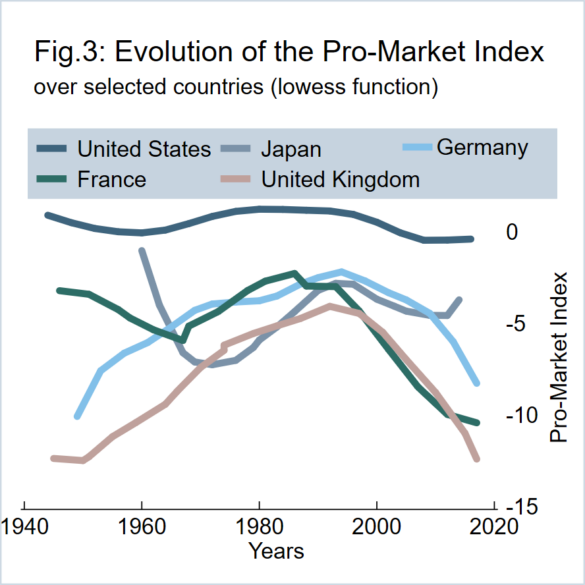