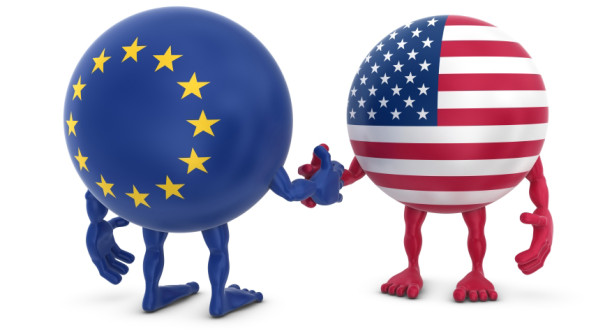 Transatlantic Trade and Investment negotiations are resuming. Popular support varies across Europe, we identify four distinct groups. Removing trade protectionism will generally benefit ordinary people. However, some protectionism may increase, especially in investment chapters. If governments rather give in to corporations than risk being sued by them frivolously, corporatism will strengthen, not weaken.

On Monday February 2nd, the week-long 8th round of negotiations on TTIP begins. In case you haven’t heard, it stands for Transatlantic Trade and Investment Partnership. Sometimes it is reported as “Free trade deal” though it seems to be much more than that. The trouble is, commentators have had to rely on unofficial leaks of documents because the negotiations have generally been behind closed doors. (Some documents were officially released by the European Commission on January 7th, 2015, long after the negotiations should have been originally concluded.) This lack of transparency only fuelled the imagination of various pressure groups and lobbyists who have managed to convince large parts of the public that it is just “big business” trying to collude, through EU/US governments, against the consumer and the public at large.

This article reviews the measured support for TTIP across Europe and considers realistically what TTIP can bring about.

How popular is TTIP?

European Union frequently tests its image among the public in individual Member States through a Eurobarometer survey. The one published last November had included the question whether the respondent is “for a free trade in investment agreement between the EU and the USA”. The results are shown in the picture. 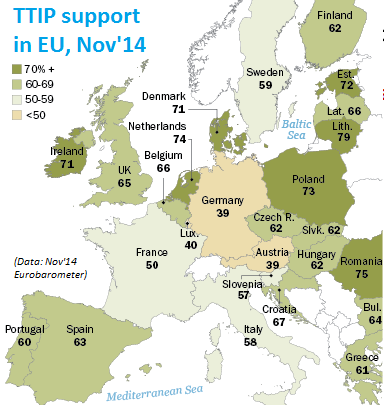 The colour coding in the picture is slightly misleading – there is actually very little difference between support in Italy and Portugal and Greece, in spite of different colours. There are basically four groups in Europe:
1. “The Keen”: The heaviest support is concentrated in countries which were in, or at least border, the former Soviet Union. And in Ireland and the Netherlands, but that may have more to do with the strong family links most Irish have with the US (and the Dutch with New York).
2. “The Lukewarm”: nearly everyone else shows support between 57% and 65% and it does not matter whether they are Mediterranean, Scandinavian or landlocked central European.
3. “The French”: a one-member category with a comparatively low level of support of trade (and some tradition thereof).
4. “The Germanic”: perhaps most surprisingly, the lowest (by some margin) support has been measured in German and Austria (and Luxembourg).

Is there enough information?

Interesting though the data may be, it may not be fair to try to derive some general theory to explain the groupings. It is not clear whether respondents have comparable idea what TTIP is likely to be about, as official details were few and the talks are yet to be concluded. People may be for the deal because they know much, or indeed because they know little detail. While in the UK, for instance, protests by interest groups make regular headlines, in post-communist central Europe most people will probably not even have heard of TTIP.

The “Germanic” case does, however, call for at least some accounting. Our German site has recently published a piece [in German] analysing the generally high level of support TTIP enjoys among the German industry associations. A non-German reader may perhaps find this support unsurprising: given the reputably high German productivity (fuelled also by the Euro being weaker than the Deutschmark would have been), opening American markets is more of an opportunity than threat for German industry. But the article paints a more subtle picture. Given their broad reach stemming from the post-war situation, German industry associations take consumers’ interests more into account than in other countries. (Although the Eurobarometer perhaps questions slightly the German consumers’ appreciation of the benefits of free trade.) Equally, however, the associations may be looking forward to TTIP creating a single regulatory framework. German and American companies would have to work to the same standards – which is another way of keeping out third parties. Indeed, this path is already proving very successful in the EU in keeping away those who do not produce to, and by, the unified European standards.

So wait, is the TTIP pro-trade or pro-regulatory standards? A bit of both. After all, it is a “trade and investment” partnership.

At face value, Euro-American free trade deal seems futile. Decades of GATT/WTO negotiations have reduced world-wide tariffs to very low levels, although much of the recent reduction of protection concerned economies less developed than EU/USA. Remaining average EU/American tariffs are under 3%. However, that’s just the average. There are large sectors where significant tariffs remain, most notably agriculture. If WTO cannot remove them, it is unlikely (though yet to be seen) that TTIP would succeed.

A much more important part of the talks are “non-tariff barriers”. Even outside agriculture, there are various schemes on either side to promote buying “local”, including in government procurement. The EU itself keeps struggling to promote the idea of a single market without prejudice within Member States, let alone to the outside world. Once again, it is probably doubtful that the talks would succeed in removing the bulk of such “domestic biases” embedded increasingly on both sides.

The Euro-American trade is worth around €0.9 trillion (million million) every year, i.e. around €1,000 a year per person. The Economist magazine estimates that removing the remaining tariffs would raise the American and European GDPs by 1% and 0.4%, respectively. But the non-tariff barriers are even more important, halving them is expected to increase both GDPs by 3%. For Europe, that translates to roughly €770 per person on average. (Not all of this will, of course, would trickle down to consumers through reduced prices of goods and/or increased wages, though people in rich EU countries stand to gain more in absolute terms.)

Annual investment flows between US and EU are about four times the volume of trade. Quite tellingly, in contrast to the trade part, the talks seem to be not about removing protection, but about securing protection.

Again, at face value all seems to be well: companies will be protected against arbitrary decisions and discrimination, especially by the recipient country’s government. So far so good, but the devil will be in the detail. Leaked documents suggest that dispute tribunals would take into account “whether a government created a legitimate expectation”. It’s terms like these that shift the problem from actual arbitrary misuses of power by governments into the realms of legal fancy, where “legitimate expectations” are determined by the skill of lawyers rather than facts.

Contemporary governments are already very much corporatist in nature on either side of the Atlantic, willing to play into the hands of big business, especially when magical concepts like “investment for the future” are involved. They should not be able to discriminate against companies. At the same time, however, companies should not be able to find it too easy to sue governments for “legitimate expectations”. If that does become too easy, governments may be forced to fulfil such “expectations” even when they turn out to be bad for the taxpayer. Paradoxically, an ability to threaten governments with expensive arbitrage and lawsuits would only strengthen, not weaken European and American corporatism.

Greek debt servicing is not at all crippling