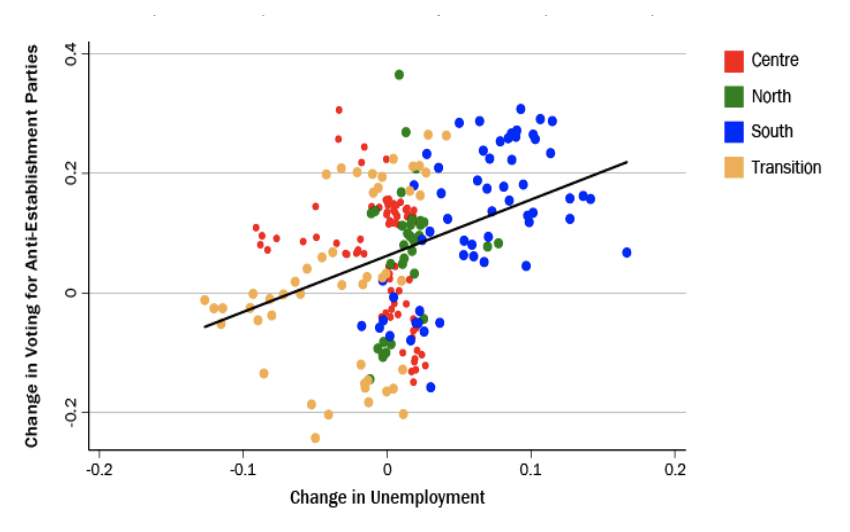 If one wonders what Donald Trump, Marine Le Pen, Jeremy Corbyn and Matteo Salvini have in common, the answer is that each of them has been labelled populist, a word whose meaning is therefore being diluted as a result of loose usage. As emphasized by the BBC commentator Lionel Shriver, starting from Brexit the term populism has been used to lump together disparate national movements. In particular, the word has become a polite code for racist, xenophobe, ignorant, and so on. Emmanuel Macron – in turn accused by some of being himself a populist – has recently urged Europeans to fight the leprosy of Populism.

In short, not only does it seem that everything unconventional has emerged in the European political arena in recent times is inspired by populism, but also that such allegations are used to delegitimise political opponents. According to Dani Rodrik, support for such alleged populist parties has dramatically increased in the last thirty years (see Figure 1). 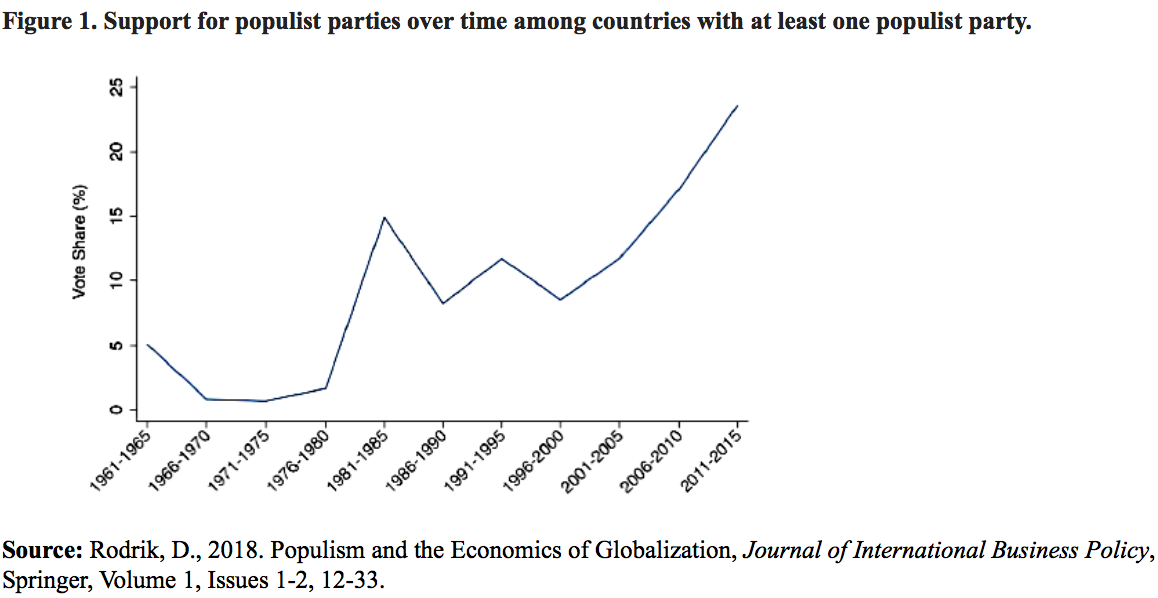 Yet, what do we actually mean by populism? Why has this term become so popular? And should we expect that these populistic movements will be producing substantial changes in the political arena?

For a populist party the main source of inspiration and the constant term of reference is the people, considered as a homogeneous social aggregate, the exclusive depositary of positive, specific, and permanent values. According to the Oxford Dictionary of Politics, a populist party defends ordinary individuals against changes imposed by powerful outsiders – variously identified as traditional governments, big business, or other organizations.

Populism can be exercised at different levels of intensity. Beyond a certain threshold it is certainly illiberal, as illiberal were, for example, the fascist regimes of the thirties. Below this threshold, Populism can present itself with different nuances, more or less dangerous. Its rhetoric is, in many cases, more triggered by political calculus rather than by the conviction about the truth of the arguments supporting the rhetoric itself.

Is Europe Being Contaminated by the Leprosy of Populism?

In September 2008, the bankruptcy of Lehman Brothers triggered a major financial crisis followed by the sovereign debt emergency in Europe. The resulting economic downturn led to an impoverishment of the middle class and, more importantly, to general pessimism about the future. As often happens in these cases, instead of clarifying the roots of the problems, many political leaders have chosen the look for external and vaguely identified enemies: the world of finance, the European troika, China, Globalization and so on. History tells us that in periods of uncertainty, people find it convenient to regroup against common enemies (Germany in the ’30 is the obvious example). This is the sea where politicians go fishing (see Figure 2). 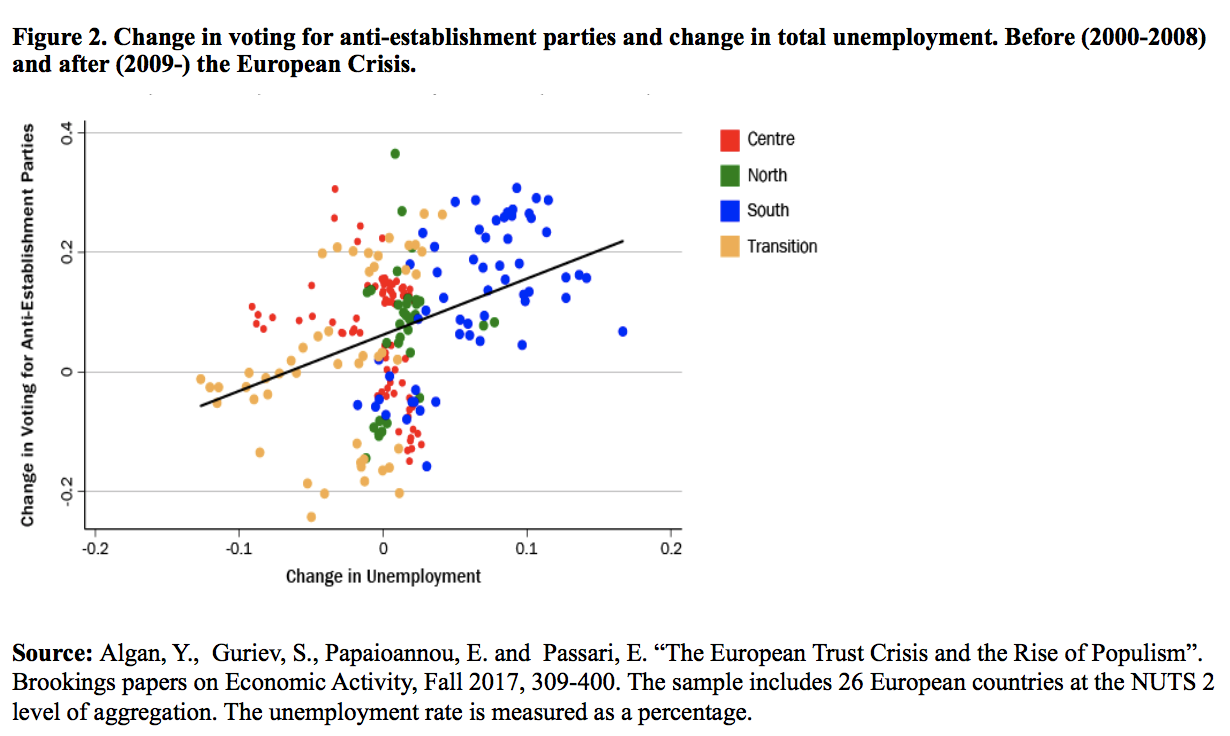 As politicians fish in the same sea, one might suppose that they use the same type of bait. This supposition is wrong, however. The bait indeed depends on the peculiar situation of the society under consideration; on which fears can be advantageously triggered by politicians; on whom can be identified as culprit.

Populism and the Left-Right Paradigm

In a recent paper, Yann Algan, Elizabeth Beasley, Daniel Cohen and Martial Foucault argue that one of the main consequences of the recent burst of Populism has been the collapse of the traditional Left-Right political paradigm that has prevailed since the end of World War II. They illustrate the point by examining the recent French Presidential Election. Their main argument is the following. They assume that the key difference between the political right and the political left is the attitude regarding income and wealth redistribution. Thus, one would expect stronger support for left-wing parties (in favor of redistribution) when one’s income decreases; and vice-versa. Yet, since the available evidence shows that in the last French Presidential election individual’s expressed preferences (votes) were not correlated with income – Marine Le Pen’s and Mélenchon had very dissimilar views on redistribution although their typical voters have analogous socio-economic status – they conclude that the Left-Right distinction has come to an end, because of Populism that cut the link between socioeconomic status and desire for redistribution.

Algan and colleagues jump to conclusions too quickly. First, as far as demand for redistribution is concerned, a robust strand of (experimental) economic research shows that income levels play only a minor role or no role at all. Hence, the argument that individuals’ preferences for redistribution would no longer be correlated with income because of Populism is weak, to say the least. Second, even if one assumes that voters are motivated only by self-interest, poorer people may oppose redistribution if they believe that this redistribution is fraught with wastes and fraudulent situations; and that will not change their purchasing power significantly.

To summarise: there is a long-standing debate among political-science scholars about the nature and usefulness of the Left-Right distinction. It does not seem that the recent burst of so-called populist parties has really changed the terms of the analysis. Protesting against the status quo is a powerful element. Nonetheless, one should acknowledge that the so-called populistic parties are quite prone to accept the world as it is once they are in power, and to forget all their revolutionary purposes. 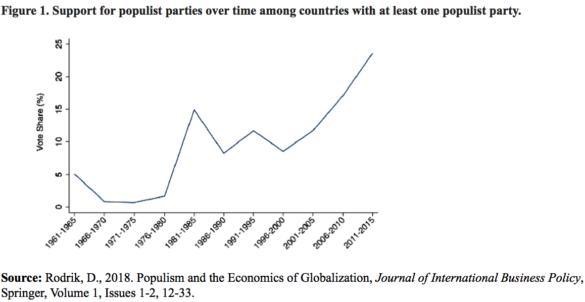 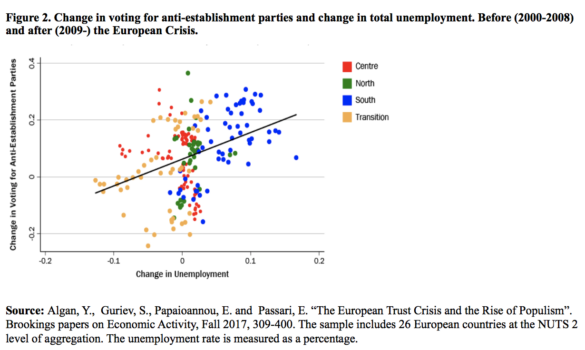